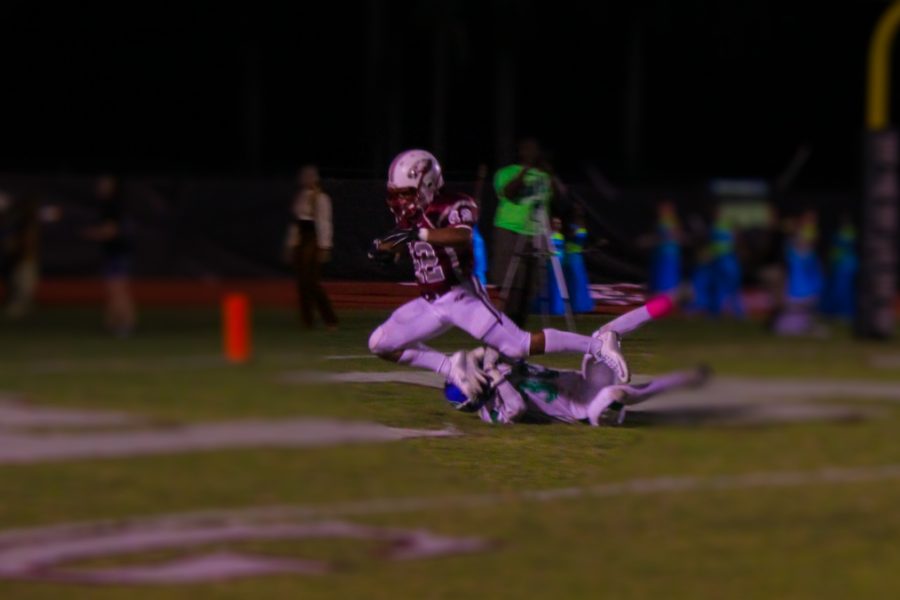 The seven-year drought came to an end as the Varsity Eagles dominated the Coral Springs Colts in a 35-0 at Cumber Stadium on Friday, Oct. 2 to win the annual Pig Bowl.

The Eagles were led by running back Lance Moise (24) and safety Owen Minott (12). Moise led the offense with a rushing touchdown along with quarterback Tyler Goodman (1), who also added a rushing touchdown and threw a touchdown to wide receiver Tai Lehtio (88). Minott (12) led the defense with two interceptions, including the interception that put the Eagles up 35-0. The team also got a boost from kicker Jared Hollander (4) who made all of his extra point attempts.

The game was like a “pig off of their back” according to Coach Willis May, who won his first pig bowl as head coach.

No player felt better than Moise who beat Coral Springs for the first time. For Moise, the best part of the victory was winning the game “in the Eagles nest.”

The victory put an end to the annual smooch between Principal Ty Thompson and his pig buddy. Thompson has kissed the pig every year since becoming MSD’s principal.

“It was very gratifying to beat Springs after having them on the ropes last year and not pulling them out,” said Thompson.

When the clock hit zero the long week of preparation cultivated into a huge win against the Colts. The win avenged last year’s loss, which knocked the Eagles out of the playoffs. The game marks the first win of the season and the first game that counts towards the team’s district record. Their 2015 record is 1-3.