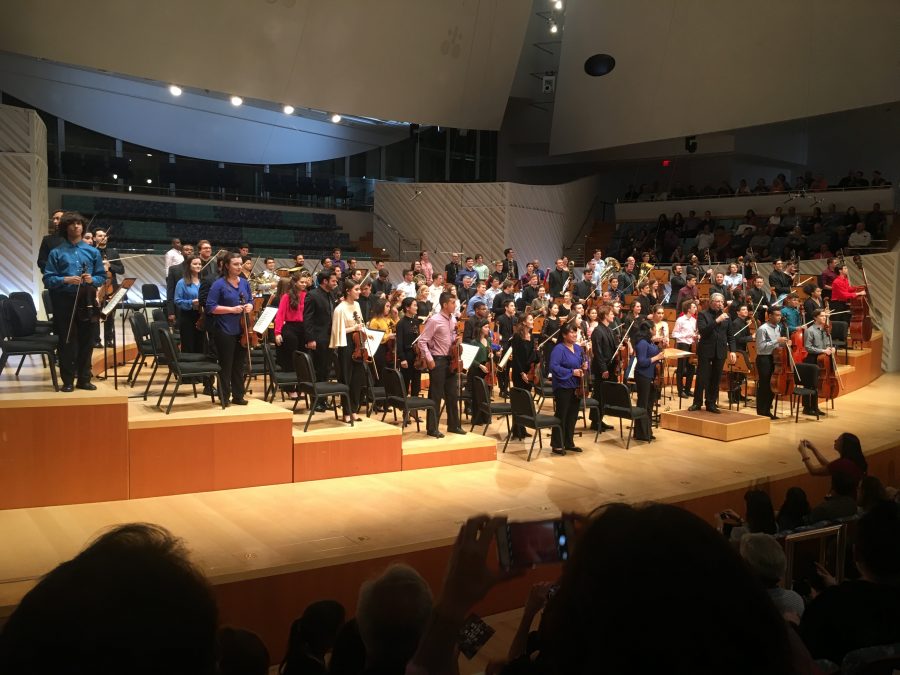 Student musicians perform with the New World Symphony at the Side-by-Side Ensemble concert.

The New World Symphony offers advanced string, woodwind, brass, piano and percussion students in grades 7-12 the opportunity to audition to be apart of the Side-by-Side Ensemble.

Musicians that found out if they got in on January 18, 2019, were then asked to complete a live audition on February 17 to determine which parts they would be playing in each piece.

“When I found out I was accepted I was extremely excited because I was going to be able to play with amazing musicians and I would hopefully be able to learn a lot from them,” Leonardi said.

The Side-by-Side ensemble met at the New World Center five times to practice in the two weeks leading up to the concert. Four of these practices were three hour practices and the final was an all day rehearsal on the day of the performance.

The concert began at 8 p.m. and ended at 10 p.m. The ensemble performed George Washington Bridge by William Schuman, Adagio for Strings by Samuel Barber and Concerto in B-flat major by Wolfgang Amadeus Mozart before intermission, and finally Symphony No. 2 in C minor by Pyotr Ilyich Tchaikovsky. All of the pieces were played under the direction of Co-Founder and Artistic Director of the New World Symphony Michael Tilson Thomas, except for the Adagio for Strings, which was conducted by Conducting Fellow Dean Whiteside.

“Rehearsing and performing with people of such a high caliber was such an amazing and inspiring experience,” Archer said.

The New World Symphony Side-by-Side gives students the opportunity to play alongside trained musicians and other young musicians that are passionate about music. The Side-by-Side Ensemble Concert is an annual event with further information about audition requirements and important dates on their website.