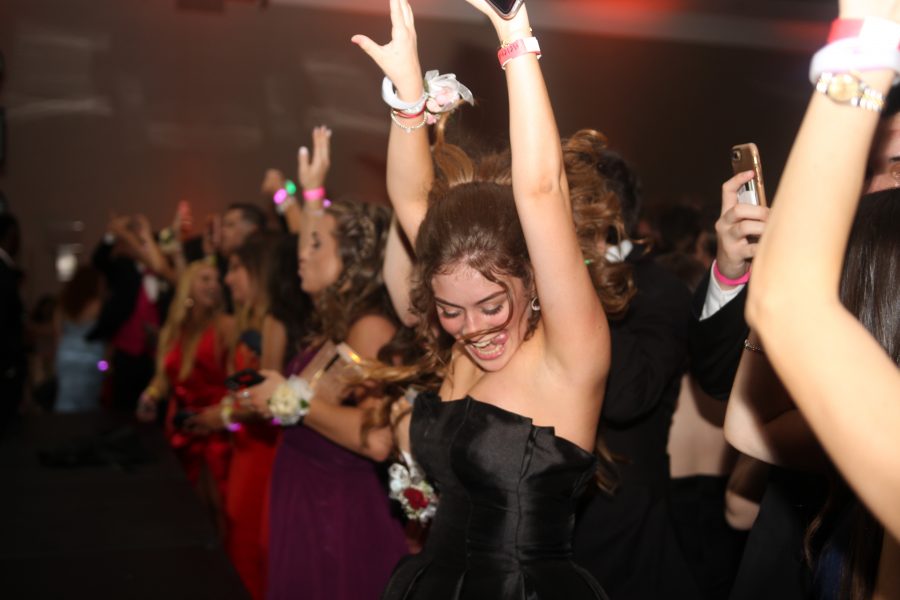 Dancing Queen. Senior Helena Denny dances at prom on May 11 at The Westin Ft. Lauderdale hotel. Photo by Nyan Clarke

Dancing Queen. Senior Helena Denny dances at prom on May 11 at The Westin Ft. Lauderdale hotel. Photo by Nyan Clarke

On April 8, leadership teacher Danielle Driscoll made an announcement to the student body that the senior class of Marjory Stoneman Douglas High School had won a special prom through a Hollister contest.

For the first time, Hollister held a contest for high schools around the country for a chance to win the ultimate prom. From Feb. 15 to March 15, schools fought to be the recipient of this award. Students and community members signed up through the Hollister website and nominated their school. From the entries, Hollister chose the school with the most number of votes.

“Marjory Stoneman Douglas High School was the winner, receiving more than a quarter of all the votes cast for the top ten schools,” Hollister’s media department said in a statement.

Hollister promoted the contest via social media, such as Twitter and Instagram. The ad was a poster with the details linked. In these details it stated the rules, regulations and prizes of the contest.

Instead of receiving a check for the amount announced by Hollister, the money was distributed throughout several aspects of the prom budget. Decorations to go with the Ancient Greece theme and prom swag bags were provided, in addition to the those already picked out by the senior class board. Some of the money was used to reduce the ticket pricing from $125-130 to $73-$88.

Hollister also donated $5,000 dollars to MSD in addition to cover the costs for a professional performer to play live at prom. When this aspect was revealed, many students believed Khalid, the celebrity on the contest’s advertisement, would be at their prom.

“I think the special guest will be Khalid because he is sponsored by Hollister,” senior Nyla Hussian said before  attending prom.

That was not the only rumor of the prom season. Prior to the announcement that was made about MSD winning the special prom, there was also speculation among students that MSD had lost the contest and the ultimate prom would go to the runner-up school; these rumors were debunked by Driscoll when she announced that MSD had in fact won.

“There was never a point in time when Hollister called us and said ‘you won’ and the district was saying ‘you didn’t’,” Driscoll said. “That never happened.”

Leading up to the day of prom, Hollister did not release the name of the performer, but had them surprise students on the special night. DJ Cash Cash came out to perform forty five minutes after prom began.

“I loved DJ Cash Cash, he played the best music and made the room bounce,” senior Camden Lander said. “I would definitely recommend he come back for another dance.”

As the night came to an end, the 800 students in attendance made their way out of the venue, most people with swag bags in their arms and smiles on their faces.

“Prom was awesome. Super happy with how everything turned out,” Senior Class President Jaclyn Corin said.