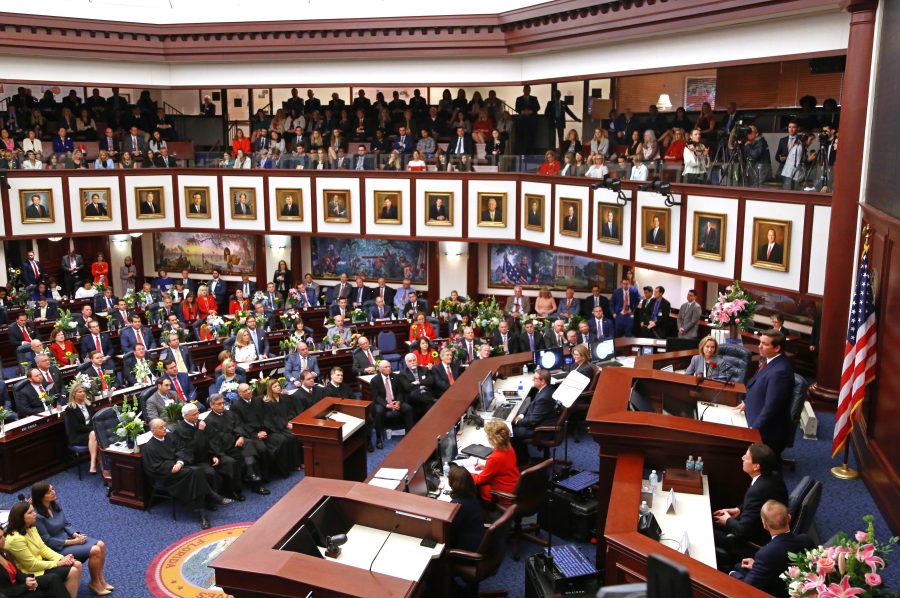 The 2019 Florida Legislative Session began on March 5, 2019. These sessions occur annually on the first Tuesday of March and last for 60 days consecutively.

Both the upper chamber, the Senate, and lower chamber, the House of Representatives, of the Florida legislature convened to pass new laws and amend or repeal those that are already in place.

With this session being Gov. Ron DeSantis’ first since taking office, DeSantis constructed a budget of over $90 billion focusing heavily on education, environmental issues and health care.

SB 292 is a two-page bill that bans a school district from preventing students from wearing the dress uniform of any U.S. Armed Forces at graduation.

“A district school board may not prohibit a student from lawfully wearing the dress uniform in any of the Armed Forces of the United States or of the state at his or her graduation ceremony,” the bill said.

The bill was introduced by two Hillsborough County lawmakers after an incident at Newsome High in Lithia, Florida. Senior Emily Olson had finished her basic military training and wanted to dress out for graduation, in order to show her achievement in the program. However, the school board rejected her proposal, stating that she had to wear the traditional cap and gown.

“That just sparked a very uncomfortable conversation with the gentleman who is leading the coordination with the graduation ceremony who was quick to tell me that even though he served in the military, that nobody would be able to wear their uniform,” Olson’s mother, Julie Abueg, said according to Spectrum News 9.

The bill passed unanimously, 115-0, and is awaiting DeSantis’ desk.

SB 294, or the Educational Facilities bill, authorizes school districts to use funds from a taxpayer bond referendum for the construction of educational facilities, in the absence of a survey recommendation; it also prohibits a school board from using funds from any source other than specific local sources.

SB 294 is not the only bill that references tax referendums. House Bill 7123, sponsored by Republican Rep. Bryan Aliva, allows tax referendum funds to be distributed between public and charter schools based on the number of students. The controversial factor in this bill is the fact that charter schools receive government and taxpayer funding, yet are privately-run. Taxpayers in 24 Florida counties approved referendums to fund their local schools. Some of the referendums specifically directed the funds only to traditional public schools and not charter schools.

“It’s another attack on local control,” Collier County School Board Chairman Roy Terry said, according to the Naples Daily News. “They’re taking away the ability of local elected officials to determine what is best for the schools in their district.”

On the other hand, numerous charter school board members, such as Marco Island Academy Board Chairwoman Jane Watt, appreciate that the Legislation is guaranteeing their funding rather than having the school districts decide.

“We have a ton of funding just to survive,” Watt said in an interview with reporter Rachel Fradette. “We should be receiving equitable funding, not excluding.”

The bill was passed by the House with a vote of 69-44 and will affect many school districts all over Florida for all future tax referendums.

Another passing bill is SB 7070, the Potential Train Bill, which establishes the Family Empowerment Scholarship that allows a larger amount of students to attend private schools under scholarships paid for by taxpayers, as well as create new private school voucher programs. The scholarship will be given to up to 15,000 students each year.

The Potential Train Bill passed with 76 ‘Yays’ in contrast to 39 ‘Nays.’ However, there are many critics of this new bill. A very similar bill was passed with the help of former Florida Gov. Jeb Bush in 2006, yet was ruled unconstitutional by the Florida Supreme Court later that year.

Due to this Florida Supreme Court case, Bush v. Holmes, there is a stigma surrounding how the bill will progress once it reaches the judicial branch. However, DeSantis appointed three new conservative justices at the beginning of this year, which some anticipate will change the results.

“The notion that the very clear Florida Supreme Court precedent is going to be disregarded here simply because there are new justices on the court honestly is an insult to all of those new justices,” Democratic Rep. Joe Geller said, according to the Tampa Bay Times. “They will reject this law as unconstitutional as the previous iteration was rejected.”

On the other hand, bill supporters liken these programs to the scholarships of universities that are funded by the state, yet can be used at private colleges.

“Frankly, the time for political posturing is coming to an end, and now it’s time to do what is right for our middle-income and low-income families in the state of Florida,” House PreK-12 Appropriations Chairman Chris Latvala said in an interview with Orlando Weekly.

SB 7070 will also develop a program that specializes in recruiting good teachers in high-demand subjects, the Best and Brightest program, and get rid of the SAT/ACT test-score requirements which currently dictate which teachers receive the top bonuses.

Nonetheless, numerous teachers have been opposed to this program, as they want a raise in pay, not an alteration in a bonus, which is a one-time transaction. Among others, English teacher Lauren Rower is against the program, even with the discussed revisions.

“I think it is important to evaluate teachers and make sure that they are effective in the classroom. I know recently that there were some changes to [the program], essentially what money we receive for being effective has been decreased,” Rower said. “The idea that we dedicate so much time and put in so much effort and even when we are seen as being the best at our jobs, we are still not given this credit where it is due is pretty hurtful.”

In response to the bill, various Democrats have proposed over 45 amendments, all which were denied or withdrawn.

The highly controversial Senate bill, SB 7030, Arming Teachers and Guardian Expansion, was passed during this session after a two-day debate and was signed by Gov. DeSantis. SB 7030 allows a sheriff to institute a Guardian program in schools, in which teachers can be trained to use firearms, requires a school district to encourage the usage of an app to report suspicious actions and requires the implementation of the legislative recommendations of the Marjory Stoneman Douglas High School Public Safety Commission.

“Instead of helping fix the problem, they’re only adding fuel to the fire,” sophomore Jessica Virk said. “There are so many things that could go wrong; it’s scary.”

Various teachers are also against this bill.

“It is terrible that the people who are supposed to represent us in the legislature ignore our wishes when it comes to issues like this,” Hospitality teacher Mitchell Albert said. “I have no intention of ever carrying a gun in school and do not feel safer because of this law. If you pass a law requiring universal background checks–which, by the way, 90% of Americans support–would keep weapons away from those who want to use them for nefarious purposes.”

However, Broward County Public School Superintendent, Robert Runcie, stated that the school board will stick with their decision not to arm teachers.

“The Broward County School Board voted on a resolution against arming teachers in March 2018,” Runcie said in an interview with the Miami Herald. “We do not believe arming teachers is the best way to make our schools safe.”