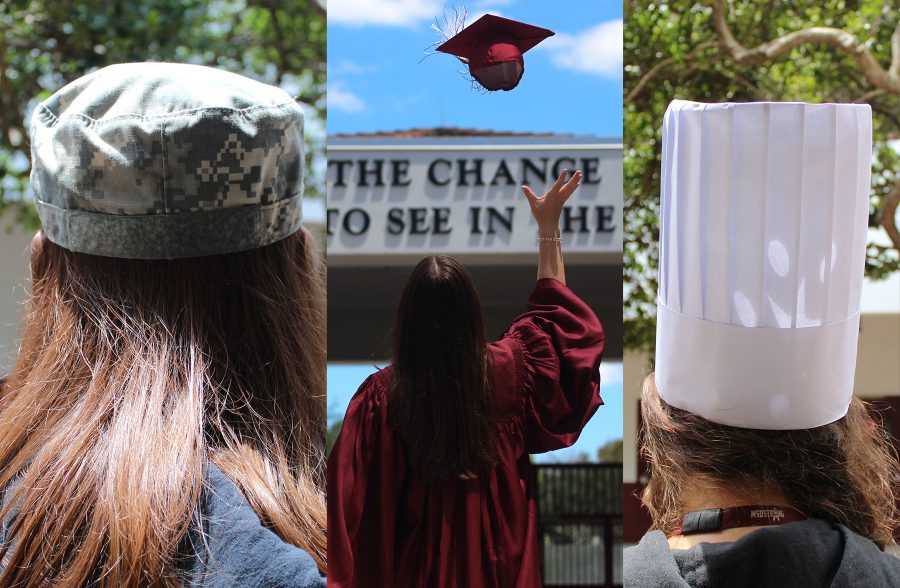 For many students, the end of high school means the beginning of the next chapter of their lives: college. However, some students today are breaking from the traditional four years of school and taking an alternative route. Whether this includes heading into the military, taking a gap year or heading directly into the workforce, some students feel that succeeding in life does not necessarily mean getting a college degree.

Many students often take into account external factors such as grades, if their parents or siblings went to college and the cost itself. According to the U.S. Census Bureau, just 33% of adults 25 and older have a bachelor’s degree or higher.

Oftentimes, students take an alternative route due to the excessive cost of college. According to the College Board, the average cost of college tuition for the 2017-2018 school year was $9,970 for in-state residents at public universities and $25,620 for out-of-state residents attending public universities. Many students feel that these high costs simply outweigh the benefits of a college degree because of the burden of college loan debt.

Some students choose to enlist in the military. Members in active duty receive a salary, access to a wide variety of government benefits such as free healthcare, generally low living costs, access to travel the world, and retirement benefits after 20 years of service. The military will also pay for college tuition for service members.

Another option that students choose after high school is a gap year before attending college. Taking time off between high school and college can help some teens explore the “real world” and who they are as a person. Students can spend this time interning, volunteering, traveling or working to save up money for college.

“So far my gap year has opened my eyes in a million new ways,” Alumna Julia Salamone said. “I have such a broader world understanding from being in a totally different context from my own, and meeting people from Brazil, and all over the world, through my program. I am definitely more confident and assertive now, and feel more myself in general.”

Another alternative route that students have after high school is enrolling in a technical college. Technical colleges provide courses in specific subjects such as technology, engineering, agriculture, carpentry, cooking and secretarial skills. These schools teach skills that are geared towards a specific career, instead of a broad education. According to culinary teacher Ashley Kurth, 30% of her students are going into some form of hospitality or culinary education.

“Sometimes people feel that it is more beneficial to go to a technical school in order to build skills,” Kurth said. “You learn in a more controlled environment where it’s grade base instead of pay base. Along with that, you also get to learn the specific lingo in the actual field and get to practice using the machinery that is used on a daily basis.”

Some students leave school and enter the workforce through police or fire academies. However, applicants must be 21 years or older to pass competitive written exams in order to become a police officer.

“I plan on going into the police academy because I want to make a difference and help out the community. It’s something I have always wanted to do,” senior Colton Haab said.

Regardless of a student’s plan after high school, there are many different paths that a student can take. Whether the student wants to join the workforce, military, or take a gap year, sometimes attending college immediately after high school is not for everyone.