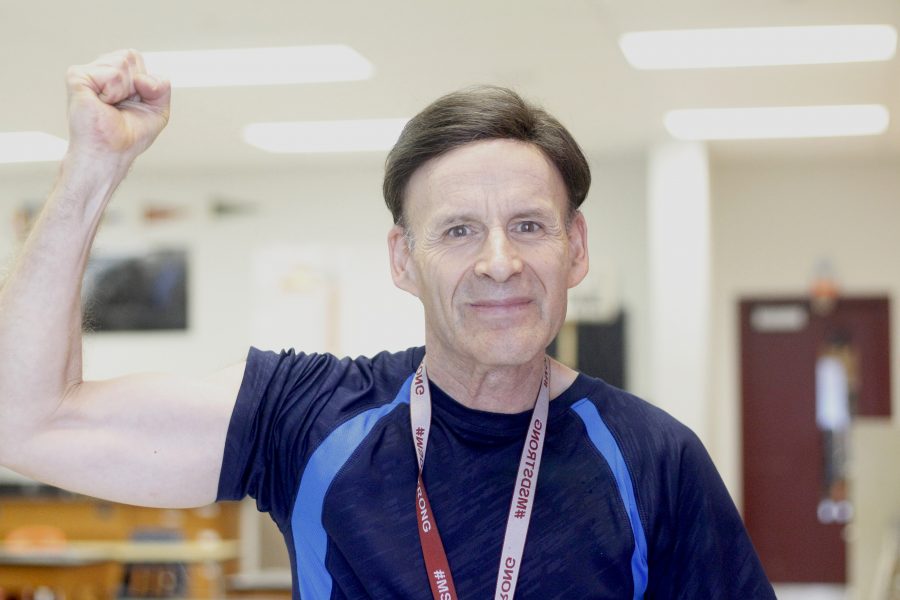 Guidance counselor Joan Paula poses for a photo in her office. Portrait by Jason Leavy

Guidance counselor Joan Paula has worked as at Marjory Stoneman Douglas High School for over 16 years, but the 2018-2019 school year will be her last year working at MSD.

Paula entered the Deferred Retirement Option Program (DROP) five years ago in 2015. The DROP program, once entered, provides an educator five years of paid work before they must retire.

Some of Paula’s favorite memories from MSD are when she is able to watch her “miracle” students grow and progress through hardships in both their individuality and education throughout her years with them.

“I have some students that I call my ‘miracle kids,’ in a sense, that have come a long way, I’ve seen the progress and I’ve enjoyed working with the same set of students from ninth to eleventh grade,” Paula said. “It was even a good feeling today to see some of the same students that I assisted from ninth grade now become seniors as they walked across the stage at the cord ceremony.”

When Paula retires, she plans on having a period of rest and relaxation immediately after her retirement. Following that, she would like to continue to have interactions with students, and look into becoming a college adviser. Story by Jason Leavy

Band director Alexander Kaminsky has taught for 30 years, four of which have been spent at Marjory Stoneman Douglas High School. He has decided to accept an offer as the director of band at the Vandercook College of Music in Chicago.

“My focus would be to train the next generation of band directors, which I feel at this point in my career, it’s time for me to give back to the profession,” Kaminsky said.

Kaminsky’s career as band director at MSD includes a number of achievements, including two 5A state championships back to back, and three concert bands and two jazz bands, who have achieved the highest ratings in the state.

Some of his favorite memories at MSD include the wind symphony’s midwest clinic performance and the moment concert band achieved the honor of straight superiors at the state music performance assessment.

“Another one [memory] was at the first of the 5A championships when they announced second place and it wasn’t us. We knew we won that 5A state championship for the first time,”  Kaminsky said.

In light of the world we live in, Kaminsky emphasizes the importance of finding a passion that helps conceal the negative. For Kaminsky, his passion is making music to the highest possible level of excellence and always doing his best. Story by Rishita Malakapalli

AP Psychology instructor Lisa Chauvin is retiring after teaching 35 years in Broward County, 27 of which have been at Marjory Stoneman Douglas. Chauvin graduated from Louisiana State University. Besides teaching, she participates in a number of school activities some of which have become fond memories for her.

“Favorite memories from Douglas are the various Pig Bowls, I chaperoned Grad Bash, and I used to drive the activity bus,” Chauvin said.

Chauvin’s enthusiasm for psychology is reflected in her lessons which many students remember being informative yet engaging. While there was plenty of note-taking, there were also many instances in which she would play movies or conduct an experiment to help explain a topic.

“AP Psychology taught me a lot about why humans behave the way we do, and I feel because of Ms. Chauvin’s unique teaching style, I will remember the topics we discussed for years to come,” senior Pinaki Upadhyay said.

Chauvin is retiring this year because her five years as a part of the DROP program have come to an end.

“I have had many, many thousands of wonderful students during my career and I am ready to have new adventures in life,” Chauvin said.

Chauvin’s long commitment to teaching, in addition to her passion for psychology and her participation in a number of school events has left a lasting impression on the MSD community. Story by Rishita Malakapalli

Sgt. John Navarra poses for a photo in the JROTC classroom. Portrait by Nadia Murillo

Sgt. John Navarra taught the JROTC program at Marjory Stoneman Douglas High School for over 12 years. Recently, Navarra announced that 2019 will be his last year teaching at the school. In 2015, Navarra entered a government program known as DROP, the Deferred Retirement Option Program. Once entered, an educator will be paid for five years before they are compelled to retire.

“Your retirement pay goes into an account that draws interest, but you continue to work and receive your regular pay,” Navarra said.

Navarra takes great pride in helping prepare his students for the real world.

“Teaching Junior ROTC is my favorite memory of all employment I’ve ever had,” Navarra said.  “I enjoy watching kids come in from eighth grade into ninth grade, where they barely know what high school is, yet in four years, they’ve matured and are ready to go to college.”

After he retires, Navarra plans on fixing, cleaning and doing chores around his house, along with scuba diving more regularly.

He also hopes to spend more time with his grandchildren. Story by Jason Leavy

Raymond Posada, sociology and world history teacher, has been teaching at Marjory Stoneman Douglas High School for the past four years alongside his wife and English teacher Katherine Posada, who has been teaching at MSD for the past three years. The family will be relocating to Raleigh, North Carolina at the end of the school year out of concern for their two children who they do not trust in the hands of Broward County Public Schools.

Raymond Posada wishes that students, administrators and teachers would hold students accountable for their actions. He feels that there is a lot that gets overlooked and brushed under the rug because no one wants to ruffle any feathers.

This year, both teachers introduced a co-curricular class referred to as “Englistory.” In these classes, Raymond and Katherine connect their lessons to create ties between what students learn in English and World History. The pieces of writing or literature that the students read in English may also be from the same time period as what they study in world history, or it may be written by a historical figure in which they learned about in world history.

“Mr. and Mrs. Posada have connected my education further than I would have ever expected. Going into the year, I expected the english-world history co-curriculum to be great, but it was far more than that,” said sophomore Zachary Beer. “The classes truly helped me understand the topics and the concept that everything is related. I will miss them very much, and as this was the first year of the ‘Englistory’ class, it saddens me to know that no one else will experience what I, along with my classmates, got the pleasure of learning through.”

Both Raymond and Katherine will miss many things from their time at MSD. In particular, Raymond will miss his iconic musical chair lesson, where instead of eliminating chairs and people, he only eliminates chairs, so in the end, they would have six or seven students sitting on one desk. All of the kids work together and have fun.

Both affirm that they are not leaving because of MSD or any people in particular, but rather, the environment in which the school exists. Raymond plans on teaching in Chapel Hill, North Carolina, while Katherine is applying for teaching jobs in the area as well. Story by Nadia Murillo

Guidance counselor Debra Work poses for a photo in her office. Portrait by Jason Leavy

Guidance Counselor Debra Work never fails to express her love for her job, yet asserts that she wants to retire happy. Work has had a career in education for 31 years and has decided to retire from Marjory Stoneman Douglas High School due to personal circumstances both in and out of school.

In addition to a successful professional life, she wants to enjoy her personal life and spend time with loved ones, including her mother.

“Life is too short. We shouldn’t take what we have for granted, and I want to enjoy my family, especially my mom who has been ill this year,” Work said. “It’s just another reminder that we need to appreciate, enjoy and treasure the time we have. I have an opportunity to really make a difference in my mother’s life.”

Work graduated from Coral Springs High School and went on to earn a degree in Health Education from the University of South Florida (USF). She then worked in the public health clinic at the health department of USF until she received a job at J.P. Taravella High School as a health teacher. Work also worked for a year at Miramar Elementary School as a guidance counselor. Work then obtained her job as a guidance counselor at Marjory Stoneman Douglas High School after Joan Bloom called Work and told her that they had a spot for her. One thing she always tells her students is to pursue a career that they love and will enjoy in the future.

“I’ve been fortunate in my career, I love what I did, do, and I’ve always loved working,” Work said.

After retiring, Work plans on moving herself and her mother in the hopes of finding help for her mother’s illness. She also plans on finding ways to help the community and have her dog complete its service dog training to help others, just like the service dogs at MSD.

Work hopes to enjoy the freedom of not being committed to coming into school every day, traveling and spending time with her mother and friends. Story by Nadia Murillo

Physics teacher Robert Rosen poses for a photo in his classroom. Portrait by Samantha Goldblum

Physics teacher Robert Rosen is retiring after 42 years of teaching. Rosen taught first at J.P. Taravella High School before he began teaching at Marjory Stoneman Douglas High School for 29 years. He has been here since the school opened in 1990.

“When you open a school, you get a chance to put your imprint on it and to this day, the school is known for its academic excellence because that was our vision,” Rosen said.

Rosen graduated from the University of Michigan with a degree in meteorology. His passion for science is something he enjoys sharing with his students. AP Physics C, a course available at only a handful of schools in the state, has been available since MSD’s inception, due to Rosen’s proficiency and experience with the subject matter.

Rosen frequently stays long after school to help end student’s confusions and review material. His dedication is reflected in his meticulously planned lectures and activities that help students grasp even the most complex concepts of physics.

“I really like how he teaches not for the exam, but just to learn physics,” said senior David Wu, “I feel like I am actually understanding physics.”

Rosen’s love for teaching is unwavering, but in accordance to the rules of the pension system, he is required to retire this year. He has expressed his desire to continue to be a part of the education community.

“I’d like to see what I can do next year, teaching somewhere, preferably here, as a volunteer. I’m still not really ready for not having a purpose for getting up in the morning,” Rosen said.

Famous among students and staff alike for his long standing commitment to the education of students at MSD, Rosen will be missed by many in the school community. Story by Rishita Malakapalli

They did not want to be interviewed by the Eagle Eye Newspaper.