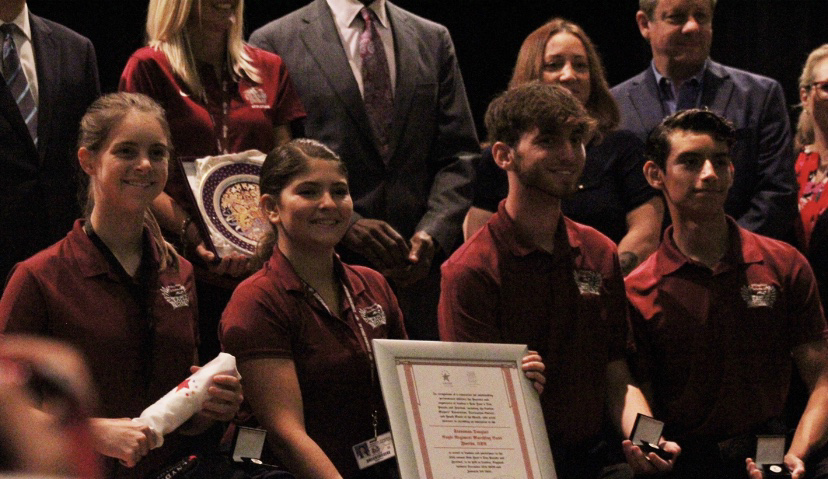 On Monday, Sept. 16, the Eagle Regiment was formally invited to perform in London’s New Year’s Eve Parade, and possibly the New Year’s Day Parade as well, in London, England for the year 2021. The marching band and color guard members entered the school excitedly as they awaited their special visitors. They had previously been informed of their invitation but were eager to meet the individuals who invited them. Although they were aware of the big news, this visitation marked the official press release surrounding the invitation.

“It was so cool to meet the people that thought highly enough of us to invite us to perform in their New Year’s Day Parade in a completely different country,” senior Jaedyn Wint said. “I was also so impressed that they traveled all the way here to invite us in person.”

Upon their arrival, Stephen Rivero, the first-year MSD Band Director, and his son Robert Rivero, the Associate Director of Bands, welcomed the visitors. He then passed the microphone off to Michelle Kefford who spoke about how proud she was of the band and color guard members.

“I’m so proud of this group of students. They are absolutely incredible and outstanding and it is my privilege to work with them every day,” Kefford said.

She then introduced Superintendent Robert Runcie. Runcie explained why he feels that music and the arts are so important in school and society.

Following these brief speeches, the Eagle Regiment performed for their visitors. After the performance, Bone expressed how impressed he was with the performance and then continued to inform the students about the event they had been invited to.

“Really, really good. You’re going to knock the socks off of everybody,” Bone said. “We are the greatest event in the greatest city in the world. When you come to London you’re going to perform in front of two-thirds of a million people.”

Bone continued to explain to the Eagle Regiment members that they will likely be the main attraction of the entire parade.

“[The parade-goers] come primarily to see you guys. The American high school and university marching bands are undoubtedly the most popular things we have in the parade because we don’t have anything like it,” Bone said. “You will be stars when you are in London.”

He also shared that the parade is broadcasted worldwide on television and was on 550 stations last year, reaching 455 million viewers. A video was then played for the students, showing them what the parade would essentially be like.

“It was unreal to see how many people were there and I can’t wait to perform in front of such a huge audience,” junior Jordan Winer said.

Bone concluded the gathering by reading a formal invitation to the eagles, which was graciously accepted. Lastly, he explained that he brings gifts to everyone he invites to perform in the parade and then gifted multiple members of the MSD community very thoughtful items, such as a hand-painted plate from the Buckingham Palace.