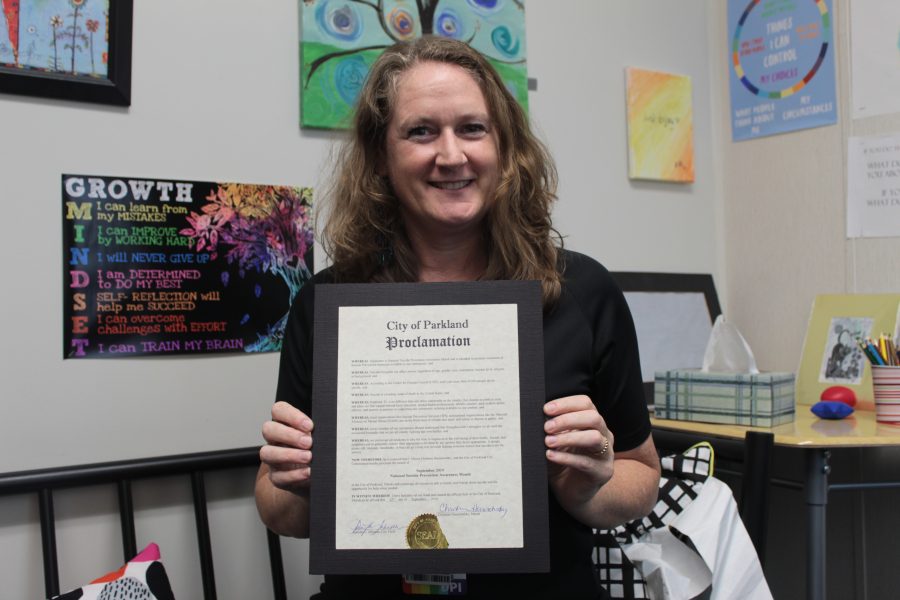 Although September is already known as National Suicide Prevention Month in the United States, the City of Parkland wanted to acknowledge that the city itself was making September the National Suicide Prevention Month. Suicide is a topic that a majority of people defer from talking about. Suicide is preventable but reaching out for help can be difficult for some people to do.

The new proclamation hopes to bring the conversation of suicide and prevention to light. The City of Parkland encourages all citizens to talk to family and friends about suicide and ask for help.

Suicide can affect anyone regardless of age, gender, background, or sexual orientation. According to the National Alliance on Mental Illness (NAMI) organization, suicidal thoughts are common and should be taken seriously. Recognizing the warning signs is the first step to know if someone needs to talk to a professional and obtain a diagnosis for future treatment.

A variety of suicide prevention outlets can be found at MSD and the Hope Club is one of them. In order to spread the awareness of mental health problems and relieve stress, the club engages in different types of activities and conversations.

“We discuss different things at different meetings and try to spread as much positivity around the school environment as we can,” Hope Club’s President Jada Henderson said. “Everyone comes together and we provide a safe and welcoming place to just talk and listen.”

In addition to open conversations, members of the club participate in yoga and perform numerous acts of kindness. During December last year, students placed sticky notes with positive messages around the school including in the bathrooms and hallways. The goal of the club was to spread kindness around MSD and make one’s day.

In the upcoming year, the Hope Club plans to do more for the students and staff. The club desires to start opening up service hour opportunities and is now currently seeking new members.

If you or someone you know needs helps now, you should immediately call the National Suicide Prevention Lifeline at 1-800-273-8255 or call 911.