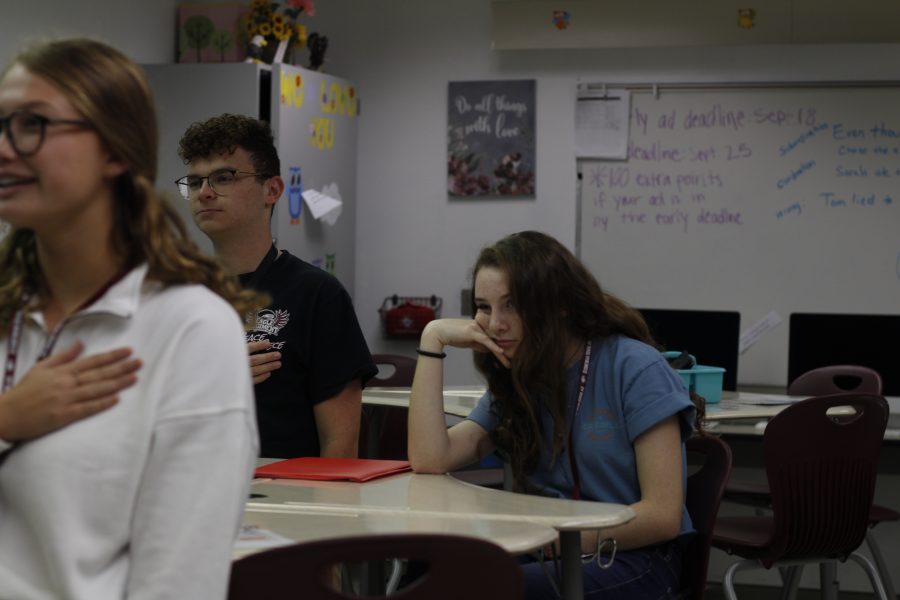 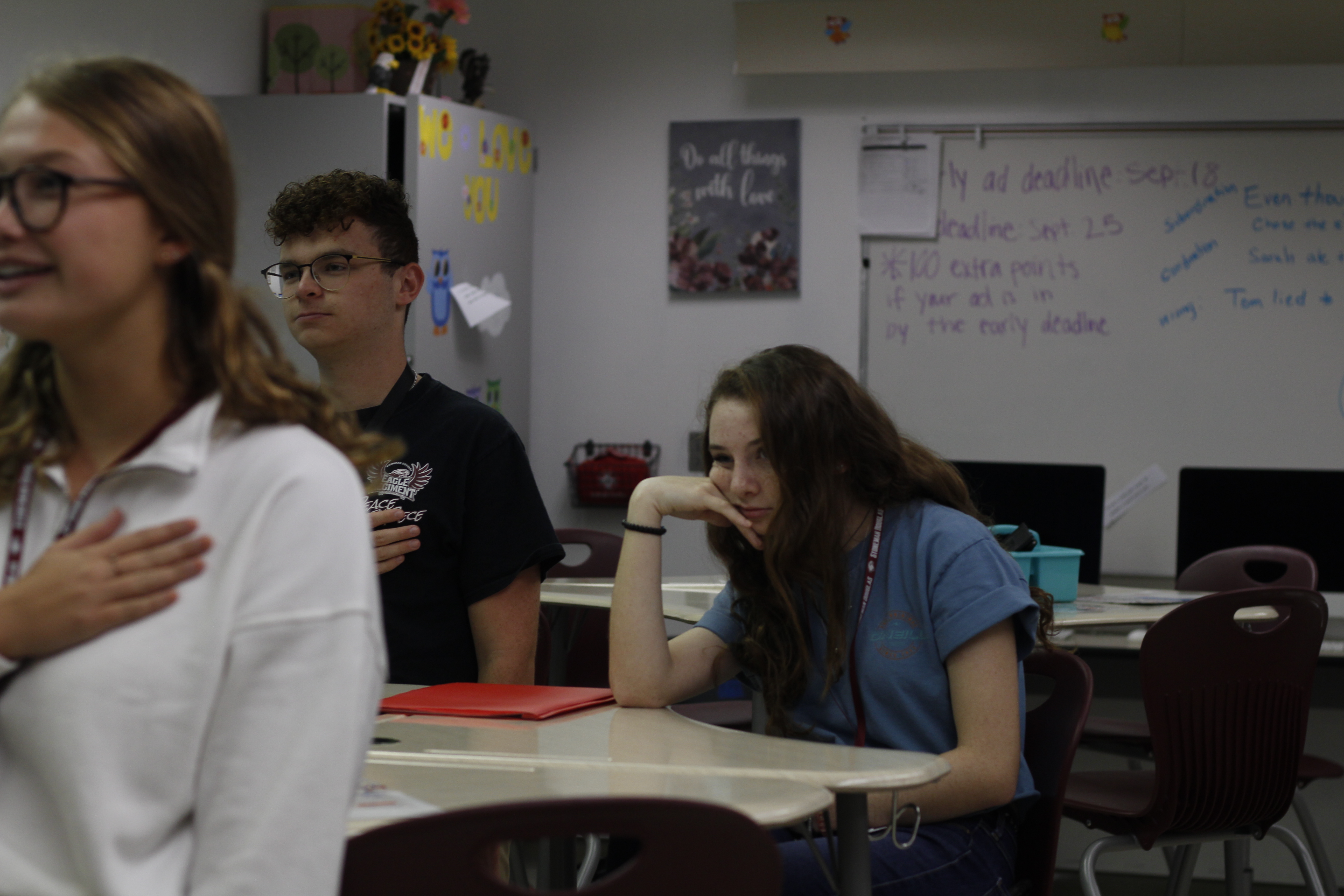 On Sept. 24, 2017, hundreds of NFL, NBA, and MLB players either sat or knelt in response to President Donald Trump requesting for owners to “fire” the players that protest the flag. Many players continue to protest today.

Although some paint Kaepernick as a hero, others see him as unpatriotic. His activism has spread to Marjory Stoneman Douglas High School. While some teachers are telling students to do what feels right to them when it comes to the flag, others will simply not tolerate the act of sitting.

Hospitality teacher Mitchell Albert expressed how he doesn’t believe sitting or standing for the flag is as black and white as it seems. In regards to Kaepernick, Albert believes that kneeling can be seen as a sign of respect, as well as an act of protest.

“He’s actually getting up and kneeling. So he’s doing something. He’s not saying, ‘I don’t feel like getting up or being lazy,’ he’s making a statement. I think that’s perfectly fine,” Albert said.

Others like math teacher, Kathryn Gilliam, see a different side to the issue. Gilliam is a strong believer in everyone standing for the pledge and, as a response to Kaepernick kneeling, she has not watched an NFL game since.

“Even if they don’t want to say [the pledge], they have to stand,” Gilliam said. “Being from a family of [Veterans] and knowing a lot of people that died in wars for our freedom, that I think out of respect, you should at least stand… when you’re standing for the flag, you’re doing it for the forefathers… It’s not about anybody putting down minorities or LGBT. It’s none of that. It’s just showing respect for our country.”

Technically, Kaepernick wasn’t breaking any laws according to U.S. statutes. The law states that “all other persons present should face the flag and stand at attention with their right hand over the heart.” The law specifically says “should,” but is not mandatory. While this is true, if others players continue with their protests they could be fined due to a recent announcement by the NFL regarding players protesting the flag.

Some students are more progressive than their teachers. More and more are feeling comfortable to sit in school during the pledge of allegiance. Regardless of whether or not their actions may lead to consequences, students are willing to take a stand by sitting.

“[Kaepernick] really set something off when he kneeled down. And for me, that was very inspirational,” junior Isabella Garcia said, “Our biggest problem right now is dealing with a huge amount of racism that’s going on in our country that’s been going since the beginning of this country. I’m a triple minority threat here. I’m hispanic, LGBTQ+ and a woman.”

Garcia expressed how she believes there’s so much more to protest in this country and that Americans can’t stop the progress that they’re making.

“I feel like it’s always good to understand both sides because I understand people’s points of saying that ‘when you don’t stand up for the flag you’re disrespecting people,’” Garcia said.

Garcia wishes it would be more of a discussion than an argument or both sides will get nowhere in the long run.

The conversation continues to affect standards among sports and shape the way players are allowed to express themselves. It even affects the way high school athletes think when it comes to the flag.

“We had another team [kneel for the flag]. It’s just seen as disrespectful in our coaches’ eyes” junior Nick Rilling said. “And I don’t know if they understand the whole reason for it, but I definitely wouldn’t do it.”

Rilling also expressed that he believes the coaches would definitely be disappointed and upset with the players if they were to sit or kneel, but didn’t know if they would go as far as giving an official punishment to the players.

The debate continues to be a prominent topic not only in sports, but all around America and controversy is still attached to the conversation.

According to Broward’s student handbook under section VI (six), the Student Free Speech and Distribution of Materials section, on page 41, it states: “The pledge of allegiance to the flag shall be recited at the beginning of the day in each public elementary, middle and high school in the state. Each student has the right not to participate in reciting the pledge. Upon written request by his or her parent, the student must be excused from reciting the pledge, including standing and placing the right hand over his or her heart.”

Broward county policy does mandate all students to say the pledge of allegiance every morning at school. The only way for a student to legally sit for the pledge is for that student to get a written excuse from their legal guardian.

The West Virginia State Board of Education v. Barnette Case, (1943), in the United States Supreme Court ruled that“the Free Speech clause of the First Amendment prohibits public schools from forcing students to salute the American flag and say the Pledge of Allegiance.”

While Broward County Schools imposing that rule about standing for and saying the pledge actually goes against the student’s constitutional rights, it does not against Florida state rights.

In only 32 states it is clearly written that public school students are allowed to refrain from standing and reciting the pledge. Florida and Texas are the only states that say you must have a written excuse from a parent or guardian to be allowed to not participate in the pledge. The other states either are unclear about it or require students to do so.

However, the supremacy clause (article 4, section 2 of the constitution), states that federal law, supreme court decisions, and US treaties (anything decided on a national level) supersedes anything decided on a state or local level. The point is to make sure that states do not go against the national interests.

If students feel pressured to participate in ideas against their will they can inform either their teacher or administration that it goes against their constitutionally protected rights.