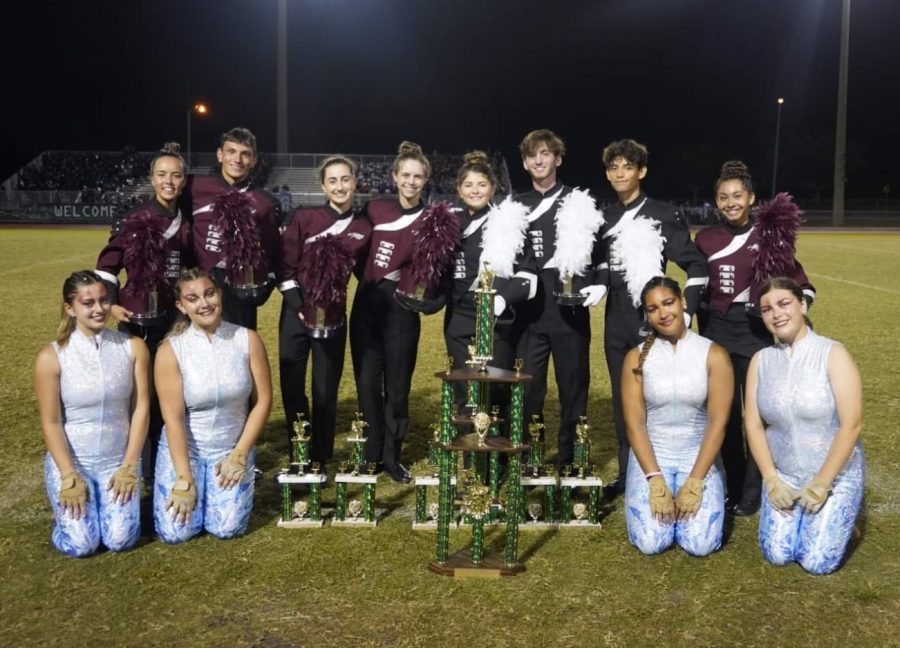 With a strong reputation, a lengthy background of accolades and a brand new director, the Eagle Regiment marching band is no stranger to victory. Recently, they participated in their first event of the season and took home all six trophies.

On Saturday, Oct. 5, the Eagle Regiment Marching Band won the 17th annual Falcon Sound Invitational marching band competition at Charles W. Flanagan High School. Not only did they have the best overall score, 79.200 out of 100, but they also won top awards for General Effect, Visual, Music, Best Color Guard and Best Percussion.

“It was really fun, because we actually had to try really hard, and it was worth it in the end,” freshman Nick Colella said.

At last year’s Falcon Sound Invitational, the band received a score of 80.90, ending up just 0.05 points shy of first place, which was awarded to Park Vista High School from Lake Worth.

After four years with director Alex Kaminsky, who moved on to VanderCook College of Music, the band is undergoing its first year with director Steve Rivero, who was previously the band director at Flanagan High School.

“I think it went great. I think [the band] did exactly what we wanted them to do and they did really well,” director Steve Rivero said. “We had, for the first time, our closer completed on the field, and they’ve never had a closer for their first show.”

Rivero’s new direction has surely changed the program, but it still retains its foundation.

“I think we’ve created a solid family environment, and we’re still doing that,” Rivero said. “We’ve changed practice hours, so they no longer are here until 10:30 at night, as they were in the past, and we’re trying to implement our number one rule of being in the Eagle Regiment, and that’s to have fun.”

“I would give him basically 99.9 percent of the credit. He’s pushed us around a lot, and he’s given us a lot of motivation through his new ways. It’s been kind of hard since we’re still getting used to him, but at this point we’re now beginning to understand each other,” Navarrete said.

Rivero has high expectations for the rest of the marching season and hopes that the band will continue to improve throughout their time together.

“I hope that we will be better than we were the day before,” Rivero said. “I would like to finish this marching season real strong and continue to provide new experiences for these students that they haven’t been around yet.”

The Eagle Regiment has its next competition at Bands of America Orlando at the Camping World Stadium on Saturday, Oct. 12.