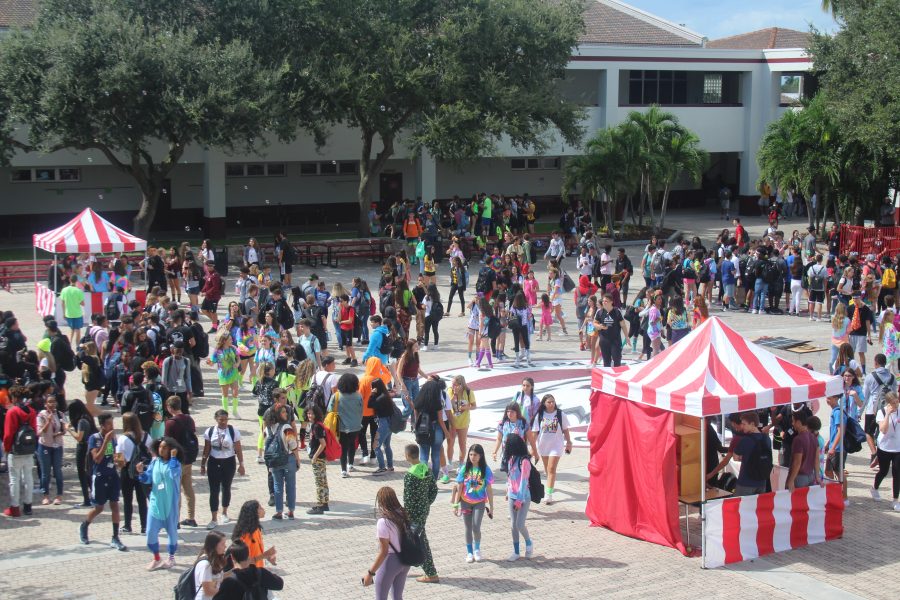 The carnival occurred after school in the MSD main courtyard. Photo by Joyce Han

On Thursday, Oct. 10,  the Homecoming Carnival took place after school in the Marjory Stoneman Douglas High School main courtyard. MSD’s Student Government Association organized the event in order to get the student body excited for homecoming week and to celebrate the end of homecoming spirit week.

“It was definitely high energy, but it was really exciting to play the carnival games and have fun with my friends,” said senior Amanda Brotton, a student who visited the carnival.

The Homecoming Carnival took weeks to plan and organize. SGA came up with ideas for activities, and they also contacted outside companies to bring in entertainment, such as the petting zoo and cotton candy machine.

“It was very hectic when we were trying to organize an event this big, but it was a great experience and awesome to be able to take part in,” senior Sam Hendler said.

SGA is also in charge of Spirit Week, which includes planning creative dress up themes for the student body to participate in, which helped create the week-long celebration for the days leading up to Homecoming.

“SGA is a key part in putting together homecoming activities, and we wanted to plan this carnival to boost student morale and really get everyone excited for Homecoming with a fun carnival,” Hendler said.

The carnival was cut slightly short, as a sudden rainstorm passed over the open courtyard.

“The rain definitely came out of nowhere, it was crazy,” senior O’kayhvia Ferguson said. “But I still was able to check out all the activities, and I had a great time.”

Despite the bad weather, the hard work of SGA was still realized, as many of students took part in the multiple activities and entertainment.

“I can’t believe that SGA pulled off such a crazy event with so much to do,” senior Angelina Brier said. “ I’m glad I got to take part in it, and have some cotton candy of course.”

Homecoming festivities at MSD concluded with a pep rally on Friday, Oct. 11, which was then followed by the Homecoming game at 7 p.m. against West Broward High School, which ended in a 36-0 win for the MSD Varsity Football team.