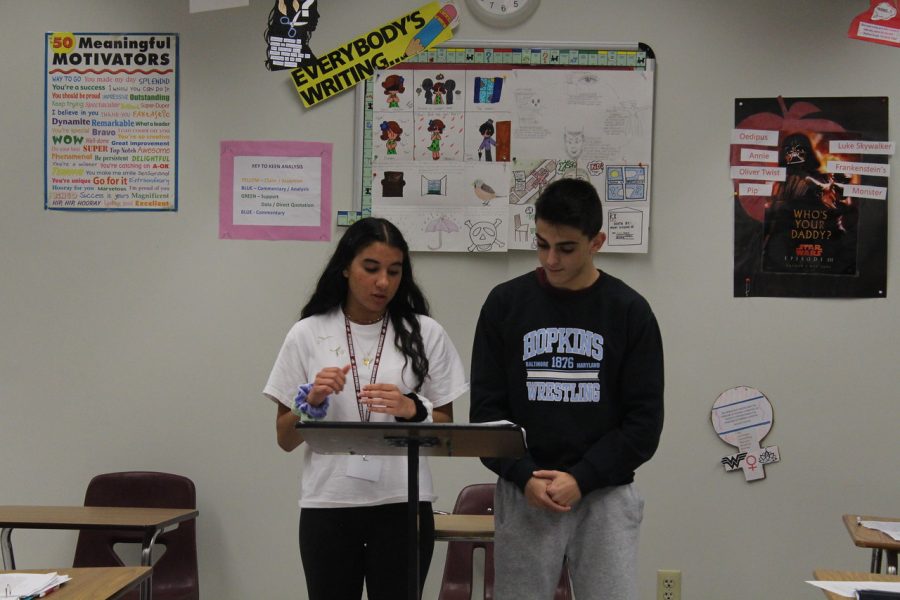 Based on the short story entitled “The Scarlet Ibis” by James Hurst, a young boy named Doodle born with a disability that prevents him from doing normal kid activities, he overcomes many challenges alongside his stubborn older brother. Doodle’s brother then abandons him during a walk near the woods and Doodle faces death. Therefore, English teacher, Michelle Daon held mock trials arguing whether or not the older brother was responsible for Doodle’s death.

The classes were split into two groups. One of the groups was for prosecution which they are against Doodle for committing the crime and the other was defending Doodle’s brother for not being responsible for his brother’s death. Three selected students were given specific tasks which included a timekeeper to guarantee the time was abided, the court bailiff to keep order in the court, and an administrator to ensure procedures were followed.

“At first I wanted to be on the defensive side, but after being on the prosecution side I learned a lot more about the story and the characters, we all bonded really well and it was a fun experience to argue on each side,” Senior Marley Berrick said.

Daon requested for teachers and administrators to participate and to be juries and decide on a verdict. During fifth period, assistant principals, Daniel Most and Daniel Lechtman came to observe. Lechtman shared his experience with the law and went over points between both sides and came to a conclusion. In seventh period, Algebra 2 teacher Donna Numeroff and English teacher Madlyn Wank were juries. Then in eighth period, AP U.S. History teacher Lisa Hitchcock and Astronomy teacher Brandon Jeter arrived.

“It was really nice having different administrators and teachers coming to our class and sharing their insight with us. Although we were the losing team, this experience helped me a lot and taught me with public speaking and essential skills,” Senior Brian Smith said.

All students were required to participate and were given three minutes each to speak. As each group spoke, they each provided facts and evidence-based on what they read in the story. The winning team would earn ten extra credit points and those who do not participate would get points taken off.

“I was a little nervous at first when I spoke in front of the class, but over time the excitement of arguing encouraged me to defend my side. It was a very interesting activity and I would like to do it again,” Senior Stanley Desir said.