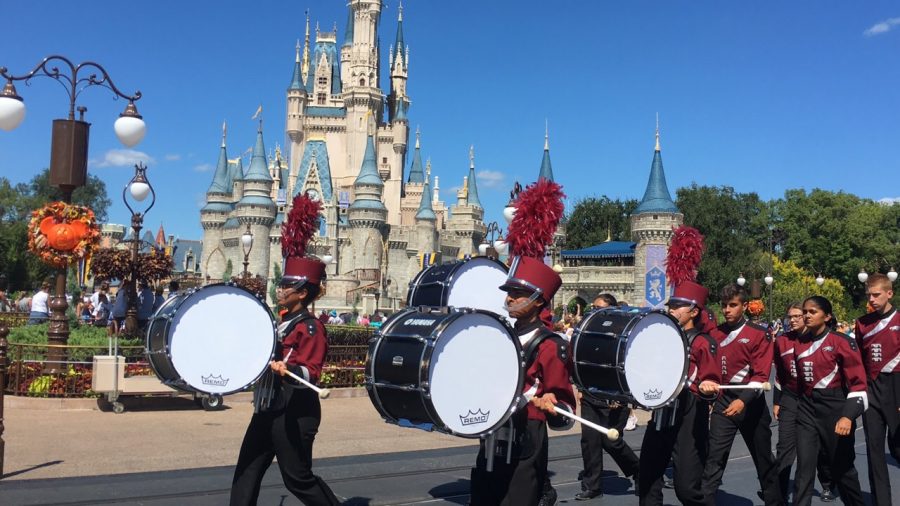 On Saturday, Oct. 12th, Marjory Stoneman Douglas High School’s Eagle Regiment marching band drove up to Orlando, Florida to begin a three day trip where they competed in a mandatory marching band competition, marched in the Disney Festival of Fantasy Parade and had a free day in Disney World.

The Eagle Regiment competed in the Bands of America regional championship on Saturday, where they faced bands from many states including Oklahoma, South Carolina and Indiana.

Bands of America, commonly shortened to BOA, is a marching band competition where high school marching bands across the country compete to win the title of best band in the nation. They offer both regional competitions and grand nationals where bands are evaluated on their music performance, visual performance and general effect.

The members of the Eagle Regiment have been preparing for this competition since the beginning of the summer. From June 10 to June 13, the band members began working hard on their choreography, music and drill at the camp. An additional two-week camp prior to the start of the new school year gave the students another opportunity to practice.

The championship, which took place at the Camping World Stadium, housed 32 bands who competed in the preliminary competition. However, only 10 lucky bands were able to advance to the final round which was later on in the evening.

Sunday, Eagle Regiment prepared for another performance, this time at Disney World where they would be marching in the Disney’s Festival of Fantasy Parade.

The parade is a daily event in Magic Kingdom, one of the four Disney theme parks. It starts by going down Main Street U.S.A, then winds through Liberty Square and ends in Frontierland. Throughout the parade there are lots of floats with many classic characters.

The Eagle Regiment was able to march in the parade and go backstage, while still having time to take advantage of all the amusements Magic Kingdom had to offer.

For the final day, the Eagle Regiment members were able to have a free day to explore Hollywood Studios and enjoy time with friends.

After having a full weekend of competing, marching and enjoying both Magic Kingdom and Hollywood Studios, Eagle Regiment made their way home late Monday night with multiple awards to represent their win at BOA.