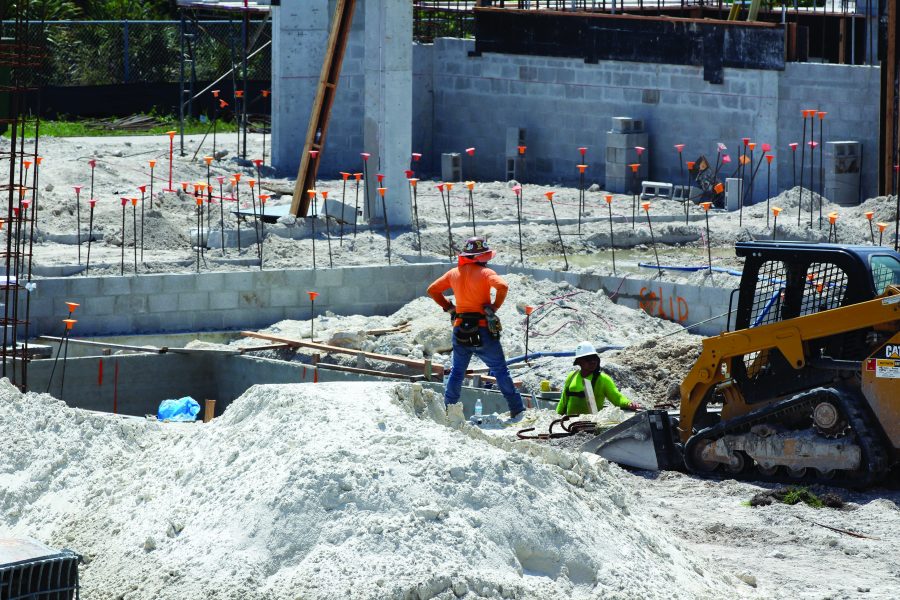 Building New Stories. Portal Construction Inc. started construction on the new building at MSD on Aug. 1, 2019. This will be the 1500 building, located between the 400 building and the 900 building. It is expected to be done by July 1, 2020. Photo by Darian Williams

Building New Stories. Portal Construction Inc. started construction on the new building at MSD on Aug. 1, 2019. This will be the 1500 building, located between the 400 building and the 900 building. It is expected to be done by July 1, 2020. Photo by Darian Williams

On Thursday, Aug. 1, 2019, construction of a new building started at Marjory Stoneman Douglas High School. It is designed to be two stories, 45,000 square feet with 30 educational spaces, which include science labs and regular classrooms.

There will be a patio on the ground floor between the new building and the 400 building. All of the rooms in the building will be equipped with new computers and laptop carts, something most current classrooms do not have. According to the official blueprints given to Principal Michelle Kefford, the new building has been numbered as 1500 by the state of Florida.

The building is expected to be finished by July 1, 2020, and once completed, the portables in Eagle Manor will be removed. Teachers in the portables have not been told which teachers will be in the new building or where they will move to once Eagle Manor is removed. Administration has not made those decisions yet.

“We will look at who wants to go into the new building,” Kefford said. “We’ll organize it probably in a way where departments are together.”

Numerous concerns were brought up throughout the planning process, including the loud construction noises which can trigger students with PTSD. The construction company and administration hold monthly meetings to talk about any concerns and discuss updates on the progress of the building.

“We talk to [the construction company] about certain dates and times that we want to avoid very loud construction,” Kefford said. “There is a lot of consideration and concern paid to ensure there is a strong separation between the construction area and any interaction with our students and staff.”

The plan for the new building started months before the actual construction of it. It had to go through a process known as a request for quotation (RFQ). The administrators at MSD held a meeting on July 16, 2019, to discuss details about the construction.

“RFQ is a bid progress,” Assistant Principal Jay Milmed said. “[the school] submits all of their bid proposals downtown and a committee selects.”

Students are already upset by the noise of the construction. However, no noise complaints have been formally made to administration.

“It’s frustrating that they work on it during school hours because the noise can be very distracting and concerning at times,” junior Arianne Mckiernan said.

“As the building is going on, I hope I’ll get used to [the sounds],” AP World History teacher Diane Wolk-Rogers said. “Although, I think there is certain [sounds] that they can do a better job of eliminating.”

The new building is still a work in progress and will be until the summer. As the building comes closer to the end of construction, more details will be discussed between administrators and staff.