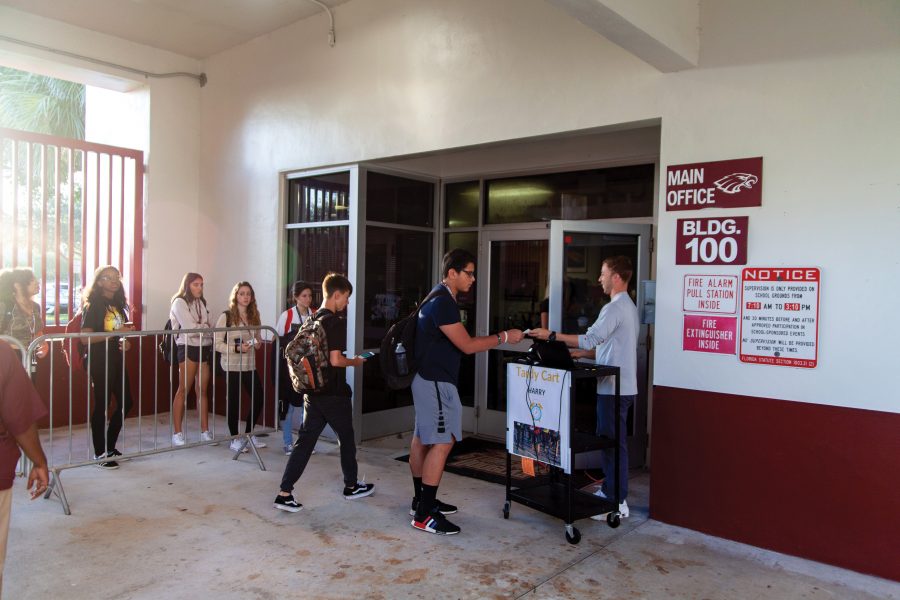 Fashionably Late. Students come late to school and have to line up to get tardy passes before heading to class in the morning. The new tardy policy requires students to get a pass to class, if they are not in class by 7:40 a.m. Photo by Darian Williams

Fashionably Late. Students come late to school and have to line up to get tardy passes before heading to class in the morning. The new tardy policy requires students to get a pass to class, if they are not in class by 7:40 a.m. Photo by Darian Williams

For the 2019-2020 school year, Marjory Stoneman Douglas High School implemented a new tardy policy to limit the chaos of late-comers in the morning.

In the morning when students come in before 8 a.m., they get a tardy pass at the front office and then are sent to class. After 8 a.m., administration checks if a parent has called in for any of the tardy students and then will change the tardy from unexcused to excused. The students whose parents do not call in remain with an unexcused tardy in Pinnacle.

“It’s pretty much to help control the tardies and the flow, so that the teachers know when they get to the classroom that they did stop at the gate and that security has seen that they have their ID,” Student Services Secretary Debra Wanamaker said.

“We’re just trying to have more kids come to school on time because it upsets the learning environment and distracts teachers and kids,” Social Studies Academic Coach Jeffrey Wasserman said. “We just want to make sure that the kids are getting the education they deserve.”

Administration has three tardy carts for the three entrances onto campus, which are named after Harry Potter characters per math coach and behavioral specialist Anna Koltunova’s request. The carts print out a pass with the student’s name and picture, and then the student goes straight to class.

“The new tardy policy helps me get to class quicker if I’m running late because I can just grab a pass and go to class instead of waiting in annoying long lines to get passes printed in student affairs,” junior Capri Lica said.

Mondays and Fridays are the days most tardies are issued, likely as a result of the nearing weekend. Tuesdays, Wednesdays and Thursdays have a lower amount of tardies issued. While Mondays can have around 100 tardies each, days in the middle of the week can have as low as 25. According to the MSD administration, the average number of tardies is typically between 25 and 40 a day.

“I’m a big fan of it [the new policy] because I’m helping lead it,” Wasserman said. “I think we’re seeing results. Sometimes you see kids running [towards their classrooms] because they  understand that they got to go to class.”

Under the new policy, administration handles the discipline for students who are tardy during first period and fifth period, eliminating the need for teachers to issue detentions and further consequences during those two periods, which also happen to be the periods with the most tardies. Teachers issue consequences for students who are tardy during the other six periods, writing detentions and referrals as needed.

Most teachers support the new policy. Per the teacher contract, the faculty at each school can implement a proactive behavior plan. Tardy policies fall under that plan. However, teachers originally voted on a stricter policy that did not allow for warnings before the first tardy would be issued. The current policy was presented to the staff by Principal Michelle Kefford as an alternative, which the staff approved through an official vote in August.

The new tardy policy has been making the mornings smoother for office staff and students alike.