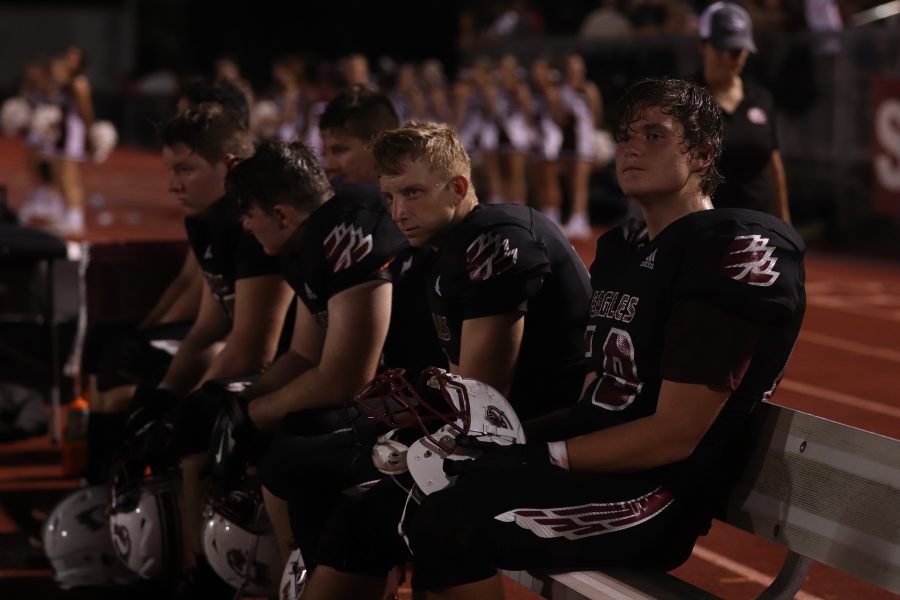 Look of Defeat. MSD players relish their last home game of the regular season while processing their first loss of the year.

Wide receiver Ajay Sasser (5) and tackle Justin Jaillet (68) relish their last home game of the regular season while processing their first loss of the season. Photo by Jenna Harris

Following 8 straight wins, the MSD Eagles faced the Plantation High Colonels in a high stakes match up, to end the 2019 regular football season.

The undefeated Eagles were the underdog against one-loss Plantation and with the exception of a first quarter touchdown, MSD was out matched.

Plantation would go on to expose MSD’s lack of speed at the key positions and score long touchdowns, one after another.

After five straight scores, Plantation had essentially put away MSD in the next three quarters, with a final score of 39-10.

“This game was disappointing as we definitely had hopes of an undefeated season since we were so close to it. But, we have to refocus for the playoffs and try to go out there and get a win next week,” linebacker Ari Fooksman (58) said.

MSD has now concluded their regular season with a record of 8-1, a vast improvement from last season’s 5-5 record and will head to the playoffs.

The MSD varsity football team will look to gear up next Friday, Nov. 8 at home against Miami High at 7:30 p.m. for the first round of the playoffs.