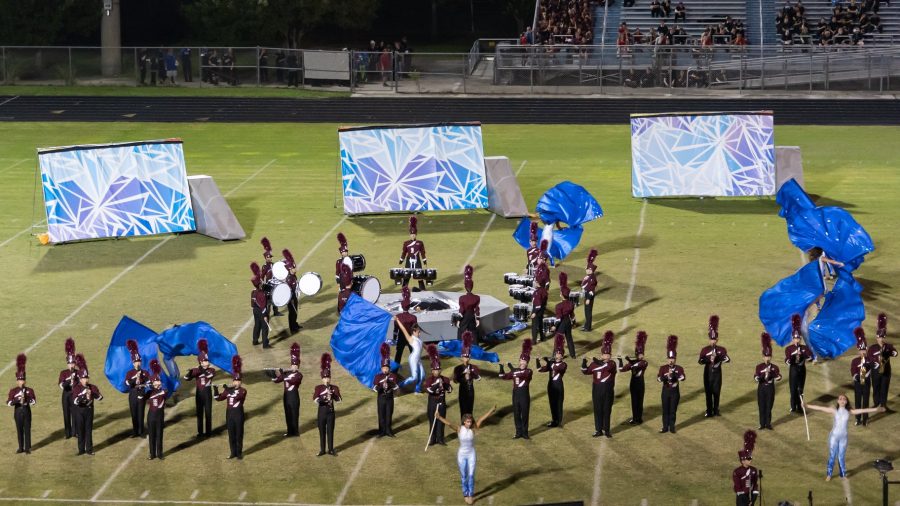 Everyone knows the good times can’t last forever, and the same applies to the Eagle Regiment. After a great season — first place overall at Falcon Sound, fifth place at BOA Orlando and superior ratings at a Music Performance Assessment — the band received its first major letdown.

On Saturday, Nov. 2, the Eagle Regiment marching band performed their show “A Winter’s End” at the 2019 Striking Cobra Invitational at Park Vista High School in Lake Worth. The band was awarded a score of 90.75, just 0.55 points away from first place, which was won by West Broward High School.

“The overall performance was pretty good, especially individually; everyone held their responsibilities really well,” sophomore Payton Yaffe said. “Overall it was one of our best runs of the whole season.”

The band also had some areas that they thought were not in top shape.

“I think musically, it was a really strong performance, but I think we could’ve done better in some areas visually,” senior Lauren Garnecki said.

During their performance on the field, the band experienced technical difficulties with their electronics, namely the generator. Due to this, the band’s overall performance did not go according to plan.

“The generator stopped working in the beginning, so the fire didn’t go up. The soloists’ microphones were not set-up properly, so we couldn’t hear one of the soloists,” Yaffe said.

“I think we are going to keep going, and hopefully the enhancements that we’ve done will pay off. We’re going to review video of the show, we’re going to analyze what we’ve improved,” Rivero said.

Many band students are surprised with how well the season is going under the new direction.

“I think it’s actually really good. I like Mr. Rivero a lot, and I like everything that he’s done,” freshman Emma Ortiz said.

The band is preparing for their last performance of the season, and the biggest one to date. With the Florida Marching Band Championships looming, the band is hoping for its third consecutive first place in class 5A.

“My hope is were able to win and to get a three-peat and win again after the past 2 years,” Garnecki said. “We’ve had a solid season so far, so I think it’s pretty possible that we can.”

Some band members are ready to take on one of their biggest challenges this season.

“I have really high expectations. I think we could win, in a lot of [categories] as well, and I think we can win overall,” Yaffe said.

The Eagle Regiment’s last performance of the season will be at the FMBC State Championships, on Saturday, Nov. 23 at Daytona Stadium in Daytona Beach.