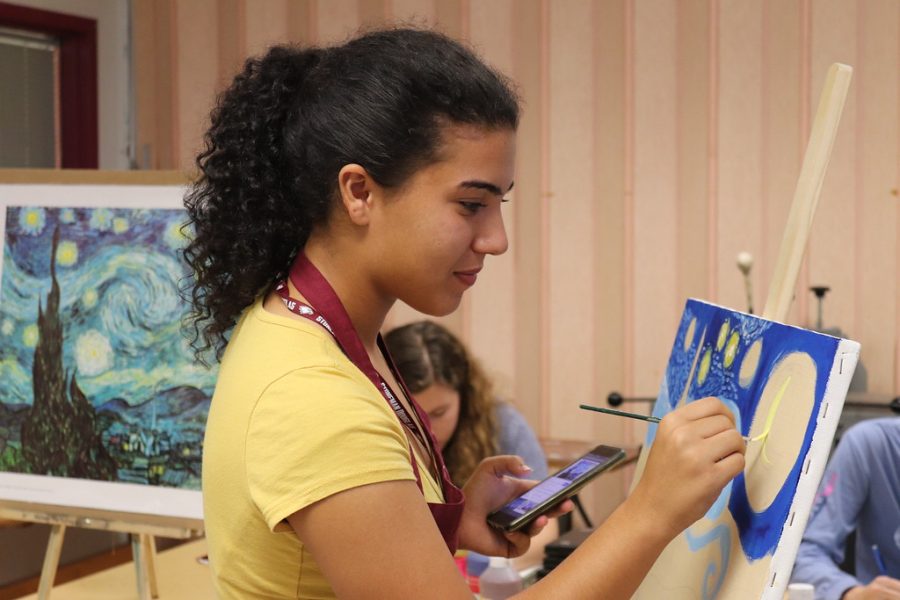 Senior Krystina Masihy works on a collaborative project between French club and Art on Tuesday Nov. 5. Photo by Kelly Cooke

Senior Krystina Masihy works on a collaborative project between French club and Art on Tuesday, Nov. 5. Photo by Kelly Cooke

The French Club, along with their sponsor, French teacher Geemps St. Julien, hosted French Week this year. The activities included several activities each day from Monday, Nov. 4, to Friday, Nov. 8. The focus of French Week is to integrate French culture into the daily school lives of students and staff at Marjory Stoneman Douglas High School.

Each morning, a member of the French Club was featured on the announcements, saying a fact about the culture, a word in French and its translation and singing a segment of a French song. The purpose of this was to encourage the use of the language and educate MSD students.

Students involved in the French Honor Society took part in the event as well. The French Club Vice President, Sebastian Osorio, and FHS board member, Moises Cobo, both expressed their passion for French Week and its importance.

“This week is meant to bring a little bit more awareness to the French class and the culture of the country,” Osario said.

Some of the activities comprise a breakfast, including French delicacies before school in the Teacher’s Lounge on Monday, sports and games of French origin on Tuesday and French music and dancing in class on Thursday. St. Julien intends to incorporate these activities into his curriculum.

St. Julien explained that French Week is a national event created by the American Association of Teachers of French. This tradition has been occurring for 21 years in schools and communities who choose to participate. St. Julien portrays the significance of French Week around the nation, as well as to him.

“Learning motivates French Week. We want to educate our students and provide them with a richer knowledge of France,” St Julien said.

French Week is an event meant to symbolize the culture and traditions of the French. MSD continues to encourage students to take part in multicultural activities and become more informed about various cultures.