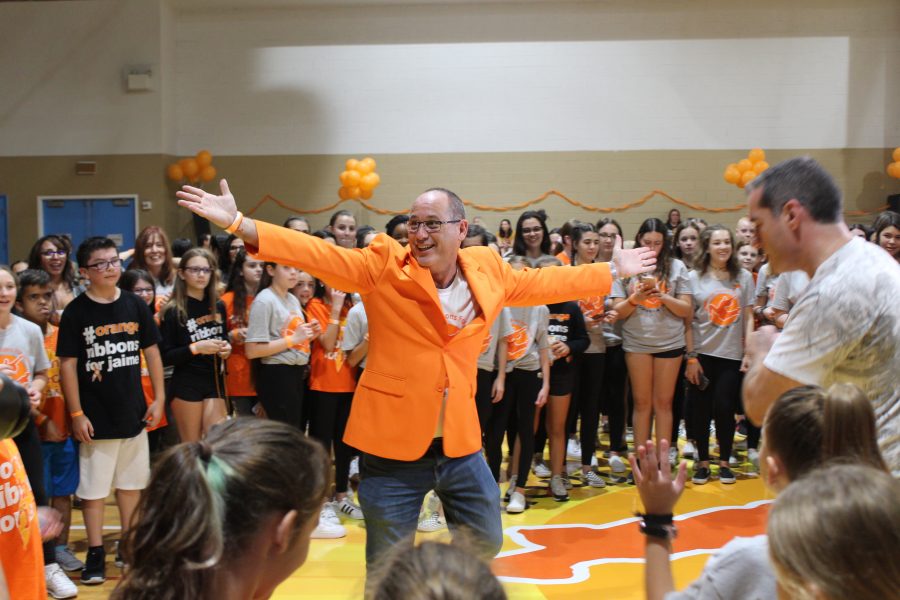 On Friday, Nov. 8 the non-profit organization Orange Ribbons for Jaime organized its first annual Dance-a-Thon in Parkland. The event was held at the Pine Trails Recreation Center, where Jaime spent the majority of her time.

The nationwide Dance-A-Thon’s main focus was to raise money for college scholarships in Jaime’s name while doing what she loved most, dancing. The applicants for these scholarships may be of any background or ability who are looking towards a post-high school education in dance or aiding others and the community.

“I was friends with Jaime, and this is a great way to honor her life and do things she enjoyed like dancing to help others,” junior Katelyn Taylor said.

Locations all around the nation participated in the three-hour dance party throughout Veterans Day weekend. All locations have a chance to meet with renowned choreographer Marinda Davis or actress and dancer Jeanine Mason as a prize for fundraising.

The Parkland event began with a few words from The Mayor of Parkland Christine Hunschofsky. She announced that Nov. 8 will officially be named Orange Ribbons for Jaime Day in Parkland, where others will be encouraged to participate in charitable acts.

Throughout the event, performances by DCC, DTX, and the Florida Panthers Dancers entertained the audience of dancers and supporters. Local restaurants and stores provided decorations, snacks, pizza and beverages for the event such as Party City, Publix, Pizza Time Caffe, Pepperoni Grille and Anthoney’s Coal Fired Pizza.

Merchandise was given out to dancers all through the event as prizes for “Best Dressed,” “Most Enthusiastic” and “Most Orange.” Children and adults alike participated in the festivities.

“The goal of the event is to bring people together, raise awareness of what their cause is for and also raise money for scholarships in her [Jaime’s] name,” volunteer and MSD DECA adviser Mitchell Albert said. “I have quite a few students attending as well and some of them told me that they’ve raised $400, $500 and even $1,000 for these scholarships.”