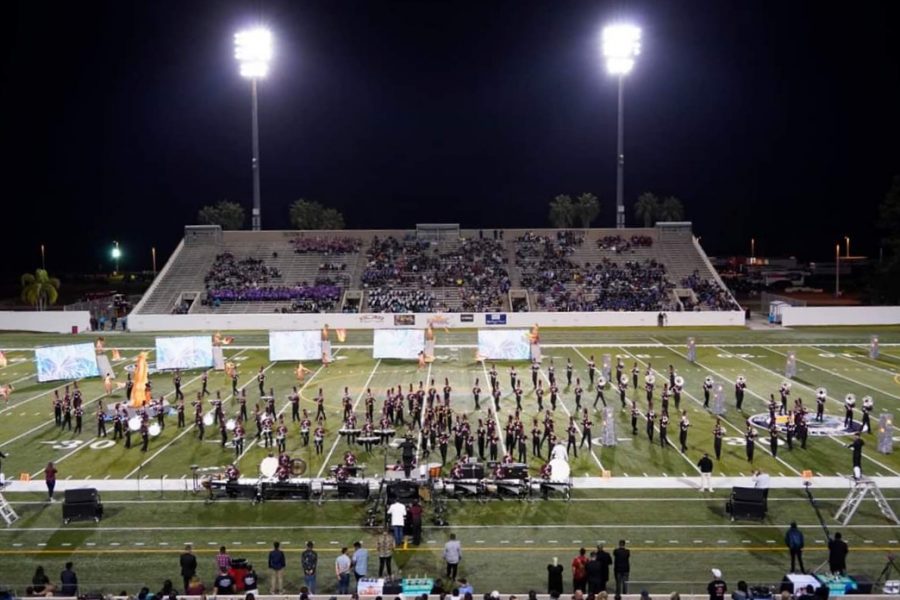 After their first season with a new director and staff, as well as a two-year winning streak, Marjory Stoneman Douglas High School’s Eagle Regiment came in second place at the 2019 Florida Marching Band Championships at Daytona Stadium in Daytona Beach, Florida. The band faced this letdown after winning in 2017 and 2018 under the direction of former director Alexander Kaminsky. West Broward High School won first place after staying in close competition with the Eagle Regiment throughout the season.

Although they did not come back with the winning title, the Eagle Regiment band members hold their heads high, feeling proud of both their FMBC performance and overall season.

“I think the band performed the best that they have ever done,” senior Jameson Cohen said. “In that final moment, I believe we all just stepped up and put on the best product that we possibly could, and West Broward was tough, so we came up a little short.”

The band received the Music and General Effect awards during the semi-finals held at Oveido High School and tied for the Music award with West Broward during finals. The band’s finals score was 91.100, 1.15 points less than West Broward’s 92.250.

“It was our peak. It made me proud and we did everything correctly,” junior Jordan Wolfe said. “This was definitely a transition season, and we transitioned very well.”

Director of Bands Steve Rivero was very pleased with the finale of his first season with the Eagle Regiment.

“It was wonderful, [I’m] really happy about it,” Rivero said. “Great season, great chemistry developed between the staff and the students, nice building blocks for the future. I know the students wanted to get first place, but you can’t get first place all the time. They don’t need to wear a patch with first place on their arm to have honor.”

Members of the Eagle Regiment were welcomed back to school with posters and signs from members of the community, including Parkland’s Mayor Christine Hunschofsky.

The band staff is already beginning to prepare for their 2020-2021 season. After being hired late within the development process for the 2019 season, new staff members, including Rivero, are looking forward to being present for all stages of production during the coming months.

“We’re looking forward to being here to have a design meeting in December for next year’s marching season and doing everything the right way, versus last year [when] we got here late and kind of picked up the pieces,” Rivero said.

With the Eagle Regiment’s 2019 season now over, their focus is placed on smaller groups within the band, such as the concert and jazz bands. The indoor percussion and winter guard programs will also be ramping up their individual seasons within the next month.

The band will perform samples of holiday music at the Coral Springs Holiday Parade on Wednesday, Dec. 11, and hold their annual Winter Concert on Thursday, Dec. 12 in the John Rusnak Performing Arts Building.