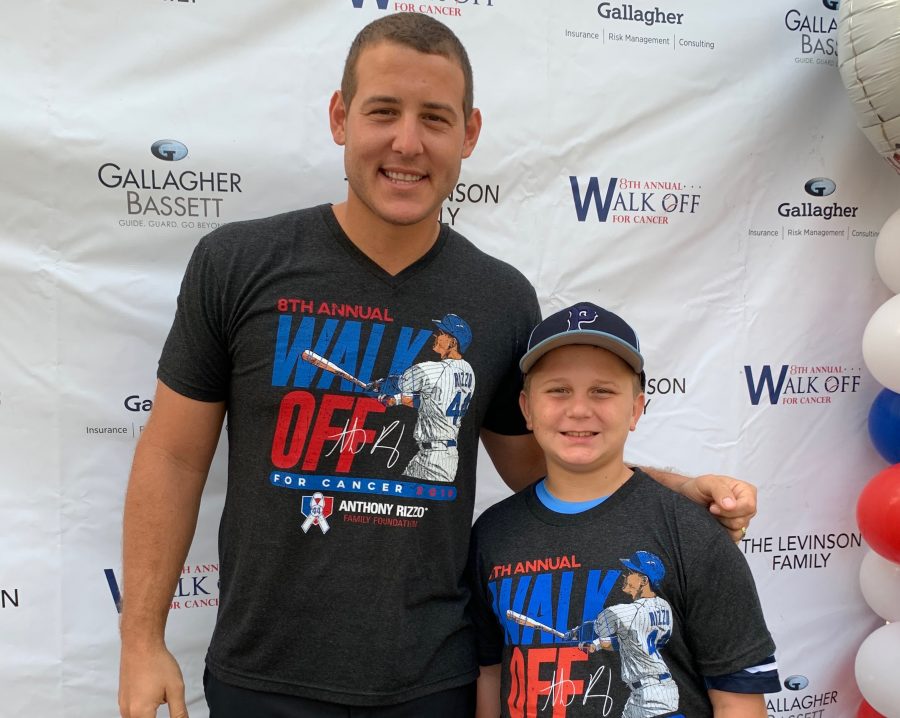 Anthony Rizzo meeting Parkland Poker player and fan Vince Squiccirini at the entrance of the 8th Annual Walk Off For Cancer. Photo by Sophia Squiccirini

On Sunday, Nov. 24, Chicago Cubs first baseman Anthony Rizzo held his Eighth Annual Walk-Off for Cancer at Pine Trails Park in Parkland, Florida. Rizzo walked and met up with many families, friends and fans. The proceeds from this event will benefit the Joe DiMaggio Children’s Hospital, the University of Miami Sylvester Comprehensive Cancer Center and provide direct grants to families battling cancer.

Anthony Rizzo was raised in Parkland and attended Marjory Stoneman Douglas High School. During his time at the high school, the alumni was an all-state first baseman for the school’s baseball team.

At the age of 18, he was diagnosed with Hodgkin’s Lymphoma and went through six months of chemotherapy, which was difficult for him and his family.

After being told he could return to his regular lifestyle, he realized that he wanted to help people battling cancer, along with their families. This led him to found The Anthony Rizzo Family Foundation.

“He started the Anthony Rizzo Family foundation because when he was 18, he was diagnosed with Hodgskin’s Lymphoma, and him and his mom in the hospital room said ‘when we beat this we are going to help families.’ So everyday he gives back to families fighting pediatric cancer to help them pay everyday household expenses, so no family ever has to choose between paying a bill, or changing a child’s life,” Executive Director of the Anthony Rizzo Foundation Abby Suarez said.

Before the walk, Rizzo spoke to the crowd about how difficult battling cancer was for him and his family and how they persevered through the process.

“The best part of the event was listening to Anthony speak. He genuinely cares about his foundation and for its purpose in helping families. Rizzo has not forgotten where he came from,” Parkland City Commissioner Rich Walker said.

During this speech, other families had the opportunity to speak about their children’s journeys battling cancer. They spoke about the aid in which the Anthony Rizzo Family Foundation gave to them in their times of need.

Coffee, bagels, donuts and refreshments were provided to event attendees. Some other activities included a raffle with prizes to win such as a jersey signed by Rizzo, a baseball signed by Aron Judge and much more. A fan of Anthony Rizzo, Jeff Bruno, won a picture frame that was signed by star hockey player Alex Ovechkin.

“I thought the best part was seeing the community come together and participate in such a great event to fight cancer,” Bruno said.

Anthony Rizzo raised over one million dollars through this event and the next walk will be held around the same time next year.