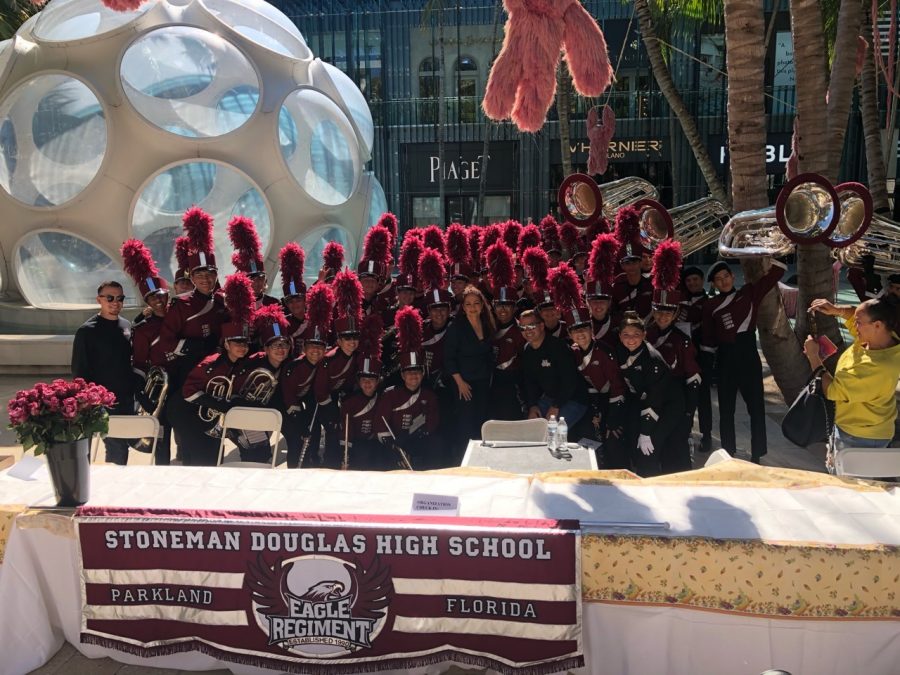 On Thursday, Nov. 28, members of the Eagle Regiment band performed at Estefan Kitchen. Located in the Miami Design District, the restaurant is a popular destination for upscale Cuban cuisine and live music.

After achieving success with their music, Gloria Estefan and Emilio Estefan opened their first Cuban restaurant in Miami Beach in 1992.

The Estefan family built their restaurant on a foundation of music and regularly hold live performances for lunch, dinner and weekend brunch. The entertainment is usually performed  by Alex Aria, a two-time Grammy-winning pianist, who is accompanied by the Estefan Kitchen cast. The restaurant is known for having the best Latin and Contemporary live performances every Friday and Saturday night.

For the menu, Corporate Executive Chef Christina Coupet designed reimagined versions of traditional Estefan family recipes. Voted by CNN Travel as “One of the BEST Restaurants in Miami,” some popular dishes include paella and lechón flatbread as well as various vegan alternatives to Cuban classics.

The Eagle Regiment performed at the Feed a Friend event, which the Estefan Kitchen has hosted for the past twelve years. The event is open to the entire community and offers a free Thanksgiving feast complete with both a traditional Thanksgiving meal and a Cuban style feast. Games, face painting and bounce houses were also offered as entertainment for anyone who attended.

“I think that hopefully, the band will get a little different meaning of Thanksgiving because these people make sure to give back to the community every year and it’s open to anybody and when I say the food is spectacular, it’s amazing and it’s free and they do it every year,”  Director of Bands Stephen Rivero said.

For the Estefan Thanksgiving event, Rivero chose the most qualified players from each section of the Eagle Regiment band and ended up with approximately 50 students.

The group used the same music they played at home football games and previous events, like the Waterford 5K, which meant preparation was minimal. However, they had to add some key players to account for the smaller group.

These select performers played as soon as the restaurant doors opened, and then played on and off from 11 a.m. to 12:45 p.m.The players got a break to try all of the dishes Estefan Kitchen had to offer. After the break, they played once more and then marched Gloria and Emilio Estefan towards a media press conference.

“I enjoyed this experience mostly because I was able to bond with my friends on Thanksgiving day and perform with them. The people there were so kind and welcoming towards us and the audience themselves were very supportive,” freshman Juliana Delgado said.

After a long day of giving back to the community by performing, the selected students made their way home to celebrate Thanksgiving with friends and family.

In the upcoming weeks, the Eagle Regiment plans to perform in the Coral Springs Christmas Parade on Wednesday, Dec. 11 and host a Winter concert at Marjory Stoneman Douglas High School on Thursday, Dec. 12.