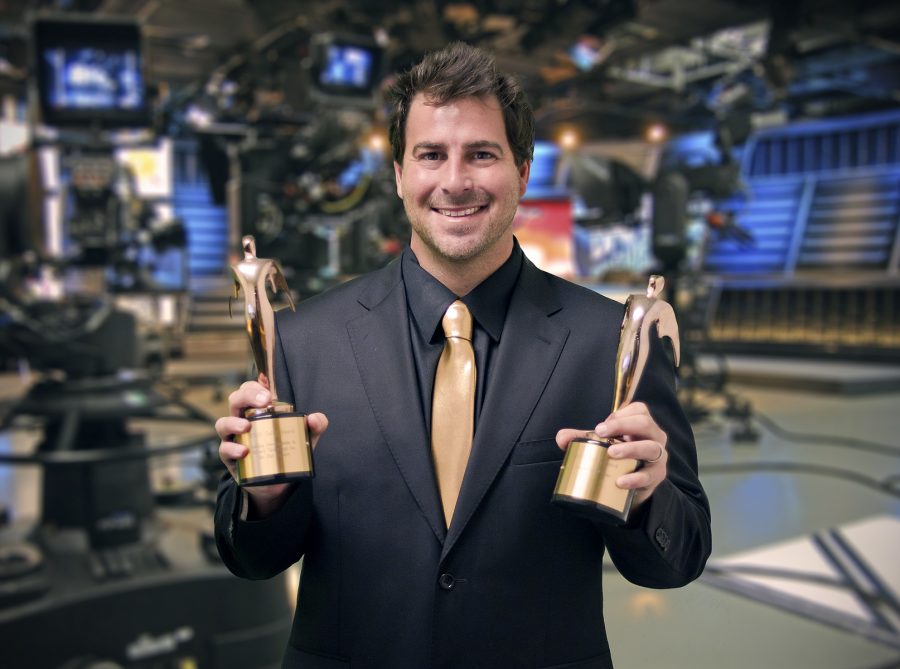 Evan Golden displays two of his awards on the set of "Eye on South Florida" . Photo Courtesy of Jack Namer

Evan Golden displays two of his awards on the set of “Eye on South Florida”. Photo Courtesy of Jack Namer

2019 marks the 20 year anniversary of Marjory Stoneman Douglas High School’s class of 1999. The graduates had their reunion on Saturday, Aug. 17 at the Funky Buddha Brewery in Oakland Park, Florida, where they were able to catch up with one another after two decades. Among these alumni was Evan Golden, the current host of the television show “Eye on South Florida.”

Golden looks back on his high school days with gratitude, believing it has immensely shaped his life. It was during his time as a part of the WMSD TV news crew where he discovered his passion for being in front of a camera.

“It [my career] started at Stoneman Douglas when my TV broadcasting teacher gave me the opportunity to be the on-air anchor and general assignment reporter, ” Golden said. “I just had a strong passion; it was never work for me. As many hours as I spent editing or watching videos, it has never felt like work for me.”

Golden graduated from the University of Central Florida in Orlando, Florida with a degree in Interpersonal Communications and Film and interned at WPLG Channel 10 ABC network.

Since then, Golden has appeared in a variety of programs including “The Mandy Moore Show”, “South Beach” and “Psychic Detectives”. He has also hosted local shows in both Fort Lauderdale and Miami, Florida.

“I found my passion in high school and never strayed away from it,” Golden said. “Twenty years later, I’m still doing what I love to do.”

Throughout his career, Golden has achieved a multitude of accomplishments, yet his most precious award is his South Florida Young Leader in Philanthropy Award he won in 2013 for his nonprofit work.

“Being recognized and being given an award for contributing and helping raise money and awareness for charities is a great feeling and hopefully I was an example to a lot of people that you don’t have to just write a check; there’s a lot of ways you can contribute and give back to the community,” Golden said. “There’s so many small, local charities and nonprofits out there that people are not familiar with.”

Golden was born and raised in South Florida and has been actively involved with the Parkland community, more so following the shooting on Feb. 14, 2018.

“I drive past Stoneman Douglas every single day. My kids are going to go to Stoneman Douglas. It is heartbreaking,” Golden said. “I tried to donate some metal detectors, but they would not accept it because they had to go through the Broward County Educational School Board. I attended the March for Our Lives in Parkland and many events with [the family of] Meadow Pollack and a couple other of the victims’ families.”

Currently, Golden has received widespread recognition for his video podcast, “Talk Golden to Me,” which is nominated for a Webby Award.

When asked what he would consider the most monumental moment in his career, Golden struggled to come up with a response.

“I don’t think I’ve had it yet,” Golden said. “But co-hosting an event with Dan Marino with Macy’s [is up there]. Meeting someone who was my childhood hero and has been a role model to me was pretty awesome.”

Golden hopes to gain the chance to each lunch with the current TV production students at MSD and talk to them about their aspirations.

“I’m a prime example that you don’t have to move to Los Angeles or New York to be successful,” Golden said.