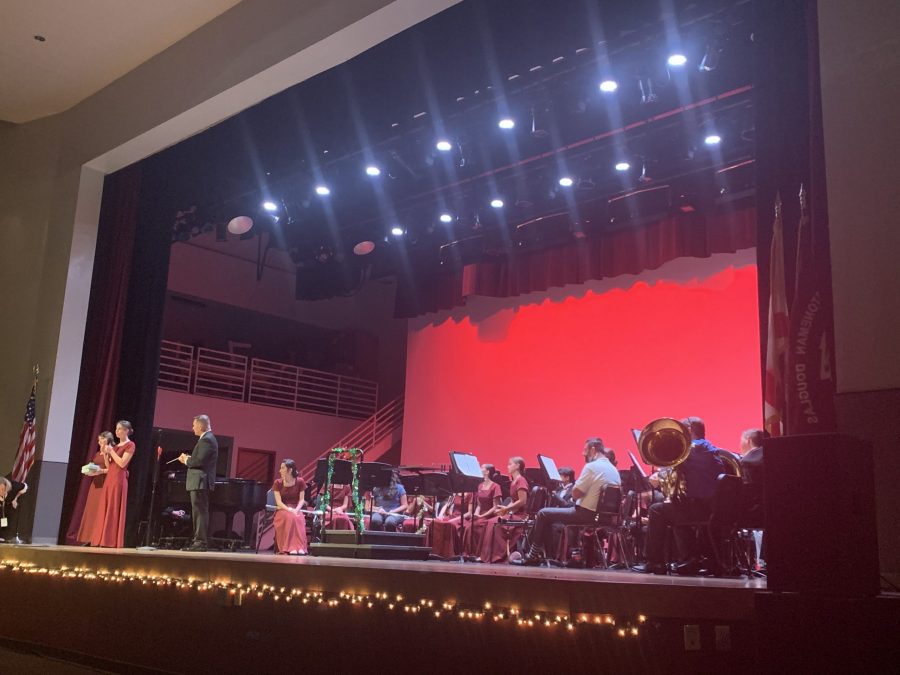 The auditorium was decorated for the holidays with lights and garlands. Photo by Delaney Walker

The holiday concert took place at 7 p.m. in the John Rusnak auditorium with an entry fee of $10 per person. Throughout the show, three bands performed: Concert Band, Symphonic Band and Wind Symphony.

The concert began with the trombone choir playing a piece titled “Festive Overture” by Dimitri Shostakovich. This piece was arranged by senior Justin Gruber, who also had a tuba solo.

“My favorite part is the saxophone feature because I play saxophone and those are my friends and they were just amazing in general,” freshman Brian Rosenblatt said.

In between the large group band performances, there was a wide variety of student duets and solos which included flutes, tuba, clarinets, and even singing performances.

The Wind Symphony then took the stage with their first piece titled “Sleigh Ride”, following was then two more pieces.

This year, a new tradition was brought to MSD, which is the Friends and Family Song. Every year the last song will be a performance filled with the Wind Symphony students, along with alumni, brothers, sisters, and parents. The piece played this year was titled “Insta Concert” which consisted of 30 melodies.

“It was fun to see different generations playing together. It was cool to play with experienced players,” sophomore Alayna Diaz said.

Following the concert, there was a reception in the band room. There were several treats and food items for people to enjoy, while celebrating the terrific performance.