Community gathers in holiday spirit for the winter wonderland event 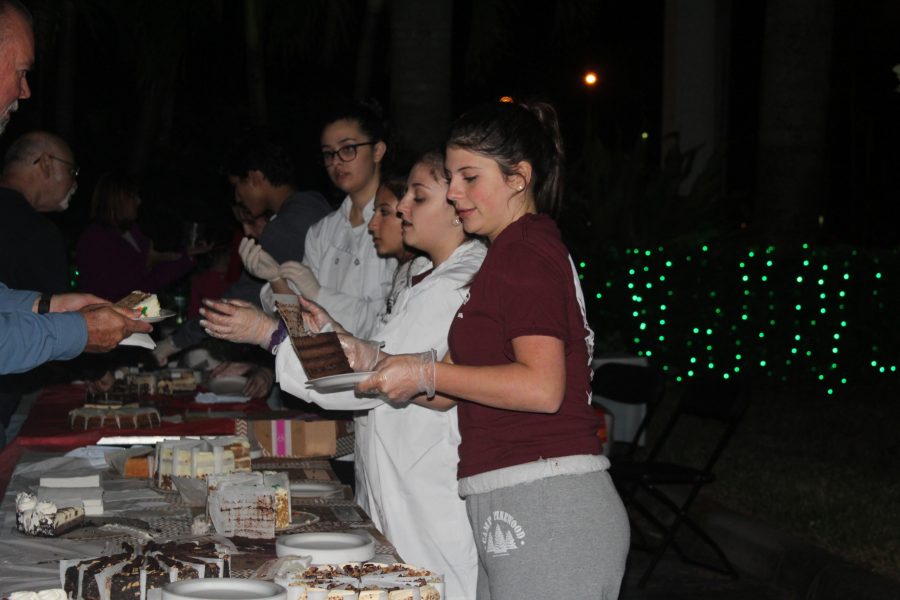 Those who attended the event were given cheesecake courtesy of the MSD culinary club. Photo by Nicole Suarez

“I think the fake snow was a really cool touch for the little kids because they’re all going crazy over it,” junior Brandon Dietrich said.

All the booths offered attendees a little something to experience or eat. Whether it was displaying an amazing product and letting you test it out or it was giving you all the tasters you could ever want, there was always something new to try.

Many of the restaurant booths had Marjory Stoneman Douglas High School culinary students working them. They were preparing the food, were giving out the food to the people in line and were making connections with those who came up to the booth and those who helped manage it.

“Working here was actually a lot of fun… it’s basically a food show, just Christmas themed. I got to work at the booth for Deja Blue, and they actually offered me a job and an internship there when I’m done,” Dietrich said. “Everyone was really nice and in the spirit…just very happy.”

The culinary teacher at Stoneman Douglas, Chef Kurth, explained how it was valuable for her students to work these events to get a sense of what it’s like in the industry.

“It’s helping to learn crowd control with customers that might be a little bit on the erratic side,” Kurth said. As well as people who have young kids that are coming through and keeping their hands off the line while we’re serving it and just making sure that the food doesn’t get contaminated.”

The culinary booths were very popular that their biggest problem was too many people wanted to get in on the delicious cuisine.

“The community is really embracing what we do as a culinary class of just getting the kids prepared to go into a job instead of just being a volunteer,” said Kurth “I’ve handed our information out to set up internships to have the kids go and train or have them actually come and work with kids.”

The venue was full of holiday cheer and provided service hours, learning experiences, and amazing food to all students that attended.

“This event was such a great way to kick off the holiday season in our community and I 100% recommend that everyone attend it next year, you won’t regret it,” junior Josie Sotter said.

This annual event will not be going anywhere anytime soon and every year it finds new ways to leave the whole community ready to embrace the new year.