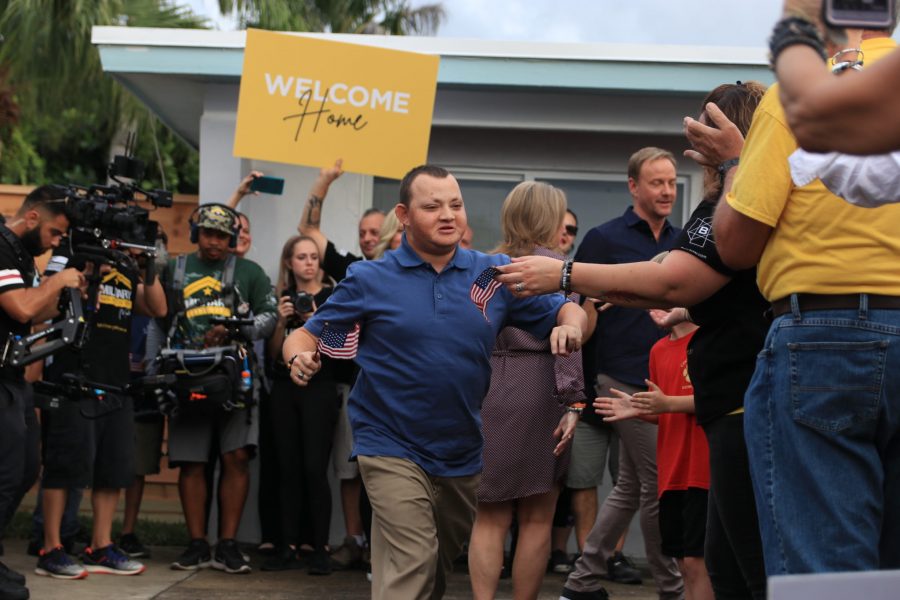 Corey Hixon runs excitedly to hug "Military Makeover" co-host Art Edmonds after his renovated house is revealed to him on Friday, Dec. 13. Photo by Darian Williams

Corey Hixon runs excitedly to hug “Military Makeover” co-host Art Edmonds after his renovated house is revealed to him on Friday, Dec. 13. Photo by Darian Williams

Chris Hixon, a United States Navy veteran and the former athletic director and wrestling coach at Marjory Stoneman Douglas High School, passed away during the tragedy on Feb. 14, 2018, leaving his wife, Debra Hixon, and two sons, Corey and Thomas Hixon, behind. He selflessly ran towards danger to protect the lives of innocent children, sacrificing his own life.

The Lifetime television show, “Military Makeover,” is dedicated to transforming the homes, and consequently the lives of veterans and their families. The Hixon family was nominated for the show and their home ended up being chosen as “Military Makeover’s” next project.

The first step of the makeover process involved Jennifer Bertrand, the show’s designer who grew up on a military base herself. Bertrand toured the house with Debra and Corey so that they could express which parts of their house they wanted to keep the same.

“I have a son who has special needs and I know how much your environment impacts the way you feel… my job is the psychology of design. When you experience trauma or tragedy, how do you honor the past but still move forward and have a place to heal,” Bertrand said.

After this process concluded, Debra and Corey were sent to spend ten days at the Seminole Hard Rock Hotel in Hollywood, Florida while their home underwent a complete renovation. While the Hixon family kicked their feet up and anticipated the results of the makeover, the crew and cast members of the show, along with volunteers from the community, put in countless hours of strenuous labor to make the home as amazing as they possibly could.

A wide variety of volunteers assisted, ranging from community members that had never met Chris, to some of the Hixon family’s closest friends. Frank Valliere attended the renovation frequently and was eager to help in any way he could out of love for the family.

“I was Chris’ assistant athletic director at South Broward [High School] for thirteen years, so our families became one. We were here with Debbie the day and night that it happened and it’s just a support system that we provide for her. Corey has his own room at our house…sometimes he just stays until [Debra] gets done [with what she’s doing], other times he just spends the night,” Valliere said.

The volunteers were mainly given tasks to complete by Ryan Stanley, the Director of Construction for the company that owns the show, and Bertrand.

“I talk to the homeowner a lot and see what their wishlist is… after that, we’ll go back and I will determine the entire scope of work for the entire project. I’m the one that designs the kitchens, I figure out the layout, work with construction for scheduling, and then also work with Jennifer,” Stanley said.

After ten days of tireless work and late nights, the home was ready to be revealed to the Hixon’s. Debra, Corey and Natalie Hixon, Chris’ sister, arrived at the home at 4:15 p.m. on Friday, Dec. 13 and were greeted by hundreds of individuals supporting their return. The Hixon’s reactions were full of shock and excitement.

Leo Jimenez was one of the many community members that attended the grand reveal and could not have been more pleased with the joy the “new” home seemed to bring the family.

“I’m a great friend of the family. I’ve known them for 16 years… When the accident happened, it just devastated my whole family and their family, and here we are to bring joy out of a bad story. We miss Chris forever… but I just hope that this makes it a little bit easier for Debbie to deal with. They wanted to rebuild their house since years ago, so her dream kind of came true, in a bad way,” Jimenez said.

The first episode of the Hixon family’s house makeover will air on Lifetime TV on Friday, Feb. 14, 2020.