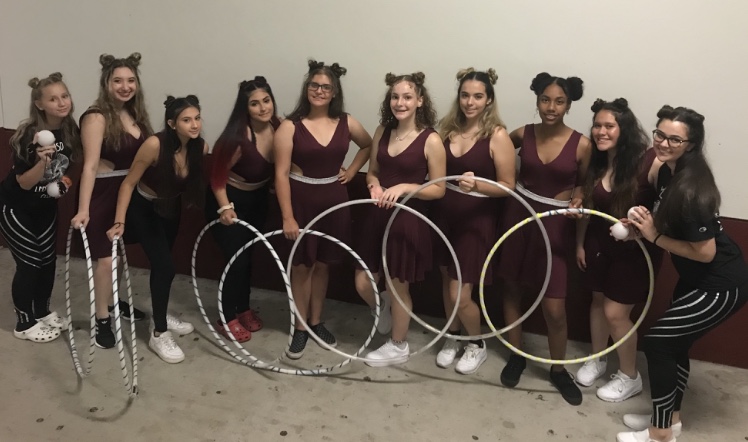 “We were asked to come and perform for the Children’s Hospital for childhood cancer. And we performed for the banquet just to show you know, prosperity for the organization,” LED Dance team sponsor Chelsea Briggs said.

The crowd consisted of both children and adults, some of which were kids that stayed at the hospital for treatment, and adults that donated for the cause. The Saturday night show brought smiles to people’s faces the moment they saw the entertaining moves and dances the students performed. It brought a unique and different aspect to the atmosphere audiences were typically used to seeing.

“When I first got to the school [Marjory Stoneman Douglas High School], I was already hula-hooping for fun, and it was something I did with music festivals. And I thought it’d be really cool to implement it in the high school setting because before I worked here, I worked at an elementary school where we had a hula hoop club that I set up,” Briggs said. “I wanted to see if we [could] adapt it to high schoolers so I mentioned it to one of my students at the time, she loved the idea so that’s when she took it to the board to start the club and now here we are three years later.”

Activities performed in the LED club are prompt for performance-based events and offer plentiful community service hour opportunities for the members to get the club’s graduation chord at the end of high school. Members have practice every Tuesday after school from 3:30 p.m. to 4:30 p.m.

”LED Dance [has given] me something to look forward to. I joined my freshman year, and it really helped me get comfortable around Douglas,” LED Dance President Jaiden Belmond said. “It was the one place I could be myself and just relax and have fun.“

All performances utilized complex hoop tricks and flow art, which often took hours of practice in and out of school for the students to perfect. This year’s team began practicing their tricks in August, and will continue to do so until the end of the school year in June. Open to all grades, the club only requires club dues at the beginning of the year to cover later costs and fees.

Although the MSD LED Dance team requires hours of commitment, it also poses as an opportunity to build friendships, skills and experience. The effect of the LED performances allow audience members to experience a new side of dance through the assistance of lights, silks and gadgets.

“Everyone is excited to perform. It shows when the performers have a good time, the audience has a good time,” senior Anthony Anaya said.

Performing at charity events, such as the one this past Saturday, not only entertained young audience members, but also made the LED performers happy to give back to their community through the arts.

“I think it’s really important for the kids to get out and support other people because not only do they get the the hours of experience and humbleness of working in those organizations, but it also brings a smile to people’s faces when they see those intricate moves and dance performances,” Briggs said.

MSD’s LED Dance has future performances planned throughout the year. One of their upcoming events, Mr. Douglas, a male beauty pageant for all boys in each grade, will take place on Jan. 15 at MSD. The pageant is MSD LED Dance’s third year involved and is the only fundraiser for the year. On Jan. 18 and 19, the club was invited to Fort Lauderdale’s Riverwalk to attend a performing arts festival called the Florida Flow Fest. The last big event planned is Relay For Life of Parkland and Coral Springs on Mar. 7, an important fundraiser to raise money and awareness for cancer.