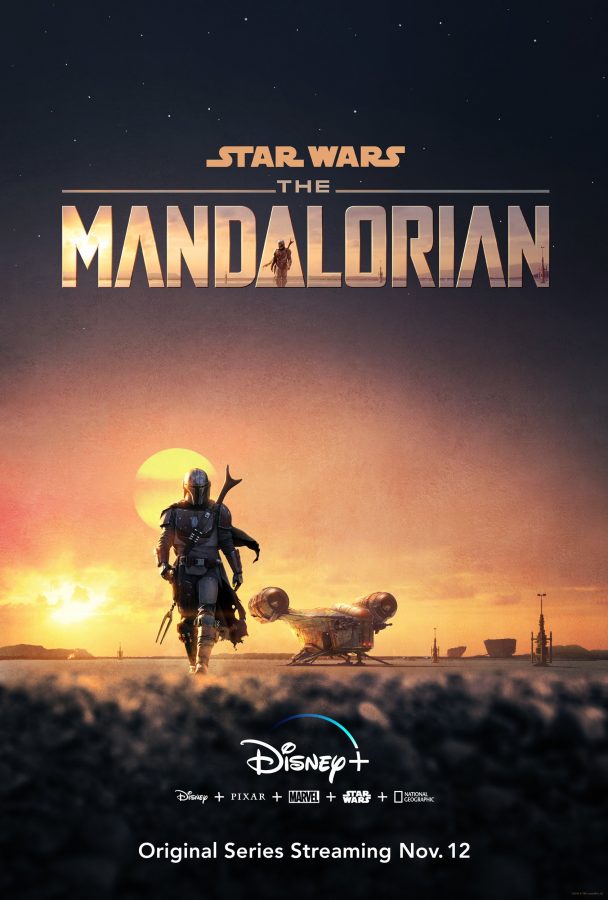 Official poster for Disney's "The Mandalorian".

With the release of its new streaming service, Disney+, Disney is offering a wide variety of entertainment across all of its existing franchises. Upcoming shows like Marvel’s “WandaVision” and “Loki”, have fans very excited for the future of the service.

“The Mandalorian”, an 8-part Star Wars series taking place after “Star Wars: Return of the Jedi”, is an enthralling and daring new entry into the Star Wars universe. Pedro Pascal of Game of Thrones stars as the as-of-yet unnamed Mandalorian, a rogue bounty hunter travelling across the galaxy in search of bounties.

“The Mandalorian” is a great story about maturing. The series starts with Mando being a lone warrior, not trusting anyone outside of his secret Mandalorian base. After finding the child (Baby Yoda), he’s taught a thing or two about caring for others. We see Mando grow to care for the child, and he sacrifices what he wants to protect and care for it. He begins trusting others to help him with the problems that he has managed himself for years.

Throughout the series, Mando is tempted with the freedoms of a relaxed lifestyle. As much as he would like to be free of the rugged bounty hunter life, he has to keep pushing on for the sake of himself and the child’s safety. Viewers can tell this takes a toll on him, and he sheds an emotional side that may surprise.

The timeline of the show makes it perfect for the pseudo-western genre. With the slow destruction of the Galactic Empire and the start of the New Republic, the galaxy is in disarray, with many different factions in power. This disorganization allows for the rise of the Bounty Hunters’ Guild, and some interesting confrontations.

While some episodes may not have a plot that directly relates to the overall season story-line, they offer excellent character development and give fans a greater picture of the timeline. Plus – it’s a show about a rogue space warrior and an adorable baby alien, who cares if there isn’t much of a plot sometimes?

Episode 7, titled “The Reckoning”, has the greatest amount of season-related story and leads directly into the events of the finale. The whole episode carries a tense atmosphere, and leaves the viewer on the edge of their seat. With so many cliffhangers and twists, fans hoped all of their questions would be answered with the season finale.

Overall, the series is fantastic. With great character development, costumes and set design, special effects and plot all present, it makes for a great addition to the Star Wars franchise. Pedro Pascal’s voice acting and occasional real acting are amazing, and he really makes the show into what it is.