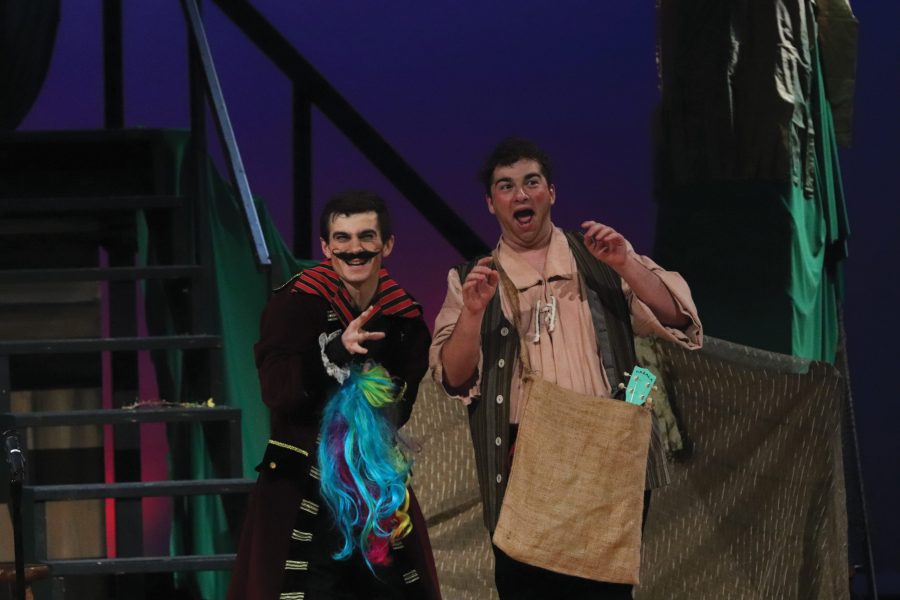 A Pirate’s Life. Seniors Jared Block and Ryan Senatore portray the characters of Smee and Black Stache on the opening night of MSD’s production of “Peter and the Starcatcher.” The pair made up the antagonist side of the musical. Photo by Sam Grizelj

Marjory Stoneman Douglas High School’s Drama Club presented their fall production, “Peter and the Starcatcher,” based on the 2004 novel by Dave Barry and Ridley Pearson, on Nov. 7-9. The play is a prequel to the story of Peter Pan.

“From the time that I select plays is almost a year. I’m constantly in search of plays that are good for my students that will be exciting, challenging and artistic for them,” drama teacher Melody Herzfeld said.

Following the unveiling of the selected cast members, students took their own pathways to make their characters come to life. This ranged from memorizing lines to going beyond limits the actors and actresses never knew they could surpass.

“After I learned my lines, I took a new approach. I said I’m going to try to inhabit the character and become the character instead of just Jared playing Smee,” senior Jared Block said.

The production crew oversaw the technical and artistic aspects of the show, mainly lighting and props.

“Throughout the rehearsal process, we would have meetings every so often, and we would get all of our scripts together and make sure we have the same cues,” production stage manager Alexandra Duffy said.

“I felt like I got some solid laughs out of the audience. Whether they were laughing with me as Black Stache on his journey to find a hero to fulfill his pirate fantasy, or at me with my facial hair malfunction that occurred a bit too frequently,” Senatore said.

The play covers the adventure Peter, Prentiss and Ted embark on at Mollusk Island. They meet a mysterious girl named Molly Aster and together overcome cohorts of pirates and thieves in their quest to protect an important trunk of star stuff, magical dust that alters people, from falling into the wrong hands.

“I had to dress up as a mermaid and sing [on] the ukulele. I learned how to play the ukulele for this show actually,” Block said.

The cast was required to escape comfort zones to perfect their roles.

“I’m not used to playing adult men, because like, I still have a high voice. I’m still a child,” freshman Logan La Pierre, who played Captain Robert Falcon Scott, said.

The costumes were assembled by costume designer Penny Williamson and the sets were created by set maker Beau Regard. Professional pianist Esther Umansky-Roth supplied live music for the production.

Throughout the play, questions about the origins of Peter Pan, Molly Aster’s identity, and Tinkerbell’s origin story were all answered.

“I looked at [the play] from a mom’s perspective because I was watching my two little ones watch the show. And the belly laughs that came out of them were unbelievable,” Student Government Association Adviser Danielle Driscoll said.

Numerous teachers were in attendance all three days of the production to support Herzfeld and her students.

“I thought the flexibility of the stage was excellent–the way that they converted the stage from act one to act two, with the way the leaves were mobile and [the] use of different sheets of ribbon to create the effects of water,” speech and debate teacher Jacob Abraham said.

Drama as a whole supports their own program through car washes, candy sales and many other fundraisers. “Peter and the Starcatcher” was sponsored by Temple Beth Chai and Marty Feldman’s SAT/ACT Prep and advertised by Taverna Evia and Coral Springs Center for the Arts. The money Drama Club earned from selling around 200 tickets each night at the play will cover the costs of the same production.