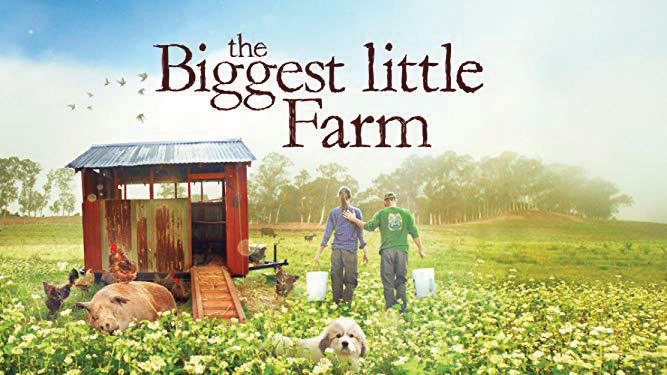 The documentary entitled “The Biggest Little Farm,” was released to the public in theaters and festivals across the United States on May 10, 2019. The film follows a couple, John and Molly Chester, and their rescue dog, Todd, originally residing in Santa Monica, for an 8-year period on an adventure to create and sustain a farm on their own.

In conjunction with being evicted from their apartment, because of Todd’s constant barking when they were out, Molly’s dream of growing the food she eats and cooks with for her job led them to purchase a 200-acre plot of land outside of Los Angeles, California named Apricot Lane Farms. Obtaining this land was made possible by the donations of investors and the guidance of their mentor, Alan York.

The documentary takes the viewer through a beautifully filmed journey of the trials and tribulations of building a farm from the ground up, bearing the weight of internal and external forces.

Besides John, Molly, Todd and Alan, the film also introduces the main stars, Emma the pig, who stands out as a mother of 13 piglets, and the girlfriend of a rooster. Other characters include a large number of chickens, ducks, sheep, cows and bulls.

The film is captivating as it covers the farm throughout its growth, showcasing the devastating winds, majestic rains and cozy sunshine that have graced the Apricot Lane Farms. Unimaginable closeups of bees buzzing around vibrant flowers and ladybugs crawling on crisp leaves, dripping with morning dew, can leave you with a sense of wonder and hope.

However, the hope that John and Molly carried with them was often challenged; first by the struggles of Emma, the pig, after she had given birth to over a dozen piglets, as well as drought seasons, battling coyotes and other predators and the untimely passing of their mentor, Alan, due to cancer.

The joyous shots of the animals coexisting were countered by a dark and eerie mood that presented itself from time to time. These included billows of smoke suffocating the land, the shooting of pests and damp landscapes. These darker images accompany the couple’s constant struggle to keep the farm above water.

While the film promotes sustainable living and the ability to maintain an old-fashion farming lifestyle, John also gives insights into the difficulties and dreams to coexist with the animals and nature that surround him and his family. John is forced to deal with his actions of shooting a coyote in order to keep his chickens alive, which leads him to question his belief of the power of an uncompromising idealism where humans and animals can lead separate but convergent lives.

John’s hope for his lifestyle is to live in harmony with creatures one cannot understand nor control, especially with a newborn on the way. The idea of coexistence appears very frequently throughout the film, tying this quest of a small family and their farm to something much greater than our own selves. There were many quotes from John sporadically placed between the years of farming, but one rings truer now than ever for how we treat the planet and each other:

“If the whole thing from the beginning was to live in harmony with nature… we made it this far with a comfortable level of disharmony,” John says as the film fades out. “The ecosystem of our entire planet works the same way, and when I look at it like that, it’s perfect.”

Everything in life has its complexities, but this film displays the necessary relationships we must create with each other and what surrounds us, in order to live in harmony.