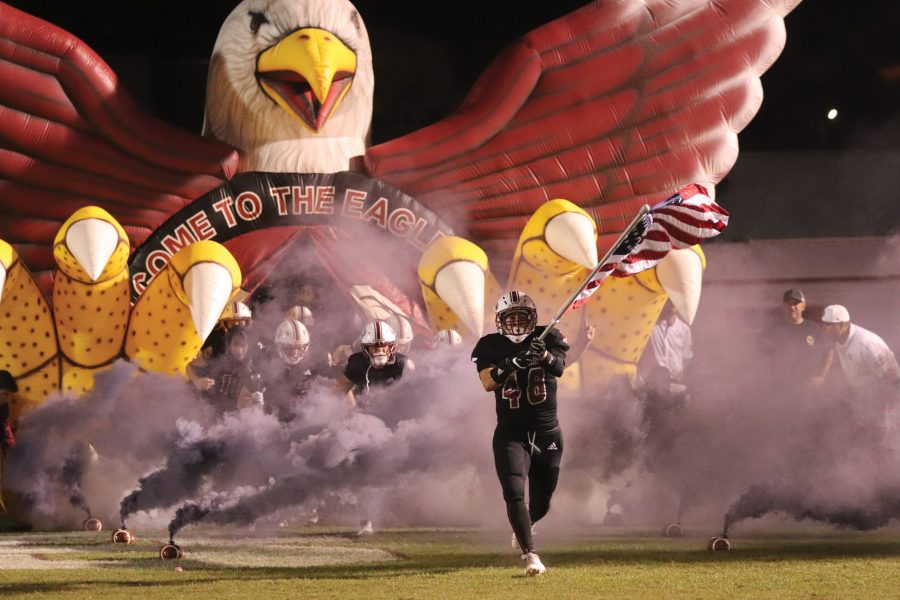 Devastating Defeat. MSD’s football team takes on Plantation High School during the senior night game on Friday, Nov. 1 at Cumber Stadium at 7 p.m. The Eagles lost to the Colonels 39-10. Photo by Jenna Harris

Devastating Defeat. MSD’s football team takes on Plantation High School during the senior night game on Friday, Nov. 1 at Cumber Stadium at 7 p.m. The Eagles lost to the Colonels 39-10. Photo by Jenna Harris

In August, if you were to tell any Marjory Stoneman Douglas High School student that their varsity football team would make it to the playoffs for the first time in 12 years, they would have said you were crazy.

In stark contrast, MSD’s 2019 team experienced a truly unique and unexpected level of success on the field.

This year started with a new look and feel to the team. Unprecedented achievement spanned all the way from the offense to the defense and the coaching staff as well.

“In previous years, it never quite seemed to come together as much… I believe previous teams were a bit more one dimensional. If a particular scheme didn’t work in the past, it didn’t feel as if the team and coaching staff had any alternative but to simply continue the same plays and just hope for a better result,” announcer and analyst Frank Krar said. “This year’s team was more adaptable in my opinion, and could generally adjust their offensive approach to overcome opposing defenses.”

With this unique attacking scheme and a new wave of talent, MSD challenged the impossible every week of the season.

Doing what many thought was impossible in winning eight straight games, averaging a 15-point margin of victory, having two shutouts and beating all of the rival schools in the division, MSD truly made history this year.

“I’ve been to almost every single home game this year and there has been an elevated level of energy to match the level of play on the field,” senior Sam Hendler said. “Our team has rallied and given us a season to remember.”

Ever since the beginning of the season, previous years’ results did not phase the MSD Eagles one bit; rather, it motivated them.

The Eagles powered into the 2019-2020 school year, hitting the weight room and putting in work to break through the glass ceiling. The team grew hungrier by the week and was chomping at the bit to hit the field.

However, this feeling was stalled before the season could kick-off, as mother nature had other plans. An untimely rain-out of the season opener forced the Eagles to maintain that hunger one week longer.

On Friday, Aug. 23, the Eagles finally got the chance to show what they were about at Colonial High School, pulling out a late 38-34 win.

“To be able to go up to Orlando for the season opener and secure a win wasn’t just exciting, it was satisfying,” tackle Anthony Erale (66) said. “Everyone on the team has been grinding like crazy for the last seven months to make this the season Douglas becomes a playoff team.”

Two weeks later, MSD jumped out early on Cypress Bay High School, taking the Lightning down with a final score of 30-16.

“It’s so important to get a win like that because it gives us so much momentum going into the next week,” tight end Ryan Belk (80) said. “[Monarch] is a big cross-town rival, so it was important to win that. We need to stay focused though and stay humble and keep going week by week.”

Back-to-back home games suited MSD well, too. First, a close win over Monarch High School, which set the tone for the rest of the season occurred. Then, a blowout over Coral Springs High School in the Pig Bowl gave the Eagles their fourth win.

The Pig Bowl marked a point in the season where MSD knew they had become a true playoff contender. They proved they were a threat to other teams within their district.

J.P. Taravella High School posed no threat to MSD, as the Eagles took down this cross-town rival by 22 points. This gave MSD huge momentum just in time for the Homecoming game.

“The game meant everything to us after them beating us in a super emotional game last year,” linebacker Ryan Schroy (34) said. “We came into their house this time and ruined their Homecoming, which was the best medicine for a [2018] loss that still hurts.”

The Homecoming game at MSD this year was buzzing. The energy was matched with a huge shutout over West Broward High School, with the Eagles winning 36-0.

The following two away games against Nova High School and Coral Glades High School were quite impressive for MSD as they won both handily.

“Having back to back shutouts and another big win has really given the offense and defense confidence going into the district championship game and state playoffs,” quarterback Matt O’Dowd (4) said.

The scene was set and MSD had a chance to win one of its most momentous games of all time.

An early lead in this game led many of the fans in attendance to assume that once again MSD was going to roll their opponent.

As a shock to many, by the conclusion of this game, Plantation had bested MSD, 39-10.

An overwhelming response to MSD’s early lead by the Colonels and an explosive offensive attack stunned the Eagles, and just like that, MSD’s undefeated season was over.

This was a tough end to the regular season for MSD, but it did not take away from the incredible overall achievement of this team.

The Eagles then had their chance to break through the glass ceiling in the playoffs with a home matchup against Miami High School on Friday, Nov. 8.

However, this game did not go the Eagles’ way, seeing a lopsided loss in a battle that exposed MSD’s lack of postseason experience in a 28-3 shellacking.

“It didn’t end the way we wanted it to, but it was great for these guys. We had a lot of success [this season] and it was really positive,” Head Coach William Short said.

Regardless, MSD broke records this season and is looking toward the future, hoping to do the same and more in seasons to come.

This hope spans from the team to the student body and to the staff as well.

“Overall, I liked the attitude and spirit the team displayed this year. There were fewer mental errors, in particular, silly personal and unsportsmanlike fouls were way down,” Krar said. “I like where this team is headed, and I’m hopeful they can keep this year’s momentum and build on a great season.”

With a hopeful outlook for the future, MSD will strive to return to glory next year, despite the loss of key seniors and a long off-season to work through.