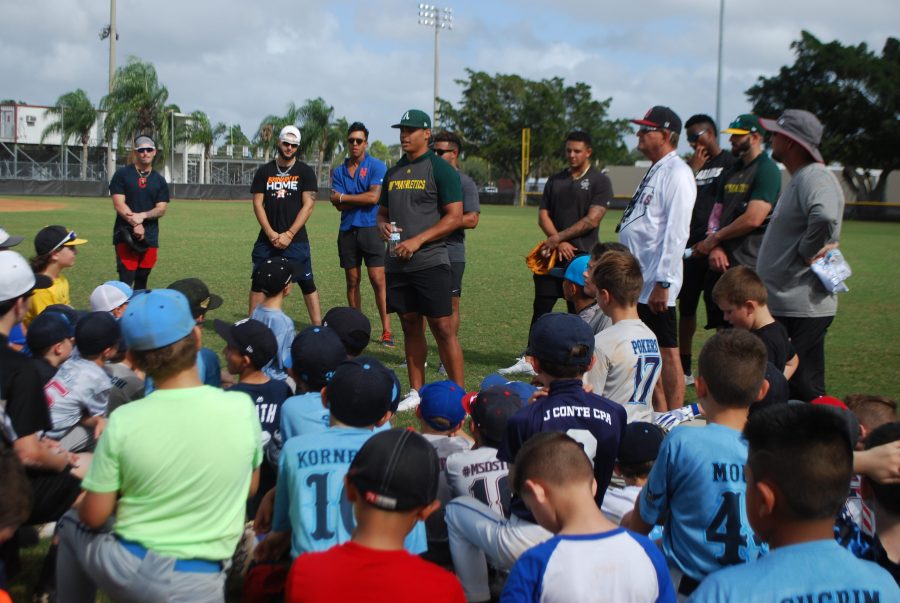 Oakland A’s player Jesus Luzardo thanks kids and families for participating in their baseball clinic. Photo by Sophia Squiccirini

Both of the players hosted this event to strengthen the fundamentals of pitching, catching, throwing, fielding, base running and hitting.

Colton Welker and Jesús Luzardo attended Marjory Stoneman Douglas together. Colton Welker was raised in Parkland and played for the Parkland Pokers growing up.

“I played for the Parkland Pokers, and I see a lot of those shirts and I did this just to give back to the kids, I was one of them not too long ago. I remember these camps I used to go to, I loved it, had so much fun, and learned a lot. I’m doing this for the kids to teach them some fundamentals and hopefully drive them to get to the major leagues,“ Welker said.

Other major league players were there to support and help out Welker and Luzardo in the clinic.

“At this event, I came out to support Jesús and Colton, and to give some pitching lessons to kids. We had fifteen-minute groups of different kids just going through balance drills and things that I do to get ready for games and practice. It’s not just going out there and throwing, it’s more working on your form,” Oakland A’s player Mike Fiers said.

Many players from the MSD Varsity and JV Baseball team came out to volunteer and help out with the little kids. They participated in stations where they each did different things with the kids such as, hitting, pitching, catching and throwing.  Every fifteen minutes they would rotate stations so everyone got a chance at learning these different skills.

MSD Varsity Baseball player Cameron Harris helped show the boys how to stand when they pitch. He helped them work on their form to get better at getting out better pitches as well as other basics of baseball.

“I rotated at each station working with the kids on outfield, base running, infield, pitching and hitting. It was a really fun time getting to talk to the kids and helping them grow as baseball players,” sophomore Cameron Harris said.

It was a free event that included snacks and beverages. In addition, a raffle was held where you could win a signed glove.