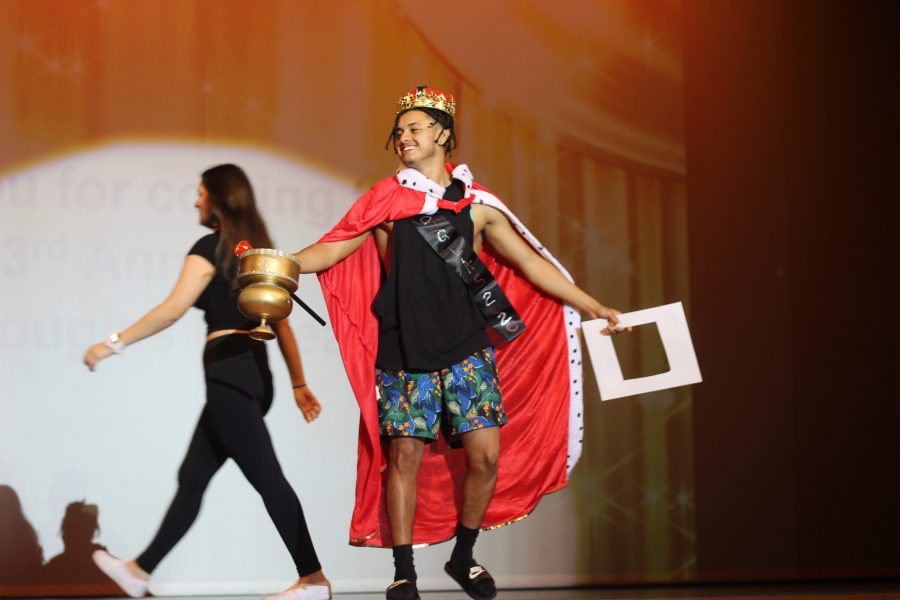 Junior Abel Ossers basks in the spotlight as he accepts the title of Mr. Douglas. Photo by Kaleela Rosenthal

Junior Abel Ossers basks in the spotlight as he accepts his title as Mr. Douglas. Photo by Kaleela Rosenthal

On Wednesday, Jan. 15 at 7 p.m, Marjory Stoneman Douglas’ annual Mr. Douglas male beauty pageant was hosted in the school auditorium. An entrance fee of $5 was charged to attendees in hopes of raising proceeds towards the LED Dance Club. Handheld fan faces of the candidates were sold at the door for a $1 for friends and family to go the extra mile in support of their candidate as well.

Students from each grade level were voted as potential contestants for the pageant a week prior to the event. The contestants included senior Nick Joseph, junior Abel Ossers, sophomore Dennis Morgan, and freshman Tyler Rhenals.

The beauty pageant was divided into different portions including a swimsuit portion, interview portion, and a talent portion. Each contestant aimed to entertain the audience and the judges which included Debate teacher Jacob Abraham and English teacher Stacy Lippel.

“Watching everyone’s reactions to the craziest things the guys did on stage is one of the reasons I love going,” sophomore Grianne Popen said. “Mrs. Briggs popped off.”

“I thought it was very funny how the people in charge made some mistakes and yet still went along [with the show],” junior Brandon Rush said. “It made it feel more genuine and made the experience more entertaining.”

During the second half of the event, judges tallied their final thoughts on each performance followed by the winners being announced by hosts seniors Isaac Christian and Baar Machluf.

LED Dance Club plans on continuing the Mr. Douglas male pageant as it is the clubs only fundraising event of the year.