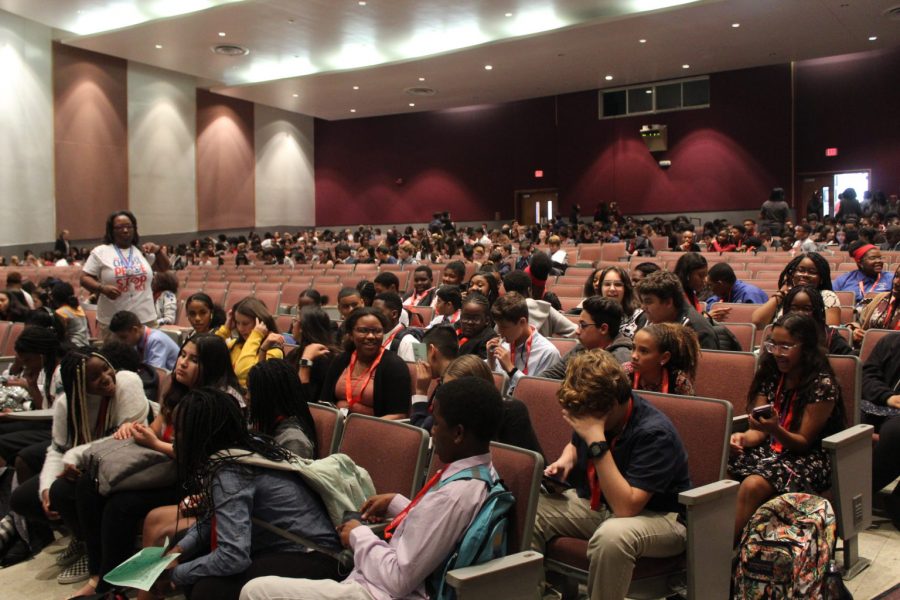 Middle school students from all around the district sat in the auditorium upon arrival, awaiting further directions.

On Tuesday, Jan. 14, Marjory Stoneman Douglas High School hosted a debate competition for 750 middle school students from Broward County. Teachers and students from approximately 35 schools started arriving shortly after 1 p.m. and were directed to the auditorium. Once they were organized, the attendees were released onto campus around 3:30 p.m. to begin the first round.

“They [middle school debate students] have been preparing since August, since the beginning of the school year,” McNicol Middle School assistant debate coach Dante Garaflo said.

The judges are in charge of deciding placement in rounds. When competing in a debate event, one of two students or teams are awarded for winning, while competitors in the speech events receive an award for being in either first or second place. Every competitor has a specific topic they are responsible for researching and adapting within their own events; these topics can range from fairy tales like Rumpelstiltskin to current politics such as gun reform.

“I’m doing the one where you have to do a certificate system on owners who have guns, or firearms. And then the other one is to fund LIHTP, it’s a company that helps families pay for their home payments,” Aiden Agudelo from Ramblewood Middle School said.

Room monitors, MSD students who proctored competition rooms, were recruited through clubs and service organizations on campus such as the National Honor Society and Key Club, and by word of mouth. Monitors were rewarded with pizza and refreshments if they signed up before the event; however, monitors who simply showed up with no warning did not receive the same benefits.

“Sometimes I either do judging or I help with selling concessions,” senior Austin Roy said. “I think introducing kids to debate at such a young age gives them that basis to understand debate as a whole and grow as a debater. It also gives you a couple extra years of experience in debating which can be really helpful.”

While there is no award ceremony, the middle school coaches keep track of their students’ results throughout the tournament. Based on these results, the top ten percent of students in each event are given an award by their coaches.