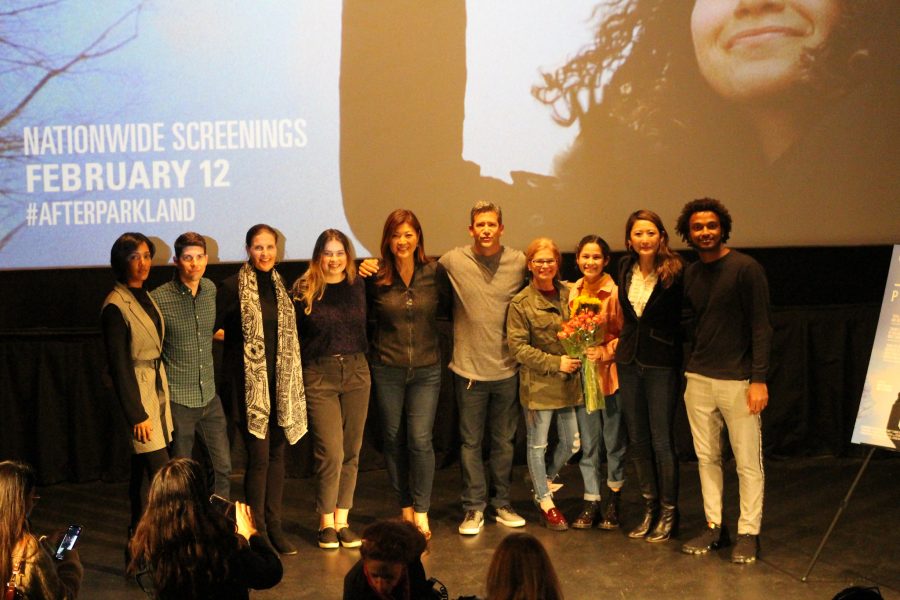 On Wednesday, Jan. 22, the “After Parkland” documentary, directed by Emily Taguchi and Jake Lefferman, debuted at 7:30 p.m at Savor Cinema in Fort Lauderdale. The “After Parkland” cast participated in a Q&A session, moderated by ABC’s Nightline anchor JuJu Chang. Following this local screening, the film will be playing in theaters nationwide on Wednesday, Feb. 12.

“After Parkland” is a film that depicts the transformative journey from grief to healing and activism, as it documents the aftermath of the shooting that occurred at Marjory Stoneman Douglas High School on Feb. 14, 2018.

“We were so focused on, you know, the fact that these families put their trust in us to tell the story,” Lefferman said. “We really were focused on making sure that we got it right. And the stories that they were trying to tell and the reality that they wanted the world to understand.”

The film follows the lives of both Parkland students and parents post-shooting, providing an inside look at their own personal process of healing. As its focal subjects, “After Parkland” features Victoria Gonzalez, Sam Zeif, Dillon McCooty, David Hogg, Manuel Oliver, Patricia Oliver, Brooke Harrison and Andrew Pollack.

Prior to being the directors of the film, ABC News producers Taguchi and Lefferman were initially in Parkland to report on the incident as a breaking news situation. However, the drive and passion they witnessed in the community while on the scene resonated with them.

“I think pretty early on, as soon as we started interviewing students and families and meeting the community, we really felt like, you know, this might be different,” Lefferman said. “We were inspired by the people on the ground and the students that we met, we were inspired by their courage, their bravery, their conviction. And so I think that’s why we wanted to make the film.”

After deciding on continuing forward with the film, one of Taguchi’s greatest concerns was how to approach students, particularly those who were in the building that day, and asking them to recall their experiences.

“Each case was different. With Brooke [Harrison], we just called her family, I spoke to her dad and asked for in-person meeting, just so we have a chance to meet them, get a feeling for their family and their dynamics and what she went through but more importantly, so that they have a chance to see who we are as humans, and start building a rapport and see if there is a way to form a trusting relationship,” Taguchi said. “You try to meet with them before you ever ask to turn on a camera make sure that they’re comfortable and that they really believe in telling their story.”

Filming continued over the course of the year, documenting the monumental events in the community such as the first day back at school, the March 14th walkouts and the reopening of the Parkland basketball rec league.

“I wish for this film to teach empathy. It allows outside viewers to take a step into our shoes, into our school,” MSD alumnus Victoria Gonzalez said. “They can see the heartbreak in my eyes. And I can’t be sorry for the way it makes them feel. If we can feel like this every day for the rest of our lives, they need to feel it for the day, and decide what progress to make with that pain.”

Prior to the initial viewing of the film at Tribeca, the subjects featured in the film, as well as their family, were invited to a private screening of the film in April.

“I was at a loss for words; it was a really powerful film,” MSD alumnus Dillon McCooty said. “I think everybody needs to see it.”

The private screening was the first time the film was seen after being finalized. Gonzalez disclaims viewership of the film for MSD alumni and current students if they feel it may harm their healing.

“Tears. There were many tears. It’s a crazy reality check,” Gonzalez said. “It brings me right out of the shock and into the real world. This is the life we must live now.”

“After Parkland” will be screened in over 100 cities nationwide on Wednesday, February 12, the National Day of Conversation, in order to memorialize the second anniversary of the shooting at MSD. The trailer can be seen at https://www.youtube.com/watch?v=VBernqMYbcA&feature=youtu.be.

Tickets for these screenings must be reserved by February 3 and additional information can be found at http://bit.ly/afterparkland