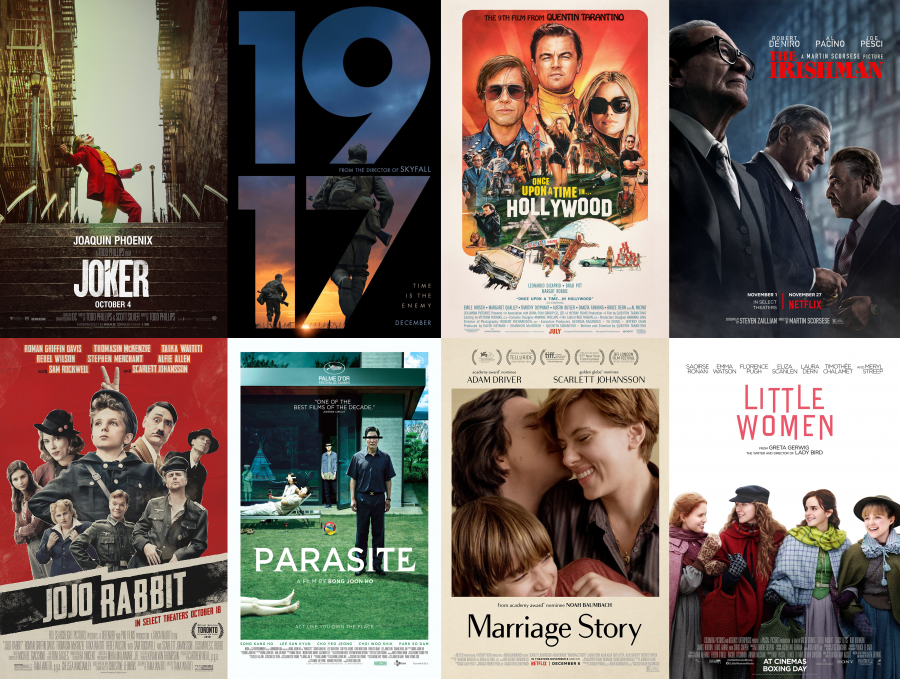 2019 was an innovative and exciting year for filmmaking. It saw prominence with dark, character-driven movies like “Joker” and “The Irishman.” It saw jaw-dropping performances from actors like Adam Driver and Scarlett Johansson in “Marriage Story” and Joaquin Phoenix in “Joker.” It also saw the “end” to the two highest-grossing film franchises of all-time:  “Avengers: Endgame” and “Star Wars: The Rise of Skywalker.”

There were definitely a handful of movies that stood out from the crowd, and it shows. The nominations for the 2020 Academy Awards feature the same small set of movies in almost every category. These movies are, in order of the most nominated: “Joker” (11), “Once Upon a Time… In Hollywood,” “The Irishman,” “1917” (10),  ”Parasite,” ”Marriage Story,” “Jojo Rabbit” and “Little Women” (6).

“Joker” takes a heavy turn from the typical superhero movie. Starring Phoenix as Arthur Fleck or the Joker, the film portrays the dangers of a neglectful society and how it can lead a person to chaos. Phoenix delivers perhaps the best performance of the year and brings a breath of fresh air to the Joker character.

“Once Upon a Time… In Hollywood,” the ninth film directed by Quentin Tarantino, shows the dying career of a 1960s TV actor Rick Dalton (Leonardo DiCaprio) and his stunt double/best friend Cliff Booth (Brad Pitt). Tarantino uses this movie to show his love of classic Hollywood and spin a new take on the Manson Family’s history and the death of actor Sharon Tate. DiCaprio shines, but Pitt definitely takes the cake with his supporting performance.

“Mixed feelings about that one. The very last act was great, but everything before that was kind of a confusing mess to me. I mean, I see what they were trying to do with it, but I don’t think it was that well-executed. Although, Leonardo DiCaprio did a good job, and Brad Pitt should definitely win Best Supporting Actor,” physics teacher Carlos Mercado said.

“1917” is a semi-true story about two British soldiers during World War I who make their way across war-torn France to deliver a message that would save 1,600 soldiers. It’s shot to look like the entire thing was filmed in one take, which really highlights the action and the perspective of a soldier. The film carries strong messages about the nature of war and the limit of the human will.

“‘1917,’ I think, is a technological wonder of a film, which somehow manages to capture these extremely amazing and scenic shots, whilst differentiating itself from other war movies, in that it tells a story more visual than just shooting,” freshman Henry Maruna said.

“The Irishman,” the latest film from director Martin Scorsese, tells the story of an elderly hitman recalling his life of crime and deceit while in the mob. Starring Robert De Niro, Al Pacino and Joe Pesci as real-life historical mobsters, the movie offers its take on the fate of mob boss Jimmy Hoffa. At over three and a half hours long, Scorsese sets this apart from other mob films by replacing action and dialogue with silence, allowing both the characters and viewers to think.

“Parasite,” from Korean director Bong Joon-ho, is a dark comedy/thriller about the lives of two very different families, one living in poverty, one living a life of success and luxury. The former work their way into jobs for the latter, like driver and housekeeper, by driving out the existing workers. It’s probable that the main reason why this isn’t more known is the fact that it’s in Korean, which may be a drawback for viewers. With an ensemble cast, the story is less about individual characters and more about the dynamics between the upper and lower classes.

“Marriage Story” paints a picture of a rough and divisive divorce process and the effects it can have on a family. The stunning performances from both actors have serious potential to take home Best Actor and Best Actress.

“Jojo Rabbit,” the story of a small boy living in Nazi Germany during World War II, is directed by, written by, and starring Taika Waititi, director of “Thor: Ragnarok.” Jojo (Roman Griffin Davis), a 10-year-old living with his mother, is forced to question his blind support of the Nazis when he encounters a Jewish girl hidden in his house, brought by his mother. With this film, Waititi brings a fantastic dark comedy about family, loyalty and growing up.

“It uses humor at exactly the right times, so it combines humor and a serious situation really well,” Maruna said.

As usual, the nominations drew criticism for certain snubs. Many cinema fans are angry that director Greta Gerwig was not nominated for directing “Little Women.” There has only been one female director to even win the Best Director category, Kathryn Bigelow for “The Hurt Locker.”

Fans were also disappointed about the lack of any nominations for “Uncut Gems” and Adam Sandler. Taking a departure from his normal films, Sandler brought a strong performance that many would never have imagined possible.