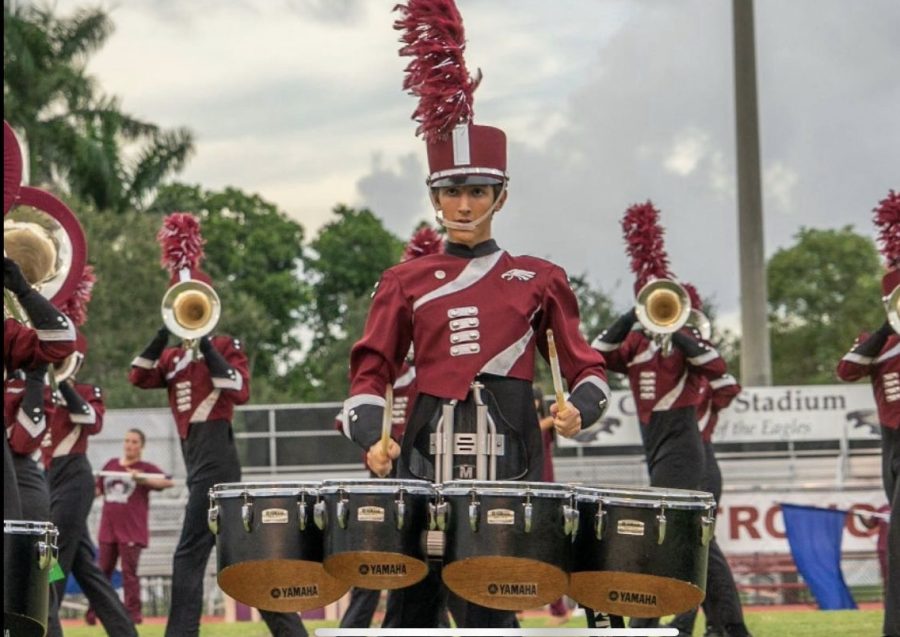 Asher Perez, a junior at Marjory Stoneman Douglas High School, has been a musician since he was a kid. Born in Tallahassee, Florida, Perez grew up with a strong musical influence from his family.

“Music sort of runs in my family. My dad is a band director and my mom was a pianist and a singer. My sister was in band, my grandparents have been in band. My great-grandpa played the saxophone for the jazz group in the Army Band, so it’s just sort of part of my life,” Perez said.

As a result of moving, Perez has seen many different perspectives from around the different parts of Florida. After finishing fifth grade, he moved from Florida’s capital of Tallahassee to Gainesville, which he called home for four years. He came to MSD and the Broward County community during his sophomore year of high school. Throughout his years in various locations, Perez never lost his passion for music.

“I’ve had a piano in my house my entire life. I’ve worked out songs by ear on the piano for as long as I can remember. I used to sing with my mom when I was five. And then in sixth grade, I joined band and started playing bassoon. In seventh, eighth and ninth grade, I made vocal all-state,” Perez said. “I also was in choir, and I moved to percussion in seventh grade for marching [band]. And then in tenth grade, I moved full-time percussion.”

Although Perez is a phenomenal musician, he is also an exceptional student. At his old school in Gainesville, he was involved in the leadership program, the coding club and the Mu Alpha Theta math club. Perez also used to participate in fencing and swimming.

In his two years at MSD, Perez can be described as a sensational tenor drum player with MSD’s Eagle Regiment marching band. As of his junior year, he now partakes in arduous classes and tutors everyday he doesn’t have rehearsals, which is only one day of the week. In addition to his already hectic schedule, Perez plays on the tenor drums with Stryke Percussion, an ensemble devoted to the “growth and excellence of youth in the community through music, dance and the performing arts.”

“[Music has] given me a lot of opportunities to grow as a person from a young age because it’s exposed me to being in a high school group in seventh grade. It exposed me to a lot of responsibilities and musical experiences and traveling outside of where I grew up, traveling outside of what I knew to explore new things,” Perez said. “I don’t think that I would have been able to have that without music as part of my life. It’s helped me really explore emotional connections with other people [and] mature as a person.”

Music has vastly impacted Perez’s life since he started. His past and present with choir and many instruments, such as piano, bassoon and percussion, have shaped him into the student performer he is today.

“Being a musician, I just like the feeling you get when you put yourself into a piece of music, especially in a group of people. It’s indescribable, other musicians understand what I’m talking about, but no one can really put it into words unless you just sort of experience it for yourself,” Perez said.

Despite being a talented individual, Perez is also described as a funny and trustworthy person by his friends. His devotion to music has given him the opportunity to make lasting connections and relationships with other performers.

“Asher is a very busy person and he almost never makes an excuse to take a break from the grind,” junior Jessie Shteif said. “He’s a very outgoing, reliable, committed and amazing friend.”

Hand-in-hand with hours of learning, practicing and performing, Perez has transformed into an outstanding musician with many accomplishments. From the years of experience, his immense love of playing complex notes and striking sick beats have sculpted him into a musical enthusiast, which he wishes to further progress in his future.

“I’m considering music performance or composition as a degree. If I don’t, then I’ll probably just be an engineer, but I will always continue to do music,” Perez said. “I will find a way to keep music as part of my life because I don’t think that I would be able to not have it.”

Perez can be seen performing with MSD’s Indoor Percussion group, in addition to the Stryke Percussion ensemble. In his approaching senior year, Perez is looking forward to putting a final cap on his high school career and plans on using his experiences in his future life endeavors.