[Review]: “Neanderthal Opens the Door to the Universe” is not as powerful as it seems 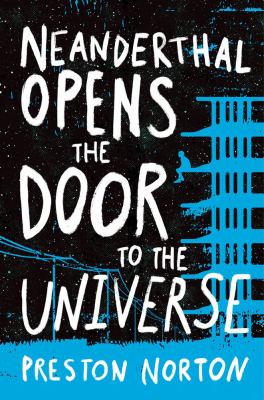 Cover for Preston Norton's novel, "Neanderthal Opens the Door to the Universe"

Imagine this: the most popular person in school comes back from the hospital and claims that God told them that they need to work with the high school loser in order to make their high school suck less than it already does. Are they willing to take the offer?

Well, in Preston Norton’s thought-provoking novel, “Neanderthal Opens the Door to the Universe,” 6 ’6 ft and 250-pound student, Cliff Hubbard, begrudgingly takes the offer from none other than the school’s star quarterback, Aaron Zimmerman. Together, the two take the reader on a life-altering adventure with the unlikely dynamic duo that reveals more hidden truths that are stuffed in the lockers of Happy Valley High School.

The book begins with a rocky start to the relationship between Cliff and Aaron. The two, being on opposite spectrums of the school, don’t exactly have a reason to interact. Norton doesn’t bring a purpose to their relationship, making it seem more parasitic than anything else. Aaron only uses him for the benefit of completing his quest, which causes more harm than good and doesn’t make the relationship any stronger in the book. Although the boys begin to bond, it feels like Norton doesn’t see how he can easily separate the difference between a good relationship and being used.

Even with Cliff struggling to deal with his brother’s suicide, the author does not make his emotional moments powerful enough to clutch the reader’s heart. Instead, it causes the reader to awkwardly cry out for help, which makes the reader sympathize less with Cliff. While suicide awareness is important, it is not Norton’s main focus of the book and he continues to get off track from the main plot.

If Norton chose to write from Aaron’s point of view, he could have built the significance of the tragedy Cliff had faced through Aaron’s eyes. This would have demonstrated the importance of living, the main theme Norton emphasizes in his novel.

While Cliff deals with his grief, Aaron faces similar emotions throughout the novel. However, it would pull the reader’s heartstrings more had these emotions been revealed through Aaron’s point of view. It would also allow readers to muster empathy and understand the dark side of such an action.

Norton not only creates a rocky relationship with Aaron and Cliff, but he also does the same with Cliff and his girlfriend, Tegan. They have no reason to actually date in the first place, but because romance seems to play an important role in the story, he adds it in any way.

The attempt for Cliff to ask her outcomes out of nowhere, as there is no mention of attraction for her is nowhere near her introduction. There were no signs, no mentionings, nothing near the idea of ‘I love you’ until Aaron comments something about her behavior that states she likes him.

But while Norton completely obliterates the understanding of how to build relationships and emphasize important points, he does bring awareness to other topics. He often discusses the idea of dealing with abuse and drug usage through the adults in the story.

With Cliff’s dad being a bum who verbally and physically abuses Cliff, he is able to demonstrate the signs of what the life of abuse could hold. Norton also explains to readers that it is okay to leave a toxic relationship through Cliff and his mom.

As for Tegan’s mom, Norton is able to demonstrate the destructive path of what others face when dealing with drug addicts. He shows the downfall and the hopes it brings when it comes to Tegan’s mom, as he shows the imaginable hopes and desires Tegan has for her neglectful mom.

Norton is also able to explore the basis of homophobia and how awful it gets for those in the LGBTQ+ community. But it is not just the simple ‘Christian – hating’ torment, it also demonstrates other forms of hate towards those who identify as LGBTQ+.  Those who identify as LGBTQ+ in the novel are not welcomed by the other kids in the school with kids destroying their lockers and taunting them around the school.

Overall, the book seems rushed and it does not feel like the author put a lot of effort into building his characters or, as a matter of fact, his book in general. Everything seems to be placed in different directions him often getting sidetracked from different points of the book. There is barely enough focus on the main plot in order to give the reader the taste of satisfaction when the reader completes the novel.

While Norton has beautiful descriptions that allow the reader to manage to continue the lengthy piece, the reader could often lose the main purpose of the book, which is to make Happy Valley high school a better place.