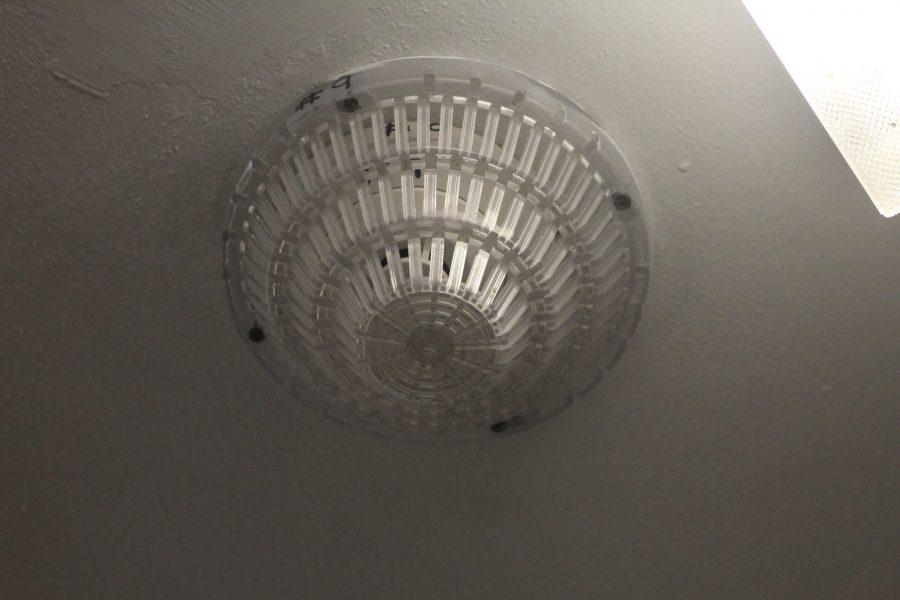 The detectors used in MSD bathrooms. Photo by Anna Bayuk

The detectors used in MSD bathrooms. Photo by Anna Bayuk

In the 2019-2020 school year, the number of false fire alarms has been wonderfully low. However, the alarm was recently set off at two incredibly inopportune times: one about twenty minutes before school began, and one only five minutes after it ended. Both alarms were set off by the same thing. Both times, a student was vaping in the bathroom.

Vaping is a common trend among students. Back in 2018, a National Institute on Drug Abuse study showed that 37 percent of 12th graders admitted to vaping. This was a 9 percent rise from the year before. This shows that vaping is still on the rise amongst students. A 2018 survey of Marjory Stoneman Douglas students also showed that 36 percent of MSD students admitted to vaping. The most common substance to vape is nicotine, which is highly addictive. As such, students may often find themselves craving a fix at increasingly inopportune times, even on school grounds.

These students may turn to the bathrooms as a place to vape. This spot is away from the prying eyes of teachers and administrators. Just as students often escape to bathrooms to cry or have panic attacks, they also do so to vape. The bathroom, which obviously doesn’t have cameras, feels like a safe space for these embarrassing or illegal activities.

Though the bathrooms don’t have cameras, administrators may on occasion catch students vaping in bathrooms another way: when they trigger the smoke alarm. Although vaping releases vapor, not smoke, it can still set off these alarms. Smoke alarms detect small, airborne particles, which include those in the vapor from Juul and other e-cigarettes.

When a smoke alarm goes off during school hours at MSD, panic spreads quickly. When the alarm went off in the morning, students fled for the school exits. Immediately, administrators started yelling for everyone to stay where they were; it didn’t help. Similarly, the after-school incident led to students rushing the exits. Those in hallways ducked into classrooms. Memories of the shooting have led to a schoolwide fear of being in the hallway during a fire alarm. As such, the fact that these alarms went off when students were loose and had minimal supervision made a bad situation worse.

These fire alarms were caused by smoke detectors being triggered by students vaping. In order to prevent future occurrences, these bathroom smoke detectors should be replaced with heat detectors, like those in the culinary arts classroom.

Heat detectors, rather than observing particles in the air, are set off when extreme heat is detected. They have a far lower rate of false alarms and would lead to a less anxious student body.

One could argue that the best solution would be for kids to just stop vaping in the bathroom. However, of those 36 percent of MSD students that admitted to vaping back in 2018, 74 percent admitted to vaping on campus. With the current student body size, that would indicate that at least 850 students have vaped on campus.

Smoke detectors are not amazing at detecting vaping, but even though there have only been two incidents so far, with this amount of students vaping, there will almost certainly be another. It would also be incredibly difficult to convince a group of teenagers bigger than the senior class to do anything, particularly to go through withdrawal symptoms during school hours.

As such, the implementation of heat detectors in the bathrooms makes the most sense. Although it would cost money, the school has plenty of willing and able donors. This replacement would save future students from the struggles of retraumatization and panic attacks while on campus, and would overall have a significant net positive impact on the school.