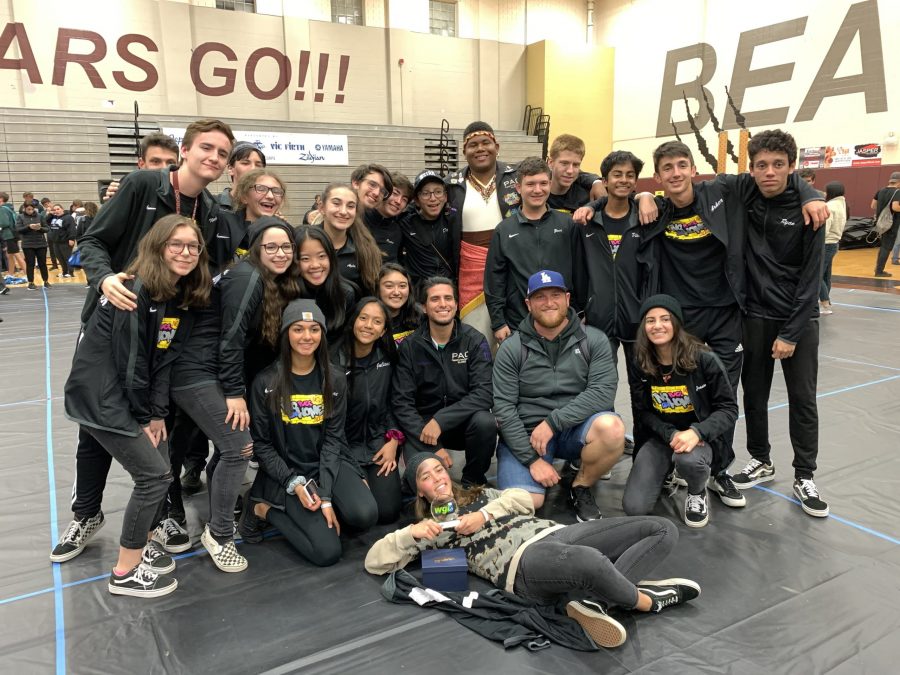 Marjory Stoneman Douglas High School’s Indoor Percussion competed at their second competition of the season, placing fourth place at preliminaries and fifth place at finals in the Scholastic A category, which comprised of a total of six indoor groups. The Winter Guard International Orlando regional was held on Saturday, Feb. 22, at Cypress Creek High School in Orlando, FL.

The battery group rehearses their show in the lot before competition. Photo courtesy of Joanne Wallace

“My first run at the preliminary performance was not up to par for my personal standards, but my finals performance was greatly improved [because of] the hours in between prelims and finals,” junior Darby Rivera said.

Team members were able to watch and interact with internationally acclaimed groups and bands, such as Stryke Percussion And Infinity Percussion. They felt the competition was a good learning experience.

“It was very cool. I think seeing those groups really opens your eyes to how good you can get, especially with all the practice they put in, everything they do, and how hard they work,” battery captain Sophia Pemble said.

This season’s show is titled “No Place Like Home,” a story about how a group of children living on the city streets find their home in each other. Members of the team personally spray painted and drummed on props, like oil barrels and trash cans, and even bought a dumpster previously used in a West Broward High School’s World Guard show.

The percussion ensemble performed three quarters of their entire show, which included their intro, opener, ballad and a snippet of their closer. The group plans on learning the rest of their show this week in preparation for their upcoming competition at Park Vista High School.

The percussion ensemble performs the last few seconds of what they have so far in their show “No Place Like Home.” Photo courtesy of Karen Hart

“[Looking at] the other groups that pushed so well to go from prelims to finals, and just break through with their scores, is very inspiring. This week, it will help during practice to use them as an example,” junior Gabriel Ammirata said.

On Saturday, Feb. 29, MSD’s Indoor Percussion will be participating at one of the many FFCC Percussion Competitions held in the state. The whole-day event will take place at Park Vista High School in Lake Worth, Florida.