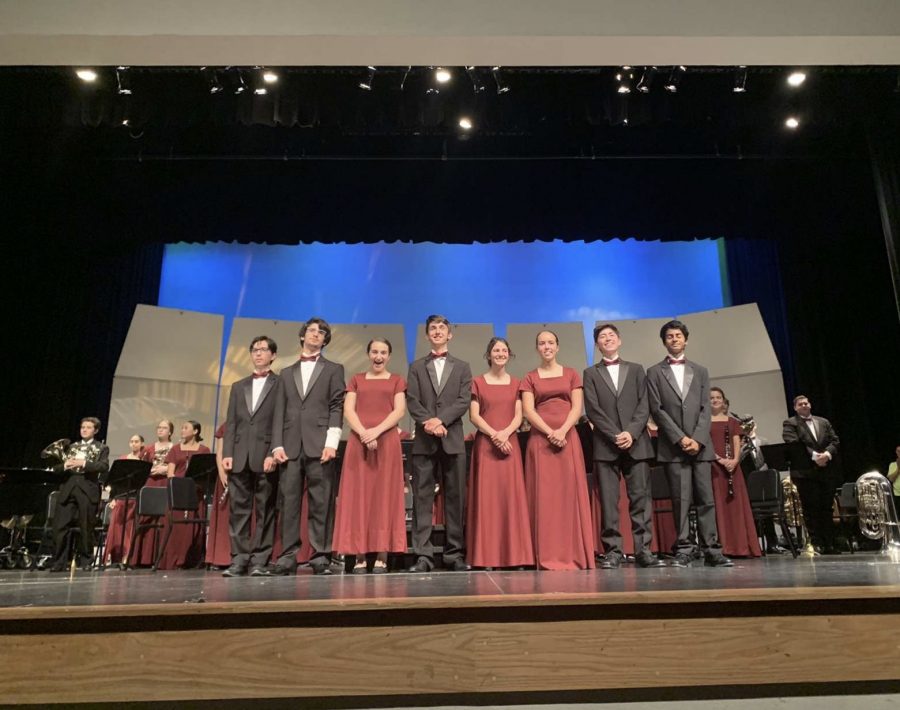 On Tuesday, March 10, Marjory Stoneman Douglas High School’s Eagle Regiment, which consists of the Concert band, the Symphonic band and the Wind Symphony band, attended the district Music Performance Assessment, which was held in the auditorium at Park Vista High School in Lake Worth, Florida.

For this event, all 135 band members met in the MSD band room at 1:10 p.m. in their assigned uniforms, which were long, maroon dresses for the girls and black tuxedos with burgundy bow ties for the boys. They loaded onto the charter buses at 1:30 p.m. and began their trip to Park Vista High School.

“We got there and warmed up, then we practiced a bit, performed, ate dinner and got the opportunity to watch and judge other bands,” sophomore Nicolette Gulla said.

Each MSD band played a total of three songs. The Concert band, which is the least experienced out of the three, was the first out of the MSD bands to perform. They presented their first piece “Unity March” at 4 p.m., followed by “Make Our Gardens Grow,” and lastly “The Lords of Greenwich.” Next to play was the Symphonic band, whose members have a little more experience than the Concert band. They performed at 7 p.m. and their three pieces were entitled, “The Chimes of Liberty,” “One Thousand Cranes” and “Sundance.”

After they commenced their songs, the Wind Symphony, consisting of the most experienced members, performed around two hours later at 9:10 p.m. The exclusive group played three unique pieces entitled, “Der Rosenkavalier,” “Aurora Awakes” and “The Free Lance March.”

“My favorite part was listening to Wind Symphony play. Their tone was excellent and they sounded amazing. You could tell that they really put a lot of time into perfecting their pieces,” sophomore Diogo Ortiz said.

Throughout the day, the band members had the opportunity to watch other high school bands perform. Students also had concessions opened to them where they could purchase snacks to enjoy when they were not playing.

“I enjoyed listening and adjudicating other bands because it really made me see how different some bands can be and [it was] a really fun experience to listen to music,” Gulla said.

The three bands spent weeks preparing for this event by having routine rehearsals weeks in advance. The winds and brass practiced during their band class and would meet with the percussion for ensemble rehearsal on Wednesdays after school. The band director Steve Rivero and his son Robert Rivero helped students prepare for these weekly rehearsals by providing them with a long detailed schedule of the weeks to come in advance.

“Some days we would split up into sectionals and then go back into a full ensemble, which really helped us improve individually and as an ensemble,” Ortiz said.

The district MPA is a musical performance in which students are evaluated on specific criteria.

MPA is about how the band sounds and whether or not their performance captures the spirit and intent of the music. The bands are graded based on these factors and each piece is specifically chosen according to each band’s ability.