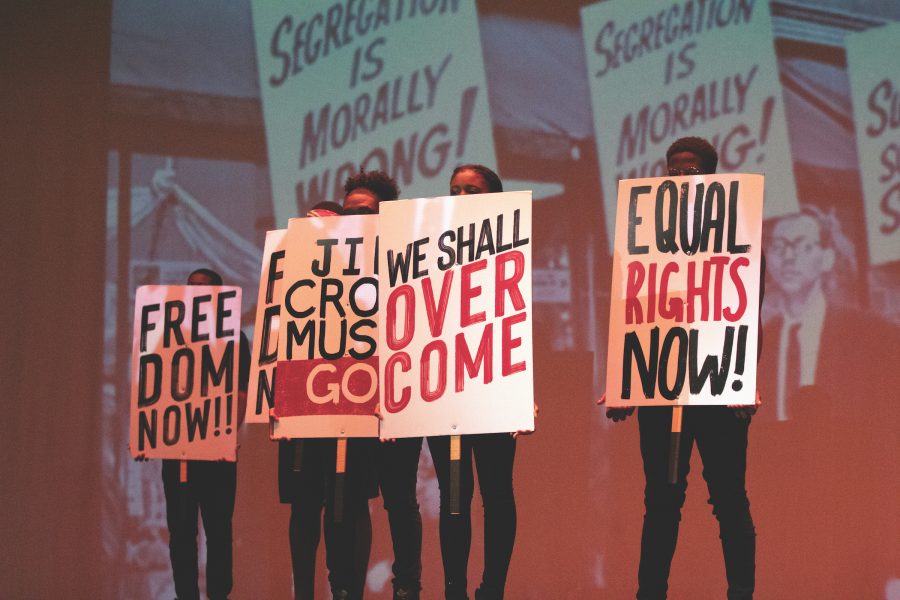 Speaking Up. Performers hold up signs depicting the African American civil rights movement during the annual Black History Month show. All the signs were handmade by the students in the show. Photo by Lizzie Sheehy

Performers hold up signs depicting the African American civil rights movement during the annual Black History Month show. All the signs were handmade by the students in the show. Photo by Lizzie Sheehy

“I wanted to educate and entertain the students and teachers at Douglas about our culture and what we go through as African Americans,” Bosfield said.

Kent State University held the first commemoration of Black History Month from Jan. 2, 1970 to Feb. 28, 1970. It was originally referred to as Black History Week. However, in 1976, President Gerald Ford formally selected February to be the month to honor black history in the United States. Black History Month recognizes African American achievements and accomplishments.

The Black History Month Show at MSD celebrated the history of African American people and events through educational slides, speeches, dances and songs. Participants rehearsed for the show every day starting in January, and students of all races were encouraged to participate.

Dance is strongly connected to African American culture. For the show, students choreographed African, New Edition, Caribbean and Contemporary routines. They served as a method for African American students to express their various cultures.

Performing students also expressed themselves through songs. Junior Hayley Betancourt performed “I Have Nothing” by White Houston, and senior Jiselle Caminero performed “Man in the Mirror” by Michael Jackson.

There were about 50 students that participated in the show, including the technical theater students working backstage. Those involved hoped the audience learned something about African American history and culture and obtained a better understanding of African Americans experiences, such as discrimination and racism. One of the main intentions of the show was to spread awareness about these issues.

“I believe that it’s super important for people to be at the show because throughout the show, we talk about our struggles of being black and how people knowingly or unknowingly participate in them and how it affects us. Also, we want people to be more educated on our history and culture,” Gabriel said. “What we wanted people to leave with watching the show, is a deeper understanding of why we celebrate Black History Month.”

The Black History Month Show highlighted the contributions of African Americans throughout history and emphasized the importance of remembering and educating students on African American cultures.