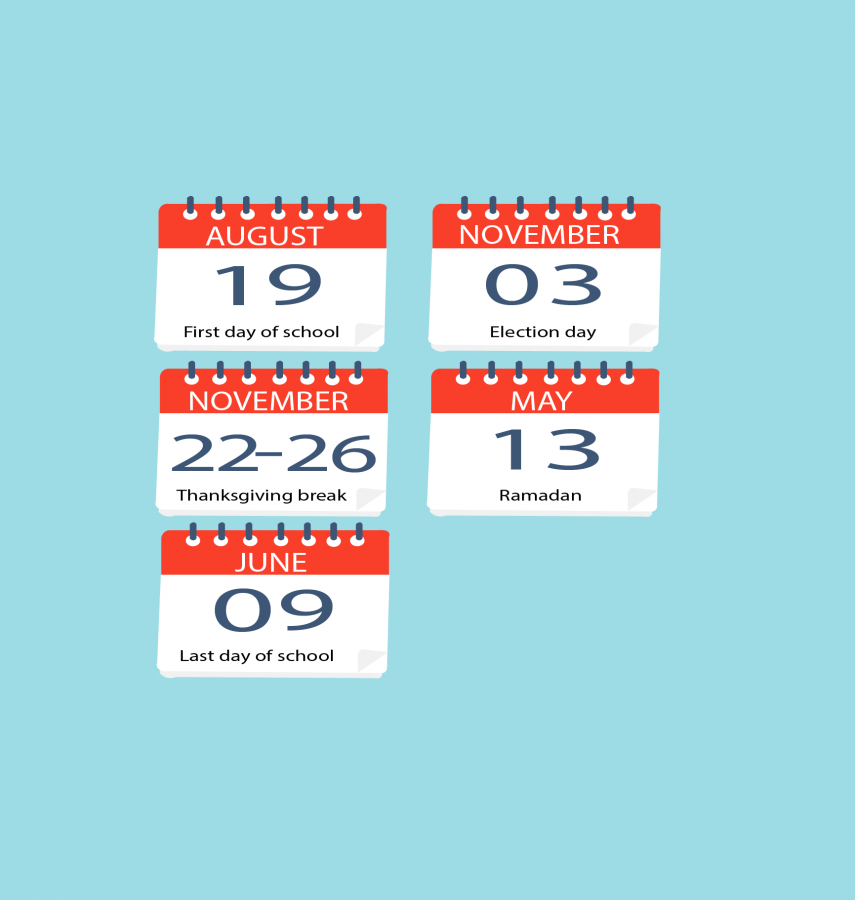 Broward County Public Schools released the new school calendar for the 2020-2021 school year with various changes. The calendar details a later start date, the last day of the Muslim holiday of Ramadan off and a week-long Thanksgiving break. Graphic by Brianna Jesionowski

The Broward County School Board approved a new school calendar for the 2020-2021 school year with some notable changes. The calendar includes a five-day Thanksgiving break, and it also adds a day off on May 13 for the last day of Ramadan, a Muslim holiday.

In previous years, as well as the current school year, students and staff were only granted Wednesday through Friday off during the Thanksgiving break week. Next year will be the first instance where Broward County Public Schools has approved a five-day Thanksgiving vacation.

“I personally love the week-long break. Thanksgiving is a big deal in my family, so I am either traveling or having lots of people over during that time,” freshman Kate Becker said. “It’s much more relaxing now since I will be able to spend more time with my family and not have to rush home.”

The calendar was designed by a committee made up of various representatives that the district picked, but was also open to the public for people who were interested in serving. The meetings were held once a month in the board room of the Kathleen C. Wright Administration Building.

In order to obtain public input, the calendar committee produced an online poll for students, teachers, administrators and parents in the district to pick their favorite calendar for the next school year. The respondents had to answer if they were a teacher, parent, student, administrator or other before being able to choose from three separate plans for the 2020-2021 calendar.

The three plans had some differences with one schedule opting for the first day of school on Aug. 24 while the other two plans opted for an Aug. 19 start date.

The Broward Teachers Union was in strong support of the second plan, Option 2A, which detailed the prolonged Thanksgiving break and later start date. The union is made up of over 11,500 teachers, paraprofessionals and technical service professionals and is headed by President Anna Fusco.

“It was definitely one of the most positive responses we had on the calendar in a long time. I really think it’s because of a longer break,” Fusco said.

The committee also declared May 13, 2021, as a day off if there are no national testing conflicts. May 13 marks Eid al-Fitr, the last day of the month-long fast for the Muslim holiday Ramadan which involves prayer, reflection and community.

“I feel very grateful that the last day of Ramadan is finally off. Every single year when Eid was during school, I would miss my traditional celebration, that only happens twice a year, to attend school, so I don’t miss my work,” freshman Aisha Bashir said. “Because of this, I lost much needed quality time with friends and family at my mosque. Knowing now that Muslims have the opportunity to not miss a school day to celebrate their Eid day is wonderful.”

According to a study conducted by the Council on American Islamic Relations, there are currently 17,721 Muslims under the age of 18 living within the confines of Broward County.

Another recent poll, conducted by Emerge USA, found that 89% of Muslim, Arab-American and South Asian Broward residents keep their children home from school on these Muslim holidays.

“This day should’ve been off a long time ago because all races deserve to have a special and traditional day off, even Muslims,” Bashir said. “Although I would’ve liked the last day of Ramadan to be off a long time ago, I still think it’s fair that we have this day off now.”

Muslim students, parents and teachers made their voices heard at a board meeting on Oct. 22, 2019, in support of having the school day off. Some attendees described the struggle of having to choose between school and celebrating their holiday. The day is marked with an asterisk because May is the start of national testing and there could potentially be a conflict with the dates.

“Since we are one of the largest districts in the country, we pay for the testing. We can ask for another date for students to take testing, but we had a lot of push back from parents. I think they’re afraid that their kids won’t be able to do it or make it up,” Fusco said. “Our Muslim population is large, and the students want to be able to respectfully honor their tradition and religion, and you know they’re not going to take off school.”

In addition to the extended break, the recently developed schedule pushes the first day of school back five days from Aug. 14 to Aug. 19. As a result, the last day of school will be moved back to June 9 while this school year will end on June 2.

School start dates are all chosen around the state-mandated testing. This means that the opening day must be based around when the testing is at the end of the year, as testing has to be done within a certain time frame before the year concludes.

While no school calendar is ideal for working parents, the 2020-2021 schedule starts on a Wednesday, making it hard for parents to find childcare as most camps are for one week, not two days. The elongated Thanksgiving break also adds two days where parents will need to organize something for their children.

“I’m not worried about child care because I know that camps and other businesses will tailor their schedules to the school calendar,” Robbins said. “Actually, I love the week-long Thanksgiving break because many students miss that Monday and Tuesday anyway due to travel plans. Many students are mentally on vacation for those two days even if they are in attendance.”

While the calendar contained various noteworthy changes, many elements to the calendar remained unchanged, like a two-week winter break, a week-long spring break and one day off for Election Day.