Two years after the March for Our Lives, MSD students have experienced a lack of political efficacy 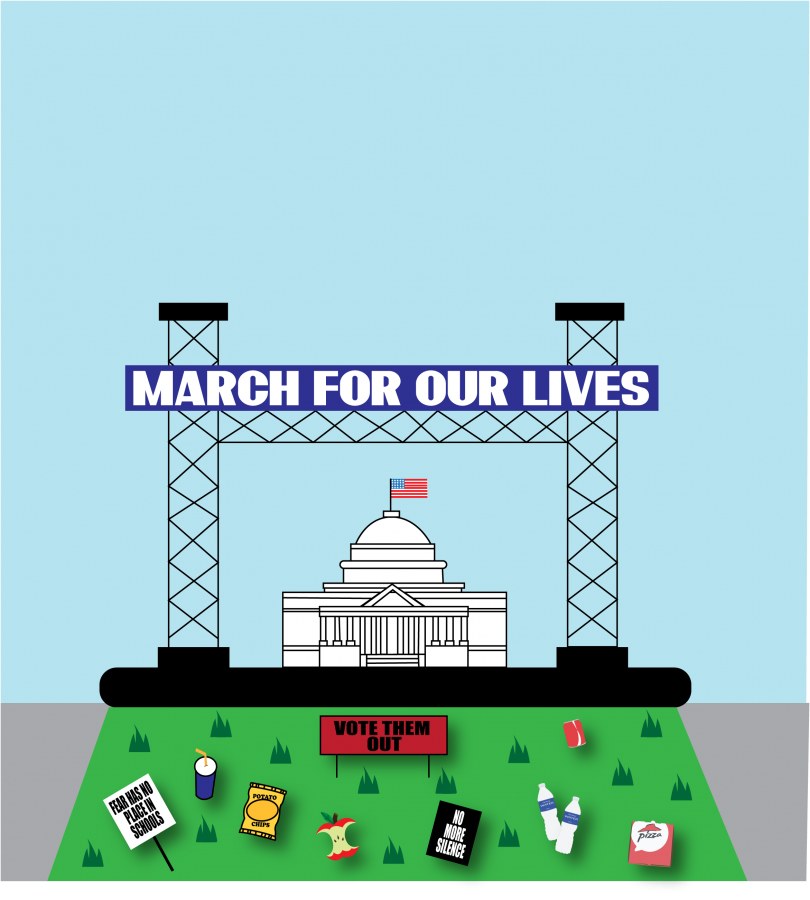 Teachers and students alike became active. The sadness and confusion of a tragedy spread through the community. Feelings of despair quickly turned to feelings of anger and injustice directed at an inactive congress in regards to gun violence prevention legislation.

March For Our Lives (MFOL) was the culmination of this collective evolution. Set directly in front of the United States Capitol building, approximately 200,000 students chanted, sang, screamed and raised their fists high to end the cycle of gun violence in America.

These 200,000 were accompanied by over one million other protesters who attended sister marches across the nation, making the event one of the largest mass protests in U.S. history.

However since this eminent mass demonstration, the morale of this movement has declined greatly.

“Frankly, a lot of people don’t care anymore which is pretty disappointing to me,” sophomore and Parkland MFOL organizer Logan Rubenstein said. “I respect that a lot of people just don’t want to deal with it anymore, but gun violence continues to happen every day, and I’m going to continue fighting to prevent it.”

In an attempt to spread the message of youth activism, members of the organization went on a national “Road to Change” tour and started over a hundred chapters across the country, yet MSD did not experience this same degree of activism.

“It’s not like it was right after the march,” junior Sam Deitsch said. “We’re more aware of the problems, but I think things have died down when it comes to the school community being active.”

The Eagle Eye surveyed 375 current MSD students about their prior and current levels of activism on the issue of gun violence, defined by their involvement in various organizations like  MFOL, Students Demand Action, the Brady Campaign, etc. Among students that were enrolled at MSD at the time of the shooting, activism has declined from 57% to 28%. Among students who were not enrolled at MSD, involvement has dropped from 47% to 20%.

This is not to say that MFOL and organizations like it do not have a presence at MSD and in the larger Parkland community. As previously mentioned, MFOL has an active Parkland based chapter that is open to MSD students.

“In August, we held the Walmart ‘Must Act’ rally with 100 people showing, tabled at community events and pledged over 150 people to vote in the 2020 election,” Rubenstein said.

MSD has also contributed to the organizations, Change the Ref and Make Our Schools Safe, through the addition of new chapters at the school.

While students may be less active on the issue of gun violence prevention, the issue is still a prominent concern among the student body. The Eagle Eye’s student survey found that 82.3% of respondents ranked the issue as a 7 or higher on a 1 to 10 scale of importance, with 1 being not very important, and 10 being very important.

It seems that, while the student body itself is still committed to the issue of gun violence, it is no longer the active force that it once was.

“Other students definitely have mixed opinions on the movement and aren’t as active as they used to be,” MFOL content creator Daniel Duff said. “Everything just kind of died down in a way, which I get. I’m pro-action, but I understand how as a student, it’s harder to be committing your time to that sort of thing.”

Whether it be the decline of publicity from the media, the lack of attention on younger activists or merely the exhaustion for fighting for ideas that are too complicated to be altered, activism is less prevalent at MSD.

“Everyone I knew was either involved in March For Our Lives or very active on social media,” junior Jessica Virk said. “However, it was so exhausting to keep up with, that we all burned out.”

On the other hand, there are MSD students that still have the drive and the plans to continue advocating for this issue in the future.

“I spoke at the march in New York City, and was really passionate about solving the issue of gun violence,” senior Sam Hendler said. “I still believe that we should continue advocating to stop gun violence all across the world, but as two years pass, I haven’t had time to focus and participate. Deciding on college takes a lot of energy, but I hope to continue advocating in the near future.”

With a culture of activism on the decline, some students see the fight for common-sense gun reform as one of the past.

“They (MFOL) had a good run, but they stopped doing anything,” junior Bryce Albert said. “They were a one-hit-wonder; they changed like one law and left us behind.”

For many students, the activism and the march played a huge role in their high school experience; yet now, despite large ideological support, the student body at MSD has lost the culture of action.