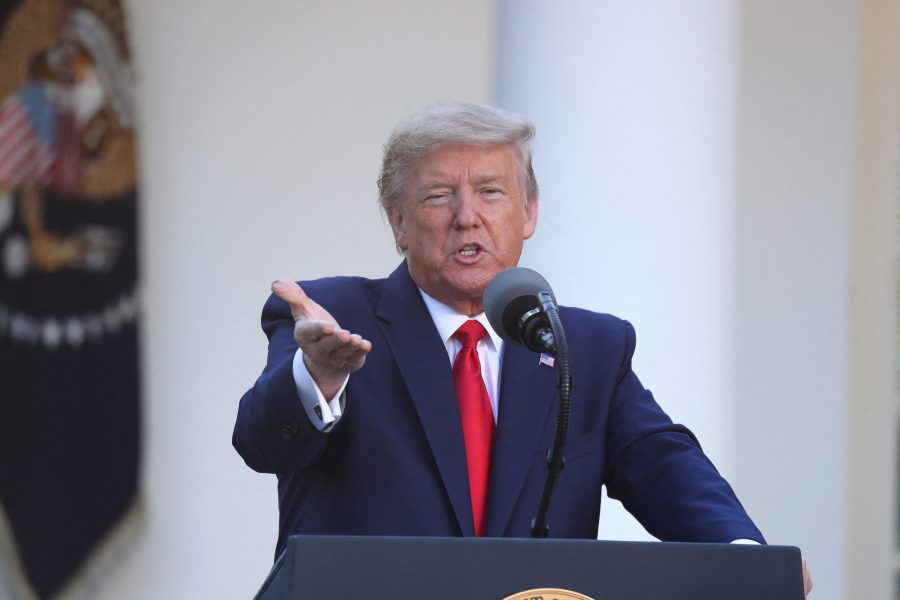 U.S. President Donald J. Trump speaks during the Coronavirus Task Force press briefing on the coronavirus and COVID-19 pandemic, on Monday, March 30, 2020 in the Rose Garden at the White House, in Washington, D.C. (Pool/Abaca Press/TNS)

U.S. President Donald J. Trump speaks during the Coronavirus Task Force press briefing on the coronavirus and COVID-19 pandemic, on Monday, March 30, 2020 in the Rose Garden at the White House, in Washington, D.C. Photo courtesy of Pool/Abaca Press/TNS

On Mar. 20, President Trump held a coronavirus press conference where he lashed out at NBC reporter Peter Alexander over a question concerning what he would tell the Americans who feel scared right now.

Trump’s response was in severely poor taste, especially at such a contentious time in history. The president’s job is to lead the country to a safe and better solution. Instead, Trump is more concerned with his reelection and less concerned about the state of the country.

The president’s relationship to the press has never been a friendly one. Any news organization that speaks ill of him receives scorn and nicknames such as “Fake News CNN,” “ConCast” and “The Failing New York Times.” While this is often cause for concern enough, this attitude in our current climate is very dangerous.

While to many this seems like some horrifying sci-fi novel becoming reality, President Trump seems to be content with what he is doing. He has continually downplayed the situation, pushing the “miracle cure” of the antimalarial drug hydroxychloroquine just so he can be seen as handling the situation well. His goal isn’t to save the American people; it’s to appease them long enough for them to cast a ballot.

President Trump has horribly mishandled his press interactions throughout this contentious time. Instead of being a leader, Trump wants to be a hero who vanquishes his foes. If he would look beyond himself for even a brief second, he would see that treating the press like fodder for his snappy nicknames and rude remarks is only destroying the America he supposedly holds dear.