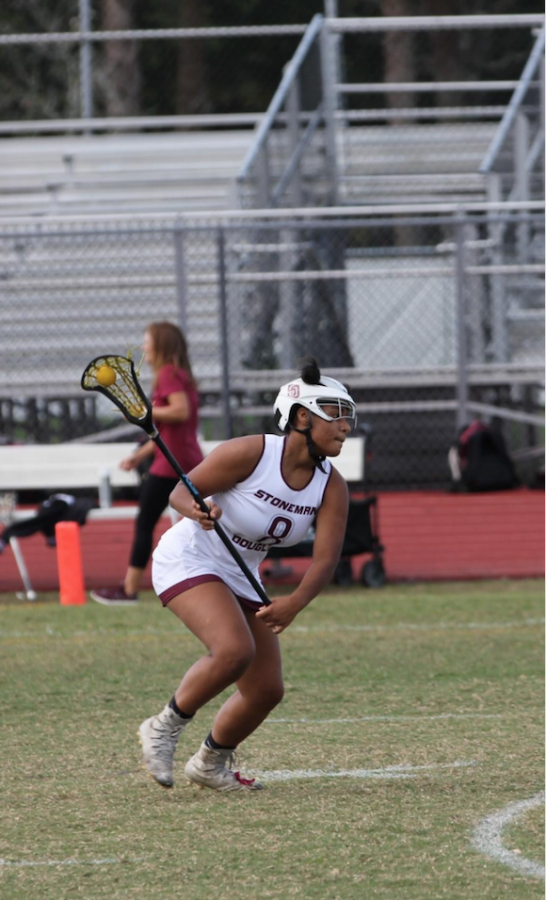 Chantal Jimenez, a senior at Marjory Stoneman High School and the captain of the MSD women’s varsity lacrosse team, has been selected as April’s Athlete of the Month. Jimenez was born in Brooklyn, New York, and lived there until she moved to Parkland, Florida at 12 years old.

Before lacrosse, Jimenez played many other sports, including soccer, basketball, gymnastics, cheerleading and dance. She began her lacrosse career when she moved to Florida in sixth grade, as a part of the Westglades Middle School team.

“When I moved down here, I wasn’t sure about what I wanted to do,” Jimenez said. “We ran into some people that were starting up a lacrosse program at Westglades, and ever since I loved it.”

Outside of school lacrosse, Jimenez has been committed to several travel lacrosse programs. Currently, she plays for LaxManiax, which is a national recruiting club that allows players to showcase their talents to college scouts. Prior to her dedication to LaxManiax, she played for Stickbenders Lacrosse for two years.

After years of hard work and dedication to both her club and school teams, Jimenez verbally committed to play Division II lacrosse at Indiana University of Pennsylvania in her junior year. On Wednesday, Feb. 5, Jimenez officially committed to IUP on National Signing Day.

“The process of being recruited was long and frustrating,” Jimenez said.“I traveled every summer since freshman year until junior year and played lacrosse all year long to get ready for colleges to call and email me.”

Lacrosse has become a major part of Jimenez’s life for eight years. She believes the sport has changed her for the better and taught her how to overcome many challenges in life.

“Being Afro-Latina, playing a predominantly white sport was difficult, especially because I came into the game super late,” Jimenez said. “When I started playing, I wasn’t very good and I stood out. I hated it because everyone would stare. However, I worked hard after every practice to catch on the years I missed and to be the best lacrosse player I can be.”

Outside of practice, Jimenez works on her lacrosse skills by doing wall-ball routines and exercising.

This school year, which was Jimenez’s fourth and final high school season, she was chosen to be a captain for the MSD women’s varsity lacrosse team. Before each game, she listens to music with her team to boost her energy and writes down three things she wants to accomplish during the game on a piece of paper. Jimenez’s coaches help guide her into leading the team as a captain, to the best of her abilities.

“Chantal is very determined. She runs at 110% and expects her teammates to do the same. She also wants to have fun and work hard,” MSD women’s lacrosse coach Kristina Stein said. “She raises the bar for her teammates and always wants them to compete at their highest level.”

Besides playing lacrosse and working hard in school, Jimenez has volunteered at Save Our Souls Village for the past four years. In her free time, she also trains kids in lacrosse at AMB Athletics.

As the team was approaching districts, the MSD women’s lacrosse season was cancelled due to the coronavirus outbreak. Unfortunately, Jimenez’s last season was cut short, along with many other spring athletes. She was devastated, but overtime, Jimenez overcame and accepted this hardship.

“I was super sad because as an athlete, that’s all we look forward to since training for season,” Jimenez said. “However, throughout this time at home, I’ve come to realize that this is a great example of life, and how things never go to plan.”

Even though her lacrosse season has ended, Jimenez is excited to start a new chapter in her life as a freshman in college and to play lacrosse at a higher level.