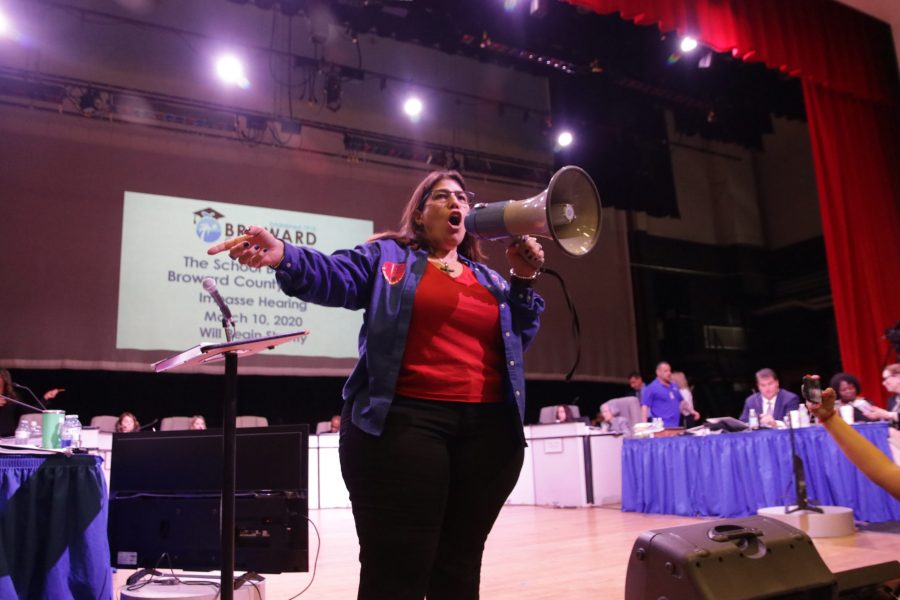 President of the Broward Teachers Union, Anna Fusco, addresses the BTU members at the latest Impasse meeting which took place on March 10, 2020. Photo by Darian Williams

For the first time ever, Broward County Public School teachers are casting their ballots online this week to vote to either accept or reject changes to their contract amid the COVID-19 pandemic. The ratification vote comes after months of tension, failed negotiations and a final impasse meeting between Broward County Public Schools and the Broward Teachers Union. At the center of the debate is the proposed raise for teachers.

Teacher contract negotiations began in August 2019, but by December 2019, the BTU negotiations team declared an impasse, which means the two sides were unable to come to an agreement or were unwilling to compromise further.

In Florida, when an impasse is declared, the dispute goes before a special magistrate who makes a non-binding recommendation to the Broward County Public School Board members. These members are supposed to act as a panel of unbiased judges to settle the dispute. This time, the parties chose to skip the special magistrate and go straight to the school board for a resolution.

“I went to the meeting because this is important. The district continuously shows that they do not value their teachers with these small raises and ‘I can’t find the money,’” Marino said. “They need to see our faces. The faces of the people they cheat. And the board needed to see how much we care. They needed to see us and how we feel and understand the job we do every day. We don’t ask for much. But we ask for our raises. The meeting was incredible. There were upset and angry and unappreciated teachers but it was so much more than that. It was comradery. Standing with your fellow man. We didn’t know everyone there, but we did. We stood together and said ‘This is not okay.’ It was emotional at times for me.”

At the meeting, both sides spoke, representatives from BCPS and the BTU, and then each side was given the chance to rebut. After a full night of going back and forth, the meeting reached its conclusion well after midnight.

“I was not happy with the conclusion and end result. I am proud of us for standing together, but it is disheartening when the people who decide your life can’t see you and all that you do,” Marino said. “We work so hard as teachers. We are asked to do so much for these kids. And we do it because we love our kids and if not us, then who? But it is so discouraging when the people who can make a decision that will make your life just a little bit easier, choose to not help.”

The BTU asked for a 5% raise for teachers in addition to a change in language for annual contract teachers. The union’s representatives argued that every time BCPS has a budgetary surplus, they move the money within the budget to all other items except for employee raises and that their budgetary priority should be for their employees. BTU representatives also argued that teachers are grossly underpaid.

District representatives countered with a 2% raise, explaining that there is no surplus in the budget and blaming the Florida Legislature for failing to fund public schools. At one point, Broward County Public Schools CFO Judy Martell explained that the county could not commit to a higher raise because they could not foresee the economic outcome of the COVID-19 pandemic.

Broward Teacher Union member screaming based on something being said at the meeting. Photo by Darian Williams.

After midnight, the school board reached its ultimate conclusion, which is final. In a 6-3 vote, the school board sided with BCPS district representatives and approved a 2% raise for teachers to be retroactively paid from July 1, 2019. School board members Ann Murray, Patti Good, Heather Brinkworth, Laurie Rich Levinson, Donna Korn and Rosalind Osgood voted to approve the 2%. School board members Lori Alhadeff, Robin Bartleman and Nora Ruport voted against the 2% in the hopes of reaching a higher percentage raise for teachers.

“The conclusion of the meeting was disappointing,” Falkowski said. “Teachers deserve more than a 2% raise. Inflation rates each year are 3%. Our salaries aren’t even keeping pace with inflation. Unfortunately, the way the laws are written in Florida, the deck is stacked against us. We can’t strike, and based on a bizarre Florida law, our employer gets to pretend to be a panel of impartial judges that ultimately decide our fate when negotiations break down. It makes a lot of teachers angry, year after year.”

Contract ratification voting for teachers began on Monday, April 13 and was originally scheduled to end on Wednesday, April 15 at 7 p.m. The process has been slow, as some teachers had to wait multiple days to receive their ballot in their email inbox. Voting has been extended to 5 p.m. on Friday, April 17.

“My online voting experience was a little frustrating,” MSD English teacher Andrea Kowalski-Rospierski said. “I did not get my ballot right away due to a glitch or delay in the system. I had to email the BTU three times, but eventually, I got my ballot and was able to cast my vote.”

The union faced technical difficulties, as their newly rolled out voting system sent email voting links and access codes to the 14,700 teachers working for BCPS.

All proposed changes come as a package deal, which teachers must either accept or reject entirely with a “yes” or a “no” vote. In order for the changes to the contract to be ratified, 50% +1 votes would have to be in favor of approving the changes. It is based on the total number of teachers that participate in the vote.  The proposed changes are:

All MSD teachers would be eligible for the Best and Brightest money proposed.

Some teachers have decided to vote “no,” citing their principles and the fact that they believe that teachers deserved a better raise.

“I think its become incredibly apparent that the teachers are the backbone of any school. Great teachers equate to a great school. But unfortunately, that doesn’t mean that we have been financially valued,”  MSD TV Production teacher Eric Garner said. “This isn’t a one time moment, it’s a ‘hit play and repeat’ moment. A way of looking at it is – if you want to know what you value, look at your bank statement. If teachers are the most valuable asset in a school system, then they should be compensated as such. When the budget comes around, teachers are decided first. We are nine months into this budget year and still just voted on a raise. Always look at peoples’ actions more than their words, so 2% doesn’t even cover cost of living. We are a path that we are somehow accepting that it’s ok to walk backwards, so I said no. Show us you value us. Put us first.”

If the majority of teachers vote “no,” the Broward County School Board will ultimately decide the raises of teachers.

“I’m encouraging all teachers to vote ‘yes” and take this raise, even though it is far lower than what teachers deserve,” Falkowski said. “We absolutely deserve more. However, the last time there was a recession, teachers didn’t receive a raise for more than 5 years. Due to the uncertain economic times ahead of us right now with COVID-19, we should take this raise, and then be prepared to fight for another raise next year.”

Teacher contract negotiations for the 2020-2021 school year should begin in August 2020.