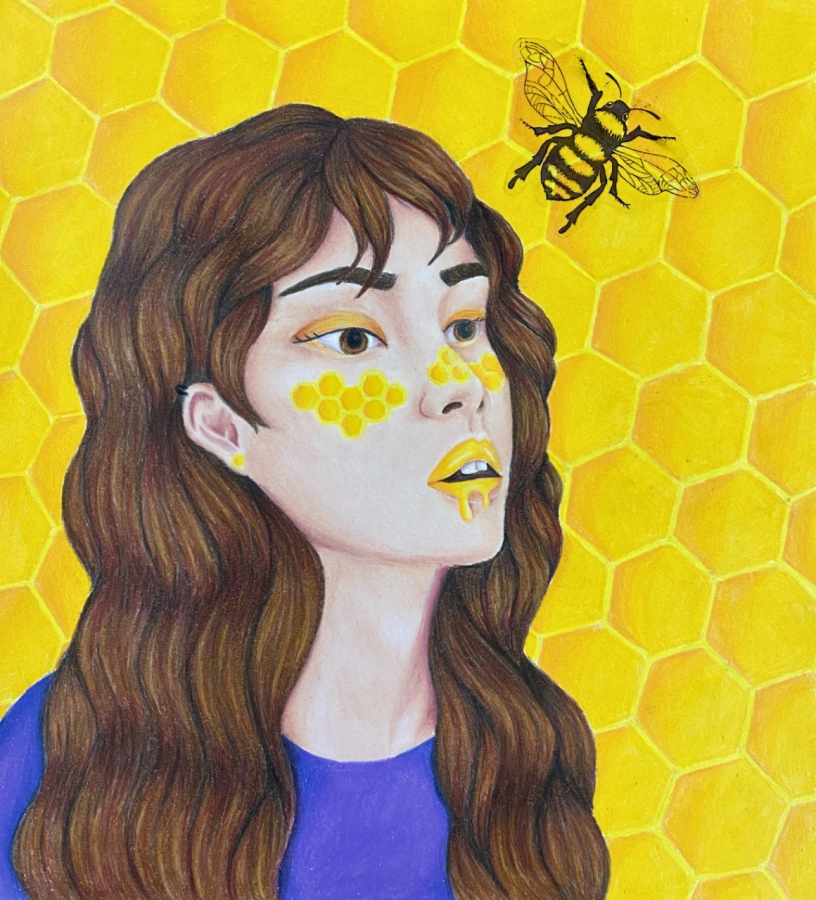 Junior Christine Yared was selected as an eARTh Day Art Contest finalist with a painting featuring a girl in a honeycomb. The inspiration behind the piece comes from pervious sketches and the bees population decrease. Photo courtesy of Christine Yared

Junior Christine Yared was selected as an eARTh Day Art Contest finalist with a painting featuring a girl in a honeycomb. The inspiration behind the piece comes from pervious sketches and the bees population decrease. Photo courtesy of Christine Yared

With Earth Day around the corner, Local 10 News has decided to host its third annual eARTh Day Art Contest, in which any student from a Monroe, Miami-Dade or Broward County school is eligible to participate in. One student per school is allowed to submit a photo of either a sculpture or painting.

Each participant must create an art piece with an environmental theme in honor of Earth Day on April 22. The winner of the contest will win a total of $4,500 for their school’s art program. The student’s school will also be featured on Local 10 News.

In order to enter, the art teachers from each school must complete an entry form and submit their student’s artwork online to Local10.com. The submission deadline was 11:59 p.m. on Monday, March 9. Christine Yared, a junior at Marjory Stoneman Douglas High School, has been selected as one of ten finalists chosen by the Local 10 news channel.

For Yared’s submission, she created a portrait of a woman with a honeycomb makeup look, along with a matching background. Yared was inspired to do the piece by a doodle of a bee she had done in the past. She realized bees would be the perfect topic to base the artwork on due to their importance and current endangerment.

“[Honey Bees] are an essential part in the ecosystem and human life, especially as bee populations are decreasing,” Yared said. “Humans could not exist without the work that bees do in pollinating the earth.”

Yared believes Earth Day serves as an essential reminder to people to appreciate and support the well-being of their Earth and its environment.

“I think Earth Day is important; we tend to overlook the planet and treat it poorly, so having a day dedicated to its care and conservation is important to remind people to take care of the earth,” Yared said.

Yared has been practicing art for as long as she can remember, and has been taking it more seriously since the sixth grade. She has been taking art at MSD since freshman year and believes that taking the class has truly improved her skills as an artist.

“[Art class has] made me push outside of my boundaries as an artist and forced me to be more creative and productive,” Yared said.

Jacquelene Lieberman, the 2D Studio Art 3 Honors teacher at MSD, has been teaching Yared this school year. Throughout her time in the class, she has seen Yared grow as an artist. Lieberman heard about the contest and encouraged Yared to enter due to her extreme talent in the field.

“​I’m so proud of Christine for being selected as a finalist for this contest,” Lieberman said. “She is very deserving of winning the Channel 10 Earth Day contest. Her artistic talents are exceptional.”