COVID-19 proves to be a challenging adjustment for families 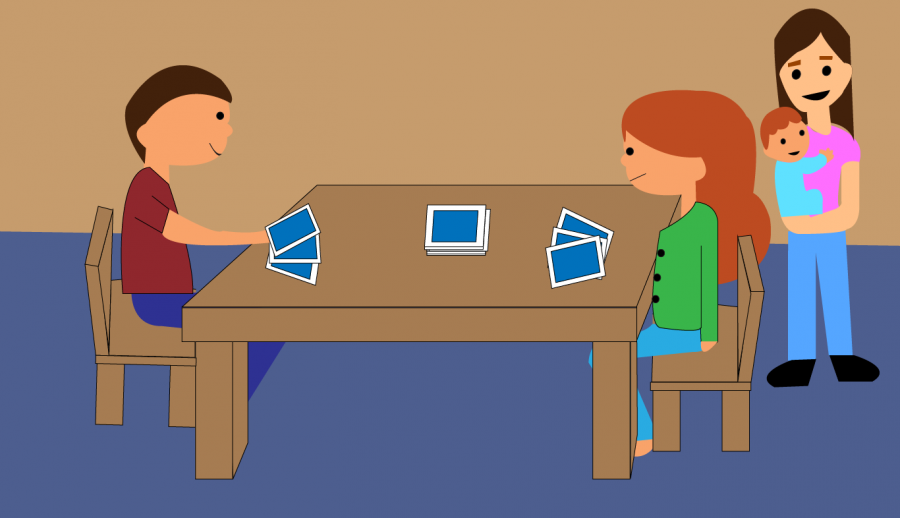 Families have gone about their quarantine routine in different ways. Some families try to spend time together where others may choose not to. Graphic by Brianna Jesionowski

Between families who make TikToks together, to those who do not even talk to one another, each household is handling their time in quarantine  differently.

Dealing with a loss of freedom and missing their separate lives away from home can be a hard adjustment for most. It’s easy to feel confined when stuck at home all day, no matter the size of the house. It’s especially hard fir kids who have to be quarantined in separate rooms because they are at risk of getting COVID-19 or are dealing with siblings who had to come home from college.  Even with all the activities online such as online workout videos, art tutorials and completing schoolwork, it’s hard not to fall into a mundane routine.

With recent news, social distancing is encouraged and mandated around the world. Many states and countries are also on lockdown to lower the curve of COVID-19 cases. With children out of school and many parents working from home, this is a large change for most families. This generation is lucky to have multiple communication platforms at their disposal such as Snapchat, Instagram, TikTok, Facetime, etc. However, the lack of human interaction outside of those people live with is proven to be a challenge for relationships everywhere.

Social distancing is impacting children and teens’ freedom in most  households. Seema Alayoubi, a junior at Marjory Stoneman Douglas High School has been quarantining with her family, which consists of her older brother and sister.

“[My parents are] very strict with social distancing,” Alayoubi said. “I didn’t even bother asking if I could hang out with my friends because I know they’ll say no. Every time we go to a public place, we have to wear a mask and gloves.”

Alayoubi’s family is doing all they can to ensure that they can be safe during this pandemic.

“Since my dad is a doctor, we have been taking every precaution. He also advises us to distance ourselves from him since he is going to the hospital everyday,” Alayoubi said. “My parents have also been wiping every single thing we got from grocery stores and takeout boxes. We also have to shower and wash our clothes every time we leave the house.”

Alayoubi expresses her concern for her father. While she knows he is taking as many precautions as he can, it still worries her that he is continuously going out, whether it is the grocery store or work. Those concerns especially intensify because of his closeness to the virus when working at the hospital.

Alayhoubi’s older sister is dealing with the harsh reality of her husband being in daily contact with COVID-19 patients, as he too works in the medical field.

While trying to keep one another safe, it is still easy to lash out when in tight quarters.

“I’d say [my family relationship] is getting worse, since we’re all stuck together and all we have been doing is arguing,”Alayhoubi said. “It’s different this time because I don’t have anyone to talk to in person except my older brother.”

She hopes that by the end quarantine, they all walk away more appreciative and grateful of the outside world. She also knows that once coronavirus is over, they will all be spending more time with those they care about outside of their immediate family.

Alayoubi has found herself falling into a difficult routine since she believes there are not a lot of activities to keep her busy at home.

“I told myself I would establish a new and organized routine, but my routine is actually waking up at 1 p.m., going on my phone, watching netflix, talking to my friends, finishing assignments, and going to bed at 5 a.m.”

Trying to curb said sleeping habit, Alayoubi’s mother has been taking her computer out of her room. She even implemented a Facetime rule, in which when the computer is out of the room it’s the end of talking to friends for the night. Essentially her mother wants her to get into a better routine so she will be better prepared and awake for her zoom classes. This has been the cause of many arguments in their house since quarantine started.

For those staying updated on the news, it is known that COVID-19 is especially deadly to those in an older age group those with pre-existing medical conditions.

Karlie Russell, a junior at MSD is quarantined with her parents and her father is diabetic.

“My dad is the one taking it most seriously because he has a suppressed immune system. They aren’t really that strict just because I can’t go out anyways so I don’t even bother asking unless it’s going through a drive through which they’re okay with,” Russell said.

Russell’s family has been taking normal quarantine precautions and following their daily routines to the best of their ability. While her dad has a suppressed immune system, they all try to make sure he does not feel isolated from the family or get treated any differently than usual.

Russell’s mother works in human resources and has recently made the transition of working at home. Rusells’s dad on the other hand, has continued going to work as a master electrician and is now considered a first responder, which is a change due to the virus. Russell thinks that her father should not be a first responder; he’s never been one for his job, so it seems unusual and she doesn’t think someone with his condition should be put to that task right now.

Many families are waiting for quarantine to end to get back to their normal lives and when it comes to waiting it looks like the world is in it for the long haul.

“We used to have stuff to do and now we don’t know what to do with our lives,” Russell said. “[After quarantine her family] will be a lot happier when we’re able to actually go out and do things…staying home is not ideal at all for us.”

When it comes to struggling with a new routine, many parents who have younger children believe they have their work cut out for them. Dealing with that pressure is Jonna Harris, a mother who has two sons at ages 11 and 14.

Harris’s kids have already set up their separate study areas to make it easier for online learning. She describes her kids as fairly active. So, trying to keep them entertained and enthused, especially outside, has been heightened.

“It hasn’t been too bad. I try to keep them entertained from after school until bedtime,” Harris said.

To keep their boredom at bay, Harris has been doing batting practice in the backyard, swimming in their pool, and taking family bike rides on the reservoir.

To try to include the whole family she reached out to the children’s grandmother and has been making family Zoom calls a few times a week.

“The Zoom calls have been great. I can tell she is really missing them, especially seeing them,” Harris said.

As a parent she’s trying to keep everything as normal as possible for her kids and make the most seamless transition to quarantine life for them.

“I’ve tried to stick with my normal routine, but there’s definitely a lot more cooking and cleaning. My kitchen is always dirty,” Harris said. All in all, their family is seemingly successful in making the best out of a bad situation.

Whether it’s dealing with the adjustment of 24/7 family time, having a loved one as a medical professional or taking precautions for those who have a pre-existing condition, every family is dealing with the harsh realities of quarantined life. Some things people can do is to try to stay informed, take any precautions available, to try to stay entertained during this waiting period, and to make the best out of the current living situation.