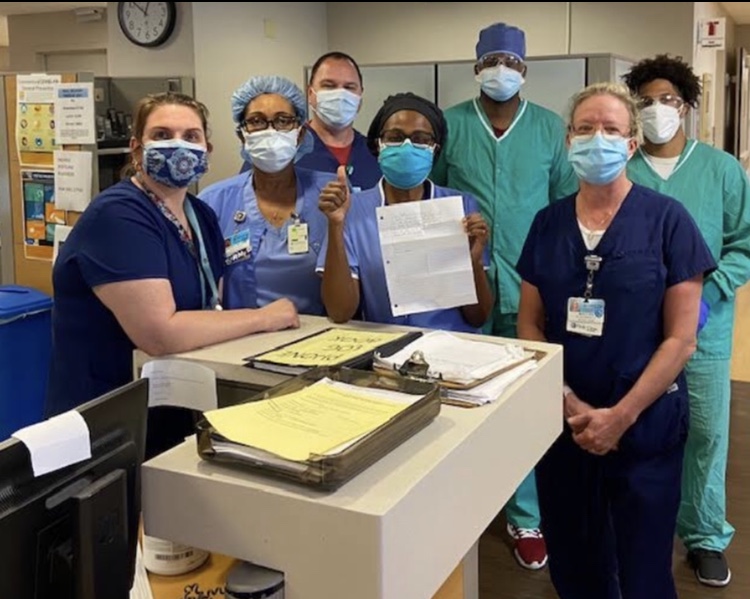 Even though the COVID-19 pandemic has canceled school for the remainder of the 2019-2020 school year, honor societies and clubs from Marjory Stoneman Douglas High School have found ways to support the community. Two of these groups include Key Club and National Honor Society.

Members of MSD’s National Honor Society were asked to handwrite letters for healthcare workers, recognizing their hard work and sacrifices during this difficult time. Students were notified through the text Remind group to participate.

“One of the most important pillars of NHS is leadership, and the officer board saw the steps that healthcare workers were taking in order to care for people as the biggest form of leadership someone could take,” NHS Vice President Kennedy Cobb said. “Seeing as though we couldn’t thank them face to face, we hope that the healthcare workers who are receiving the letters can feel the gratefulness of the community and that our letters will give them the strength to keep doing what they’re doing.”

NHS members were given the option to send their encouraging letters to any hospital in the Miami-Dade, Broward or Palm Beach counties. While many of the upperclassmen mailed their handwritten messages, others had direct access to a hospital through a parent, neighbor or friend.

“My aunt is actually an ER nurse at Florida Medical Center, so I gave the letters to her to bring to her coworkers,” junior Josie Sotter said. “I wrote the letter to tell healthcare workers how amazing they are doing in this crazy time.”

Several NHS members wrote multiple letters. Students were reminded through this act of kindness that despite the circumstances preventing them from leaving their homes, they can still give back to the community with a pen and paper.

“I hand wrote 15 letters and gave them to my neighbor who works at Holy Cross Hospital,” junior Connor Hagen said. “I talked about how grateful I am for all their hard work and bravery. I want the people who receive them to feel like heroes.”

Through NHS, students had the opportunity to motivate healthcare professionals. Many expressed their appreciation and applauded the sacrifices medical staff have made every day in these past months.

“I wrote letters by hand in fun colors in hopes of brightening the healthcare workers’ day [and] sent a total of ten to local hospitals,” junior Zachary Beer said. “I expressed that, given how irregular these times are, their duties keeping everyone well are exceptionally admirable. I hope that the person who receives it understands that their hard work does not go unnoticed, as, even with everything else around them changing rapidly, they are committed to the health of society, which is truly a commendable act.”

Another group of students who also wrote letters is MSD’s Key Club, a group dedicated to service in the community. Key Club focuses on assisted living and independent living facilities such as Aston Gardens, which the club volunteers at regularly. The student-led group is also conducting a pen pal program at Allegro, another senior living center in Parkland.

“Members are writing about what they’ve been up to and what has helped them get through isolation, as well as their desire to see the residents soon when this is all over and volunteer there again,” Key Club’s Aston Gardens committee head Lindsey Salomone said. “I hope [the letters] will bring some joy to the residence.”

Letters written by Key Club members are designed to put a smile on the faces of Aston Garden residents during this time of isolation and quarantine. The high schoolers involved are emailing Salomone their letters. Salmomone then added an inspirational photo, printed them out and delivered them outside the Aston Gardens facility for minimal contact.

“People in these places are especially isolated as their family and friends cannot visit, and they cannot leave [for] activities, so we hope to show them they are being thought of and are cared for by us all,” Salomone said. “There are ways clubs can still make a difference even in quarantine. I also have written a letter to a healthcare worker and I believe everyone should do the same because they are doing so much for us.”

Aston Gardens was chosen as the recipients of the personal letters because Key Club has built a strong relationship with them throughout the school year. Residents even know some of the members personally.

“Key Club is working to support our elderly in nursing homes, since many of them are alone during this time,” Key Club President Rachel Nattis said. “I hope that from these letters, the elderly realize that they are not alone during this time and that even with the world being so dark and gloomy, there are still many positives to smile about.”

Although the coronavirus has limited contact between groups of people, MSD students are discovering ways to boost the spirits of community members. Besides writing letters to healthcare workers and senior citizens, high schoolers continue to uplift each other through simple acts of kindness.